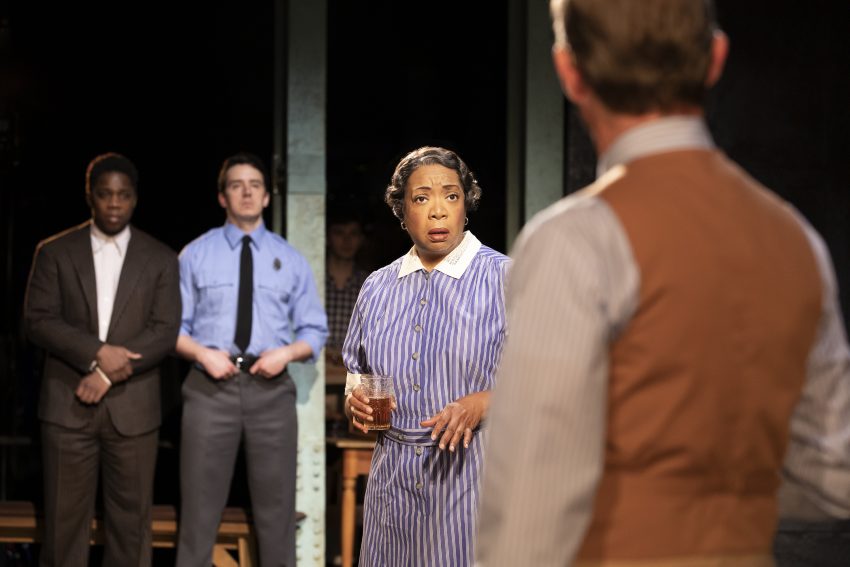 “Before you judge someone, crawl around in their skin,” says Atticus Finch to his children in Aaron Sorkin’s adaptation of Harper Lee’s “To Kill a Mockingbird.”  The excellent Richard Thomas plays morally upright Finch, our favorite small-town lawyer, to a quiet fever pitch, infusing Atticus with steady righteousness and fatherly indignation.

In 1930s Alabama, Finch defends a Black man, Tom Robinson (elegant Yaegel T. Welch), who is wrongfully accused of rape by a white woman. We know how the 1960 novel ends; yet we still root for the outcome to be different.

Sorkin’s adaptation—which received nine Tony award nominations in 2019—controversially shifts the center of the story to Finch rather than his daughter Scout (lively Melanie Moore). Scout, her older brother Jem (Justin Mark), and their friend Dill Harris (Steven Lee Johnson) are each delightfully detailed and offer comically naive (but true) observations. They make their roles sharp, precise, and intriguing.

But, by centering on the fatherly lawyer, we are driven into the action at the trial earlier; we also lose the sense of injustice, as seen through the eyes of a young girl, and the poignant loss of innocence that goes with it.

Sorkin builds out Calpurnia (moving Jacqueline Williams), Atticus’ lifelong Black housekeeper and quasi-partner; but he misses an opportunity to give Tom and Calpurnia fully developed voices. Despite a few crucial scenes, they are embodied by the injustices done to them by white people.

The plot still comes across, after all these years, as a “white savior” story, about a white lawyer who believes in justice for the other. But the two Black characters cannot escape their “otherness,” even in 2022.

In these beautiful fly-away settings, we see the worst of racist behavior: from slimy Bob Ewell (hypnotic Joey Collins) and the threatening Klan, to casual, next-door racism from Mrs. Henry Dubose (gripping Mary Badham), who can never change.

Racism exists, even inside the Finch home. As Calpurnia, the mesmerizing Williams calls out Atticus’ subconscious racism in one wonderfully enlightening scene. Sorkin and director Bartlett Sher show us that the urge to dehumanize, to commit microaggressions even while we posture as race fighters, lies within all of us. Racism is not a light switch that turns on or off; it is insidious, and lives in daily actions.

Arianna Gayle Stucki plays Mayella Ewell like a wounded bird, a cowering woman afraid of her own shadow. Yet Mayella is capable of deep cruelty, lashing out at Tom Robinson with her rape accusation. And it is through Mayella that Sorkin turns up the volume on class, exposing the hierarchies that govern us and our ranking of people.

This painful story feels all too familiar in our Trumpian time: Someone must be blamed for our despair, and it must be the “others.” Richard Thomas’ Atticus Finch exposes these hypocrisies with a knowing look.

BroadwaySF’s touring production of Harper Lee’s “To Kill a Mockingbird” poses questions of morality and truth. The play asks who we are to ourselves and to each other—a powerful and moving work about all of us.