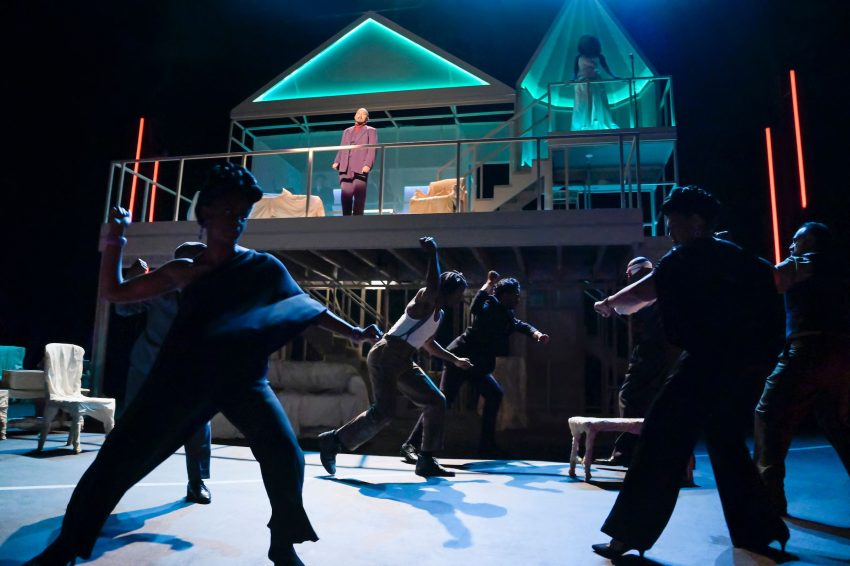 As we settle into our seats, we see Lear’s fragile, multi-story, transparent house—which hints we will be privy to Lear’s secrets. Scenic Designer Tanya Orellana’s set draws oohs and aahs from the audience. Gardley blends past and present, brilliantly mingling Shakespeare’s verse and today’s street lingo—all while dressed in Luc Haac’s stunning costumes.

As King Lear, powerful James A. Williams rules over San Francisco’s Fillmore District, known as the “Harlem of the West” in the 60s. Sadly, the Fillmore’s Black community and its Jazz clubs were gentrified out of existence by freeways and “development.”

Gardley jokes with us about Hayward, Oakland, and Albany. As a native Oaklander, he evokes memories of the Black Panthers, energizing the superb cast with rhythmic African American vernacular. They tell it like it is!

Sultry Velina Brown plays the Black Queen who drifts in and out of the play in an elegant, ghostly white dress. While Bay Area legend Marcus Shelby plays the bass, Brown softly sings jazz standards like “The Ghost of Our Love.”

After the Queen’s death, Lear is bereft. He plans to divide his Bay Area kingdom between his three daughters, providing they can express their love to his ego’s liking. This classic story of an egotistical self-centered father and the wrongs he does to his daughters gets a modern makeover.

Second daughter Regan (forthright Emma Van Lare) echoes Goneril, conspiring with her cruel husband Cornwall (stalwart Dov Aram Hassan) against her own father. But the youngest daughter, Cordelia (engaging Sam Jackson), refuses to compete with her sisters for the biggest slice of land.

CORDELIA (to Lear):
Forgive me, your majesty, as I seem to lack the glib and oily art
For puffed-up orations.
. . . . .
If anything … I lack an ever-begging mouth;
That I’d rather keep closed than sweeten with lies just so words can come out-

Lear becomes more demented as he rages, and his torment grabs our hearts. We fear for him as plots against him are exposed. As the declining king, Williams brings great physical and emotional energy to the role.

In a parallel plot, another high-born father, Gloucester (charming Michael Asberry), also mistakes the schemes of his Bastard son Edmund (brilliant Jomar Tagatac) for truth. Worse yet, he banishes his honest son Edgar (clever Dane Troy). When Edgar flees his father’s home, he disguises himself as senile Uncle Tom—a brilliant twist on Shakespeare’s Mad Tom—and a reflection of Lear himself.

Edgar wants to do something for his community, rather than live in his father’s wealthy bubble. Both Lear and Gloucester, two egotistical fathers, pay the ultimate price for valuing their wealth and power over love and family.

The Comic (versatile Jackson) ridicules Lear’s follies, channeling a sophisticated Sammy Davis, Jr. with his cigarette and relaxed joke telling. Jackson’s physicality, delivery, and poise is so compelling I’d be happy to watch a show of her doing just this act.

Multi-talented Kenny Scott brings craft, clarity, and comedy to three crucial roles. Confident, poised Cathleen Riddley brings tenacity and spunk to her role as Countess Kent, Lear’s loyal servant. Riddley highlights the American struggle between loyalty and lies. Who knows, she may reign in the end.

What a feast of brilliant stage craft, vibrant verse, and Black history! Gardley’s “Lear” is a once in a lifetime experience. Don’t miss it.