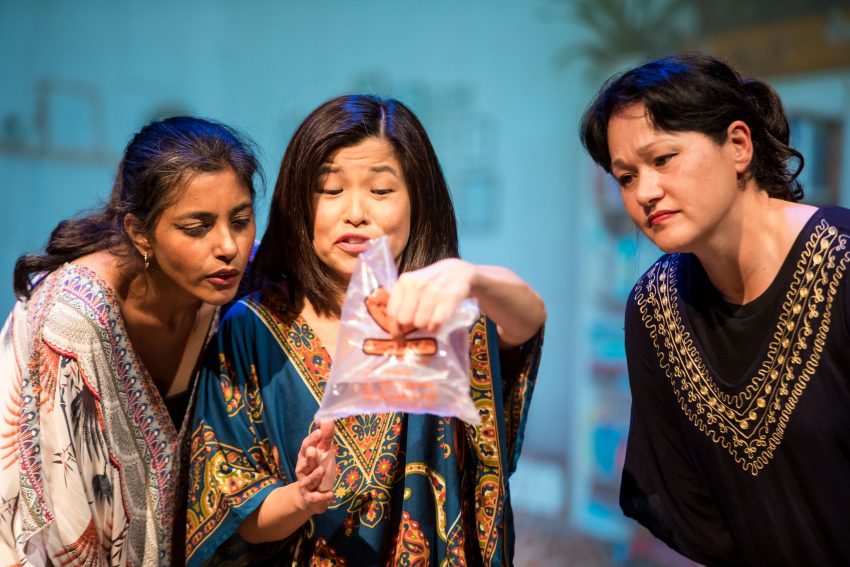 In “Where Are We Going?” playwright Cindy Cesca Yoshiyama cleverly showcases a bachelorette (Mithra (Lee) Vankipuram) and her two friends, as they embark on a rogue gondola ride in Venice, Italy. Their journey turns into a self-discovery. As the bachelorette tries to disappear into her fantasy one last time, her friends call her out as delusional.

The three women engage in intense, intimate conversation, which calls our attention to the micro-aggressions that Asian American women face every day. No matter how well they perform academically and professionally, they are stereotyped by race and origin. In high school, I also felt that no matter who I was, I would always be the “China Girl” in the majority white suburban town near Chicago.

The friends (Karla Acosta and Karen Offereins) clench their fists tightly as they try to prevent the bachelorette from apologizing to her Italian ex-boyfriend (Alan Coyne): “Don’t give up the power!” they scream. They leave us wondering just how often Asian women submit to stereotypes and get taken advantage of.

We were brought up as reconcilers, but sometimes the Western world pressures us into wielding power. We shouldn’t need to harden up to feel seen.

As Jinnie, Offereins casts a melancholy gaze into the water, connecting with her ancestors through the voices in her head. In “Written in Water,” I resonate with her struggle between personal aspiration and family expectation.

While Jinnie is thinking about having children to please her parents, Sanjay (Mithra (Lee) Vankipuram) is seeking her friend’s support for a gender transition. In Jinnie’s eyes, we see generations of Mongolians. Offereins perfectly embodies Jinnie’s struggle to reconcile the clash of American hyper-individuality and Asian humility. Jinnie feels like she must honor her ancestors’ “line of love and sacrifice” that makes her comfortable life in America possible.

Should she pay it forward by sacrificing what she wants to achieve in her marriage? Playwright Lisa Kang leaves it up to us.

The mainstream American media fails to present Asian Americans’ struggles because we are not considered a true minority in America. We are model minorities who often achieve a higher socioeconomic status which masks the underlying difficulties we face.

All these characters face subtle discrimination and minor aggressions, making their stories truer than what we see on TV and in movies. “Evolution” helps us realize that these women’s struggles are real too.

Come this weekend to celebrate Ferocious Lotus and an array of funny and thought-provoking Asian American experiences!