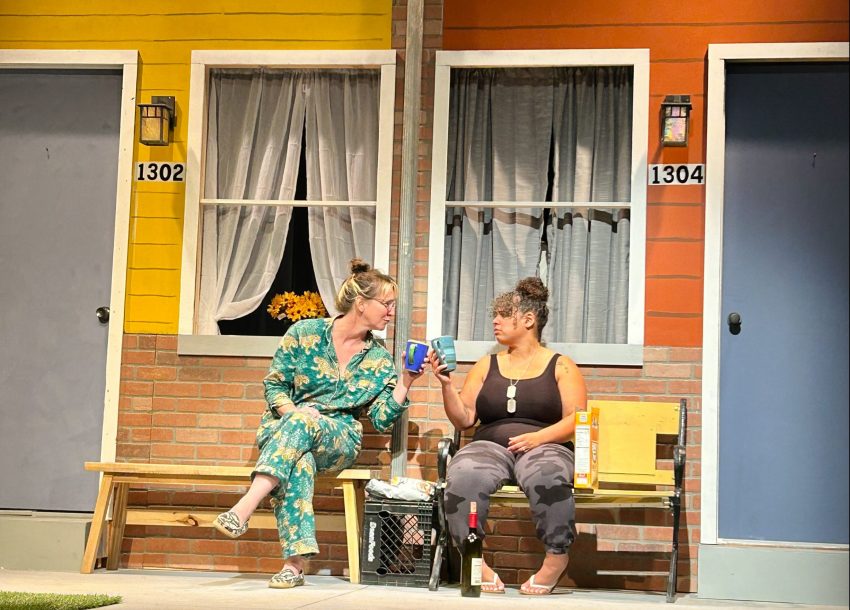 “The Music of Moms” shows how Black men and women are forced into the military for school or work. And one woman’s husband pays with his life in Iraq, while her dear friend and neighbor says he was a proud soldier who died for “patriotism.”

How did they get to that point? They live side by side, in cute matching little houses in El Paso, Texas. The colors are vivid yellows and browns and the two moms are hilarious, helping each other to give birth and to raise two boys. They live side by side for over 20 years, while their front windows reflect holidays and differences. They joke and laugh together charmingly, like sisters.

But something happens to May (fierce Chelsea Bearce) when Obama becomes president. As a Black mother, she begins to move out of her shell and struggles to become a teacher. But Ethyl (intense Kim Donovan), her white friend, gets sucked into Fox news. May goes out into the world, while Ethyl tumbles down the terrifying Tucker Carlson rabbit hole. Victoria Evans Erville’s sharp portraits of two neighborly moms, from the Clinton era to the Trump disaster, embody our history, vividly.

With a light touch, Erville shows how race and religion begin to separate friends. We see time passing as familiar political signs change in their windows and they identify with the warring parties:

MAY:What were his choices Ethyl? His people didn’t have connections. There was no‘somebody’ to help him make his way. The military was Randall’s only way out.
Yes he was proud to be a soldier but look where it got him.

Their riveting arguments wrapped in human feelings reveal flaws in both conservative and liberal ideas.

ETHYL:
I’m not trying to argue with you especially not today but you’re wrong.
Randall was intent on making the military his career.
He took pride in being a soldier. He felt a part of something.

The two lifelong friends embody two ways of seeing the world. Being Black and white, they are forced into conflicting sets of ideas—infuriated by each other’s choices. As they debate, May and Ethyl struggle to hold onto the love and laughs they shared, as the women move sympathetically through time. May feeds Mexican workers in the fields, while Ethyl claims that May doesn’t care about their own jobless neighbor starving.

And it’s not just racial. Ethyl’s gay white son Troy (engaging Dylan O’Shea) tries to come out to his mom, but she’s not hearing it. Even as she claims she will listen, her assertiveness discourages Troy in a moving and sensitive scene between the nervous son and his fearful mother.

Meanwhile, May’s straight son RJ (genuine Elijah Waller) listens impatiently to his Mom’s hoodie lecture, trying to save him from the fate of Trayvon Martin. Who will get shot first in Texas—the Black son or the gay son? And the boys have their own differences, played out vigorously onstage as they argue about going together to gay marriage and Black Lives Matter rallies. Erville engages us by embodying today’s news in her characters’ feelings and frailties.

Ethyl becomes more and more remote from her friend and alienated from her own son. May goes from a suffering widow to a decisive woman. The performances are emotionally rooted in the fears of real parents and real children. Erville has an ear for the cadences of each character, composing their ideas into tonal music.

The script reflects the fires that burn all around us when the friends and teens get in each other’s faces and assert their ideas as untouchable. Erville has written an idea play that works: she puts the news into living characters that get us thinking long afterwards.

“The Music of Mothers” —written and directed by Victoria Evans Erville, by TheatreFirst, at Live Oak Theater, Berkeley. Info: TheatreFirst.com – to October 23, 2002.