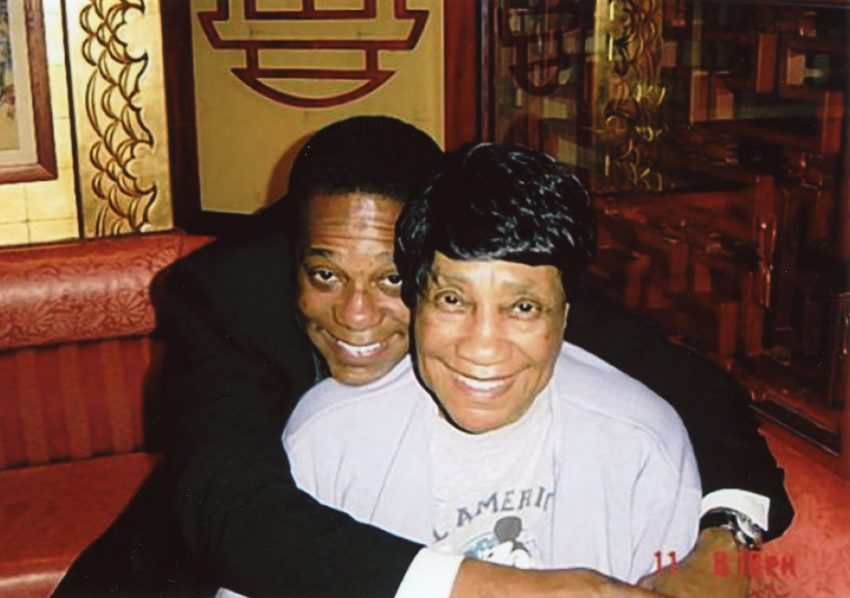 Brian Copeland greets us as though we were friends whom he invited into his living room to hear a personal story. He amuses us with a tale about spending $100 on his family genealogy, just to discover they came from Africa!

Then he pulls out an imaginary paper from an imagined box, holding it in the air. He explains that it’s from one of Grandma’s boxes: “. . . took me years to build that strength to explore those boxes.” It’s the guardianship papers that his 57-year-old Grandma signed promising his Mama to take care of her five children, ages 1 to 15. Brian was that 15-year-old.

Those papers spur him to share his first year with Grandma. Years later, after his divorce, he, too, becomes a single parent for his three children.

In “Grandma & Me: An Ode to Single Parents,” Copeland artfully switches back and forth between his life as a 15-year-old with Grandma, and his adult life as single Dad.  Amazingly, Copeland balances melancholy and humor, keeping us engaged with two parallel stories for two hours.

Grandma did it all, including making “real” hot breakfasts every day. She would buy them real ice cream cones when she had the money. Grandma was poor, a permanent condition for her, with no way out. Years later with his three kids, he was temporarily broke, but never dead-end poor, like Grandma. Grandma, always stoic, never showed emotion: “Not crying was her super power.”

Later, he mirrors her actions as a single parent. “Grandma knew what I needed,” he exclaims. He makes his children hot breakfasts—and declares their motto: “The Copelands are made of steel.” Grandma taught him to “cope.”

When Brian sneaks out to meet his absent Dad, Grandma knows he is out after curfew, but says nothing. As a fickle, angry teen, hurting over his mom’s death, Brian frantically saves for a car, but he faces disappointment and generously gives his savings to Grandma. He learns about quite understanding from her.

Copeland catches our attention by sharing the common trials and tribulations that afflict all single parents—male and female.

“Fear,” he says, “is what most parents feel,” and “denial is how we get though the day.” When his daughter’s hair is falling out over the stress of missing her mom, he tells Carolyn it’s really regenerating. We laugh in recognition of those days with our own families. As a master storyteller, Copeland’s empathy touches us deeply.

Copeland’s tribute to his grandmother is also a tribute to him as son, grandson, and father. His homage to Grandma visibly moves us all. It’s true—the Copelands have nerves of steel, courageously exposing hidden conflicts as he remembers a special woman who performed nobly without an audience. Brian Copeland’s reservoirs of talent and empathy make him a unique, unforgettable artist. A must see.