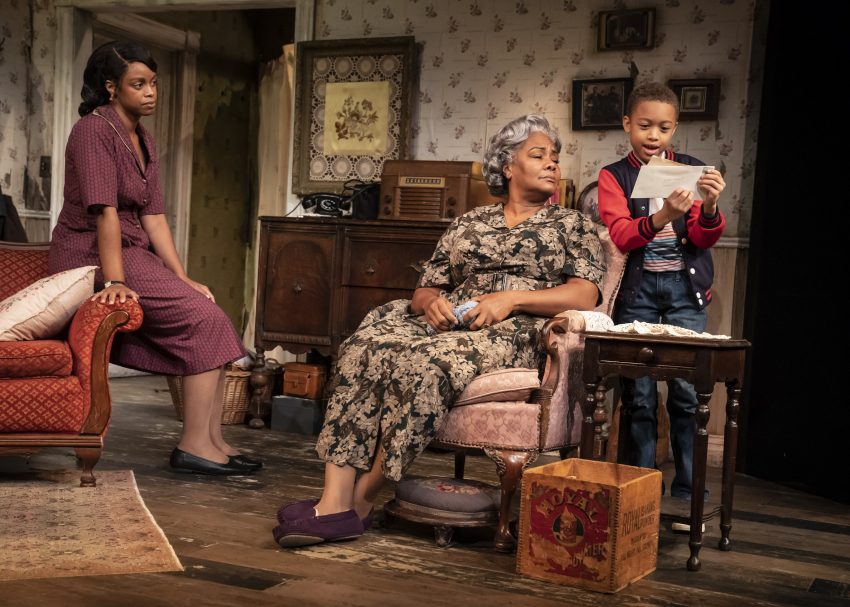 Lorraine Hansberry Sees Into Our Segregated Past & Present

At the New York Public Theater, director Robert O’Hara’s fresh adaptation of Lorraine Hansberry’s 1959 masterpiece “A Raisin in the Sun” features superb performances and a magical melding of past and future. O’Hara’s bold staging unlocks insights into characters and politics, uncovering how depressingly little the Black experience in America has changed in 63 years.

We meet the Youngers, a Black family in Chicago who are full of grief, insecurities, and dreams deferred. As the Youngers face a treacherous system, O’Hara shows how their sense of family and purpose holds them together.

Clint Ramos’ brilliantly detailed set recreates a lived-in apartment, full of yarn for knitting, empty beer bottles, holes in the wall, and a front door that gets slammed so often I feared it would fall off the hinges.

On the South Side of Chicago, Lena Younger (indomitable Tonya Pinkins) reigns as matriarch with a biting and profound performance. Pinkins can move us to tears of laughter and sadness. Trapped in the crowded apartment with her bustling family, Lena mourns the recent death of her husband. Pinkins brings out Lena’s grief with touching emotions and gestures as she cries out for help from her dead husband. Pinkins embodies a woman besieged by grief and responsibility.

Lena has always dreamed of buying a home for her family but without money the family is imprisoned, financially and socially, in the apartment. Lena’s son, Walter Lee (haunting Francois Battiste), his wife Ruth (stellar Mandi Masden), younger daughter Beneatha (lively Paige Gilbert), and grandson Travis (wistful Camden McKinnon), each have dreams. But their dreams clash and despair always hovers.

As Lena plans for the $10,000 life insurance payment, the future looks hopeful for the Youngers. But how they use it turns into a battle. Lena wants to buy a house in a white neighborhood, and give the rest to Walter Lee—with a portion set aside for Beneatha’s medical education.

There’s a problem though. Walter wants to invest it all. His ambition is clouded by hope for riches and freedom from working for a white man. With deep conviction, Battiste plays out Walter’s capitalist delusions, expressing a frightening and misogynistic undervaluing of his own sister.

As they argue over how the money should be spent, Walter lectures Beneatha: “Who the hell told you you had to be a doctor? … go be a nurse like the other women.” Beneatha’s lack of surprise speaks loudly about her perception of her brother. Their conflict comes to a climax as Walter’s selfish mistakes catch up with him.

What follows for the Younger family is an intense and humorous exploration of the strain on Black families in the face of immense financial, social, and institutional prejudice.

O’Hara’s modern “Raisin” delivers an updated version of the Youngers. He depicts Lena’s late husband’s specter, an off-stage sex scene, and a shocking new final staging that stunned me.

I left The Public Theater with a sick twist in my stomach and hope for the future. O’Hara has given us the 50s bleakness, and modern survival, with a glimmer of light. This new “Raisin” and its superb, moving cast offer a challenging, conflicted, and candid picture of Black life then and now.

“A Raisin in the Sun” by Lorraine Hansberry, directed by Robert O’Hara, scenic design by Clint Ramos, costume design by Karen Perry, lighting design by Alex Jainchill, sound design by Will Pickens, at The Public Theater, New York, N.Y. Info: PublicTheater.org – to November 20, 2022.

Banner photo: Mandi Masden, Tonya Pinkins, and Toussaint Battiste in The Public Theater revival of “A Raisin in the Sun.” Photos by Joan Marcus