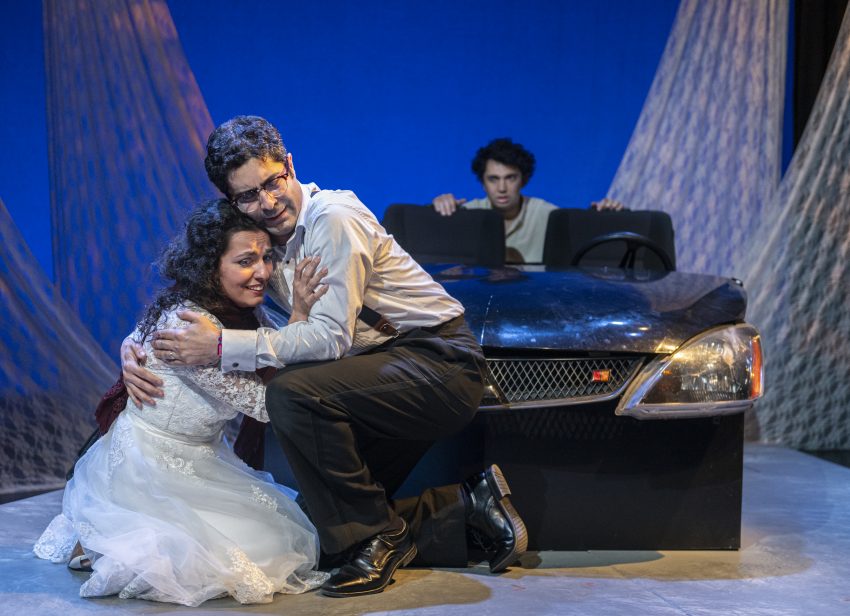 In 2009, a people’s rebellion broke out in Iran—and thousands challenged the fraudulent election of a right wing president. Afther that, people’s submission to the religious authorities was never enough. It never is—every time you dodge an accusation, another transgression pops up.

Now we have a play that explains extremism and what it does to us—a magical tour of one witty couple’s poetic road trip out of submission. In that year of uprising and confrontation, one sweet, articulate Iranian couple take a long trip in their wedding dress and tuxedo. They clash while a fumbling assassin pursues them.

They drive to the Caspian Sea to her mother’s house in the country, buoyed by witty and wonderous scenic design, lighting, and costumes.

Every year, for ten years, they make the long drive, dressed in wedding gear, to show her mother their continuing bliss. But bliss has faded—there’s the rub.

But they are still charming and still young—she’s an English teacher and he’s a linguist, fascinated by languages that hark back to the mythical Tower of Babel, a nearby roadside ruin.

Devoted Davood (astute Damien Seperi) was questioned by the police and taken to jail many times. Their jobs are in peril, and the all male mullahs are messing with their finely tuned brains. Religious oppression sinks deep, dispelling obedience, conformity, and birth-rates, too.

Davood and Donya (ardent Dina Zarif) are rebelling in a new, middle class Persian way. To escape the crushing CONFORMITY of a religious state, they concoct fascinating disagreements. Their charming dialogue in the onstage car pits submission against rebellion—true to past and present Iranian uprisings.

Their fanciful onstage auto—complete with hood, blinking lights, and back seat—is surrounded by an array of white lace curtains. The wispy curtains suggest memory, dreams, and the contented life that’s out of reach.

Playwright Naghmeh Samini’s subtle dialogue offers us surprising insights in its premiere at Golden Thread Productions. The translation and direction by Torange Yeghiazarian conjure enchanting language, fierce fantasy, and magical thinking. In a delicate balance, the realistic couple fend off the young intruder bent on a murder mission. Can you figure out his identity?

Their love is never in question, but they are at a precipice—and they don’t know which direction to steer their little car out of lace-curtain territory.

Will Daniel manifest himself, finally, as a force of Nature? Happily, we are on that unpredictable road trip with them. So, grab hold of the wheel and catch what happens at the Motel Babel. Taste the wild roadside berries. It’s a rollicking and rewarding ride!