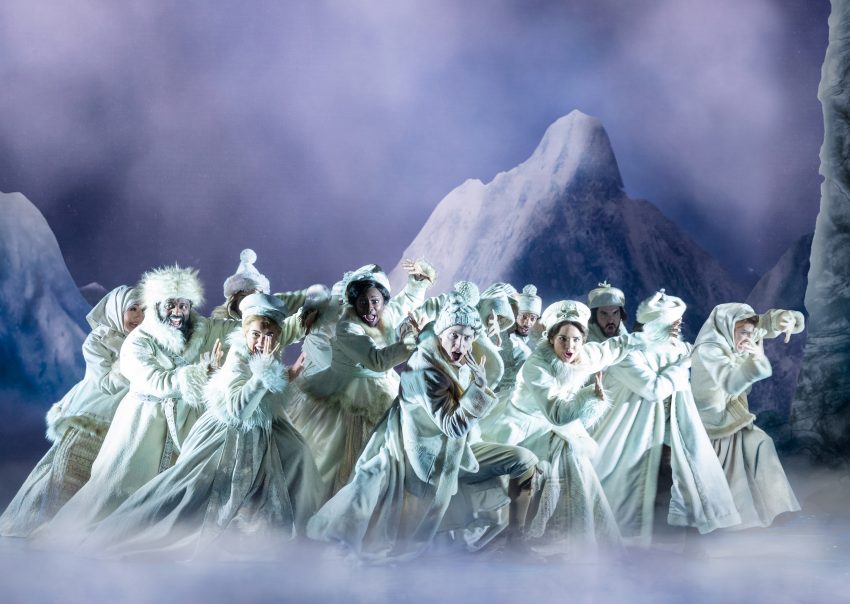 Adapted from the highest grossing animated film of all time, “Frozen” the musical has landed hook, line, and Swarovski-worthy crystalline sets at the Orpheum Theater. Recipient of numerous Oscar, Grammy, and Tony awards for its creators, “Frozen” is a sheer delight for adults and children alike.

Like that other mega-hit “Wicked,” “Frozen” delves into two sisters’ attachment and loss, played to the icy hilt by the gifted Caroline Bowman as Elsa and Lauren Nicole Chapman as Anna.

From birth, Elsa has been given the unique power of cryogenics, the ability to create ice, snow, and freezing temperatures around herself. In a tragic accident, the young Elsa almost kills her sister, and they are separated. But the two women eventually find themselves and their love for one another. And their journey forms the heart of “Frozen.” The song “I Can’t Love You” reveals the sisters’ struggle to connect and hold on to each other.

“Frozen” is further enhanced for the stage with 12 new songs sumptuously accompanied by mostly local instrumental stalwarts under the assured baton of Faith Seetoo. Of course, it all builds to the Oscar winning song “Let It Go,” powerfully rendered at the end of the first Act by the enchanting Caroline Bowman.

As the shimmering, crystalline scenes of Set & Costume Designer Christopher Oram drop into place, the audience gasps with joy. Elsa’s rather drab outfit magically flies away revealing the renowned blue-silver, bejeweled dress famous from the film.

In the world of “Frozen,” the wonderful, animated characters of Zven the stag and Olaf the snowman magically mesmerize us, thanks to Puppet Master Michael Curry. We marvel at how one actor can create the walking, clopping, blinking, and knock-kneed, four-hooved Zven. His chiropractor is worth his weight in gold.

A Broadway cast of massive talent include Dominic Dorset as Kristoff, Will Savarese as the duplicitous Hans, Jeremy Davis voicing Olaf, Michael Milkanin as Oaken, and Evan Duff as the effete Weselton.

It’s not the perfect adaptation: “Lion King” did that. Act Two bogs down with filler songs including (and I am NOT kidding) a sauna song “Hygge,” with the ensemble going “Full Monty,” hiding body parts with Loofa leaves.

Still, the little girls in the audience, many wearing Princess outfits and tiaras, and a few of the older audience members sing along with their favorites, getting their money’s worth.  If they want even more, the Swag shop in the lobby offers an array of goodies.

“Frozen” is a delight and I immediately went home and watched the film again, reminding myself of the infinite possibilities of love.