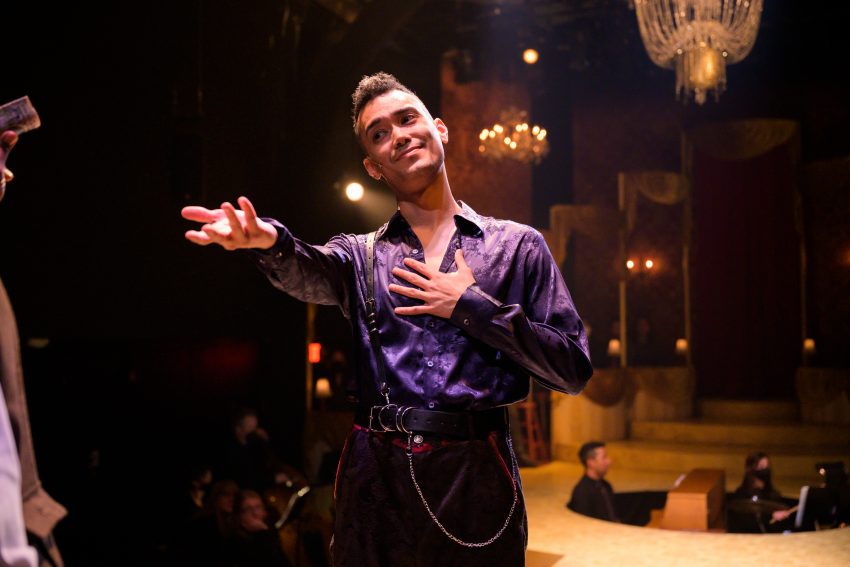 As war rages on in Ukraine, American politicians look at the ongoing suffering, and comment from afar. In “Natasha, Pierre & the Great Comet of 1812,” composer/writer Dave Malloy exposes the smugness of these political “pundits” about the realities of war.  Malloy tears open the lives of Russian aristocrats and oligarchs who profit from war—but never fight.

Under massive chandeliers and non-stop singing, Pierre (Albert Hodges), a scholar in a blue vest, sings with bravado: “There’s a war going on out there somewhere, and Andrey isn’t here.” Pierre locates us in Tolstoy’s War and Peace, introducing the aloof Russian nobility who indulge themselves in wine, women, and song—even during war and invasion. Sound familiar?

Malloy gives us a front-row view of the seduction and despair of the beautiful young Natasha Rostova (Jacqueline Dennis). Dennis encapsulates Natasha’s innocence in her tender rendition of “No One Else.” She misses her lover away at war, Prince Andrey (James Mayagoitia).

After the upbeat “Prologue,” the enthusiastic cast explodes in vibrant flowing dresses and fancy vests. The decadent Russians introduce themselves in serio-comic songs: “It’s a complicated Russian novel! Everyone’s got like nine different names.”

During the slow first act, we marvel at Nina Ball’s stunning staging. Elegant golden cloth hangs all around and the fabulous long catwalk thrusts out, putting the actors next to us. We are transported to a decadent nightclub, as the set casts its spell, drawing us into the aristocrats’ self-dramatizing affairs.

Nick Rodrigues is superb as Anatole, walking with a striking swagger. Rodrigues shines as champion seducer, scheming with every sensual movement. Even though Anatole destroys lives, Rodrigues makes him irresistible–overflowing with charm and charisma.

Anatole and his crew represent decadence: he’s careless, ruins marriages, and takes Pierre’s money to gamble all night. But he also represents an escape for naive Natasha, who has been dissed by her fiancé’s family. Anatole gives her exactly what she wants—acceptance and adventure. To heck with Andrey at war!

In The Opera scene, bright lights flash in vibrant, disorienting hues, while masked players perform bizarre acts. We feel as intoxicated as Natasha when Anatole makes his move, pulling her close, breaking barriers. It’s heartbreaking to watch how she tries to justify giving in. Her innocence stands no chance against Anatole’s practiced preying.

The rich, elderly Pierre speaks out boldly in all the right ways. This studious, unworldly old guy is respected, but he’s lost any point to his studies. In that decadent world, he wishes for better, but has no power. Our hearts break as he spends nights in his study, unable to find a purpose amidst the extravagance around him.

“Natasha, Pierre & the Great Comet of 1812” plunges us into the narcissistic lives of Russian nobility, utterly removed from the war and real life. Malloy’s overview reveals the dark carelessness of those with wealth, who use and abuse young women and men— cannon fodder for their lust and their lies. The grand spectacle looks too familiar, again, today.