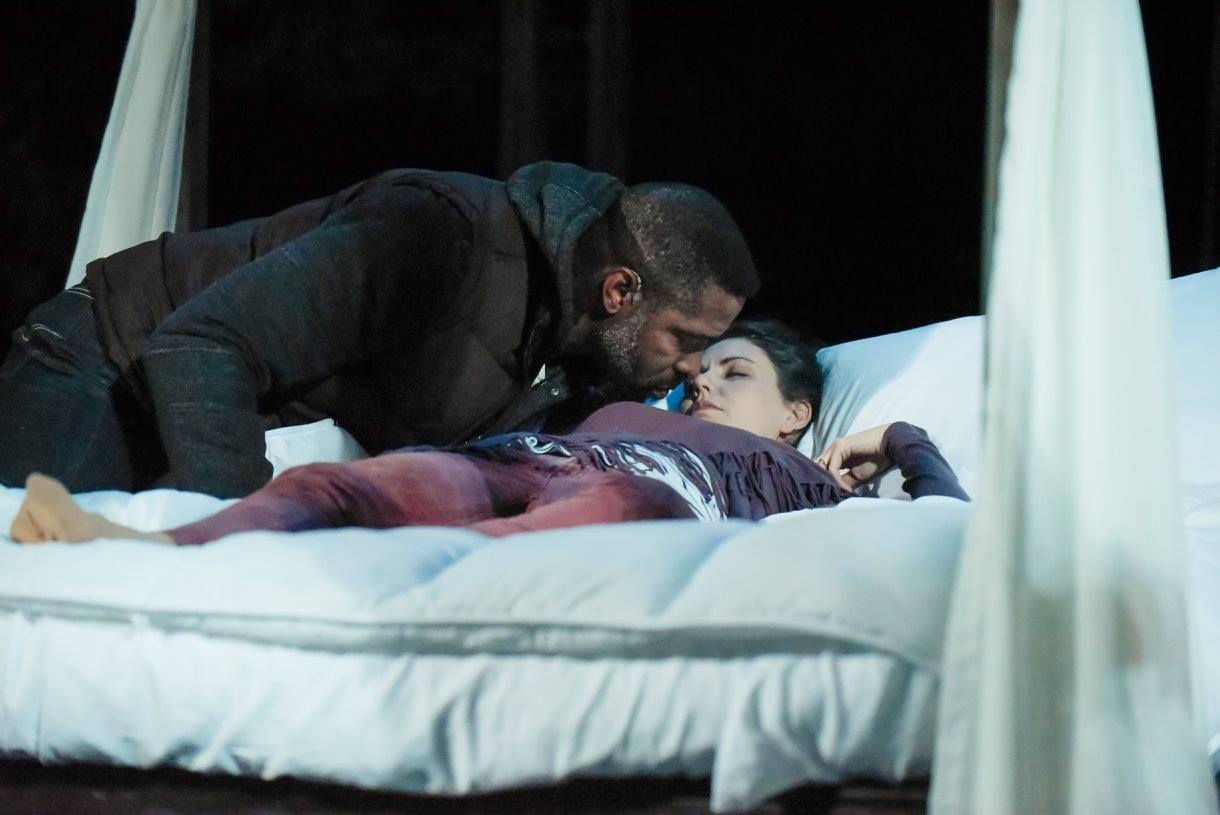 Eric Ting’s bare stage “Othello” at Cal Shakes modernizes Elizabethan issues from 500 years ago for the U.S. in 2016. Shakespeare’s exposure of racial hatred, blatant misogyny, and Islamic degradation are exposed and examined in this ambitious, experimental production.

The players are dressed in sweats and hoodies, as if at rehearsal on a bare stage.  Ting makes a point of dressing his players as if they were going out to the grocery store. In street clothes, they look like you and me, suggesting that the play reflects life happening all around us.  You do not have to be in Venice in 1604 to face oppression and brutality. Othello is an Outsider because he is black, a former Muslim, and married to an aristocratic white woman. Like Othello, many an Outsider can still walk down the street and feel objectified, scrutinized, or alien. Among the many striking jobs of acting on that stripped down stage, Michael Storm makes an especially passionate and suffering Brabantio. Storm’s precise, powerful father of the bride, and his later role as Montano raise the stakes. James Carpenter is regal and ruthless as Iago. Elizabeth Carter is gripping, hypnotic, and magical to watch as the Duke and Bianca.

Lance Gardner makes a warm, engaging, and thoughtful Cassio; while Matthew Baldiga shows us exactly what a lame weakling looks like in his Roderigo. What a contrast to the smart, imposing and compassionate Othello of Aldo Billingslea. The forthright and independent thinking Desdemona of Liz Sklar chooses well in choosing her Othello. And Julie Eccles boldly asserts both feminism and loyalty in her devotion to her Lady. This is a play about ideas and the actions that flow from them.

All these finely focused actors are sitting on chairs in a circle. Even when the scene calls for two characters to be alone, the others are right there, witnessing the plotting against them. Prejudice, gossip, and rumor fill the air and destroy the social fabric. We see Iago spin his web of lies, as he looks directly at the hopeless Othello, pumping up the dramatic irony. Iago, representing the contemporary bigoted white man, turns out to be “far more black” than Othello.

In place of large scale, elaborate and costly sets, this experimental production uses the shuttering of light to change the mood from moment to moment. Giant video screens and a few shocking light and sound innovations dress up the show’s powerful minimalism.

Artistic simplicity and modern intrusions highlight the new point of view of the production. At a critical moment, an actor will approach a stationary microphone, as if to make an announcement, and he or she explicitly addresses issues of racism and spousal abuse. These stop and go “breaks” startle the audience.

These experimental interruptions take the risk of draining the drama out of the play, or elevating it to new heights, guiding us to a deeper understanding of “Othello,” today. You decide.  These innovations explicitly involve the audience in the great debate taking place on  stage. We are forced to consider the play from the perspective of women under patriarchy and in the light of Black Lives Matter. Ting points the finger directly at the audience and says, “Hey. This is bullshit, and needs to change.”

The relationship between Othello (Aldo Billingslea) and Desdemona (Liz Skyler), feels wonderfully true. Desdemona, for centuries, has been has been made into a martyr. Here, she stands for women who have been oppressed and forced to submit to the selfish desires of men. As Desdemona, Skyler confronts the misogynistic claims with fervor. She stands toe to toe with Othello, and steals the power from him. This Desdemona refuses to be a victim.

Bllingslea portrays our valiant Moor as both soft and strong. He shows us a complex Othello, who yearns to be a just and fair man. But yearning is not enough, and Billingslea makes us believe that such a man will be crushed by the prejudices and racism of the present day, too.

Some critics have said that the play could very well be called “Iago” because of his dominating manipulation of Othello. James Carpenter plays Iago with clarity and assurance. His Iago is an aristocratic character, with an eloquent voice and strong stage presence. These qualities bring him closer to the noble general, but they also obscure the elemental differences between the valiant and sympathetic Othello, and the villainous, conniving Iago. Are they cut from the same cloth? Carpenter’s Iago succeeds only too well in seeming like a good buddy, rather than a secret enemy.

Cal Shakes’ “Othello,” exposed on the great outdoor stage of the Bruns Amphitheater in the Orinda Hills takes your breath away many times. Then, it makes you think. You may never see an Othello like this, again. The experimental nature of Eric Ting’s “Othello” deals intensely with the issues of the play, making them new and urgent. Welcome to a new age of theater.