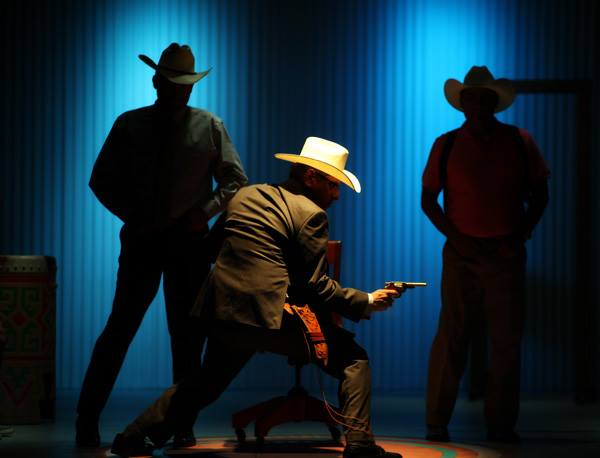 The flamboyant yet thought-provoking production of “Nogales: Storytellers in Cartel Country” at the Magic Theatre engages with issues of immigration and Latino cultural identity in a breathtaking whirlwind of bold imagery. “Nogales” uses sharp comedy and satire to expose a 2010 murder, one for which U.S. Border Patrol agent Lonnie Ray Swartz goes to trial on November 7. The decision, along with the fates of each character in the production, remains up in the air.

Playwright Richard Montoya and director Sean San José team up to produce this mixed media piece with Tarantino touches: funny, detailed monologues, pop culture allusions, and bold juxtapositions of video. Montoya has been bringing immigration and border clashes to the fore, since his early days as a co-founder the famed performance trio Culture Clash. “Nogales,” a Rolling World Premiere, grows out of a collaboration between the Magic Theatre, Campo Santo and Borderlands Theater of Tucson, Arizona. You will find “Nogales” playing just above the Mexican Museum at Fort Mason, San Francisco.

“Nogales: Story Tellers in Cartel Country” presents the findings of Montoya’s investigation into the shooting of Jose Antonio Elena Rodriguez, a 16 year old Mexican boy who was gunned down by a U.S. Border Patrol officer through the border fence, close to his own backyard in Nogales, in Mexico!

Montoya and San Jose combine striking audio and visual layers to provide seamless transitions, as storytellers explore the neo-colonial conflicts and characters in the border town of Nogales.  And they make us, the audience, into the jury. The fast pace of the action creates a carousel of intriguing comic roles, played powerfully by the energetic and committed cast.

Playwright Montoya, himself, delivers a stunning satirical performance as the notorious, extreme right-wing Sheriff Joe Arpaio of Maricopa County, Arizona. “Nogales” sets the stage for the conviction of Sheiff Joe for declaring “Open Season” on Mexicans. When the Interviewer (San José) interrogates him with serious questions, Sheriff Joe slithers behind a veil of outrageous racial slurs and sloppy karaoke.

In a powerful scene, projectors illuminate the corrugated metal backdrop, displaying personal items confiscated from 3,000 people who have been killed at the US-Mexican border over the past ten years. Flashing before our eyes, we see combs, bibles, $100 bills, a stuffed toy, lip balm…  These poignant stolen bits of personality contrast sharply with a sea of  generic red dots on Arpaio’s Death Map.

We are reminded of the murdered boy’s grandmother’s fondness for her sweet, “always happy” grandson with the “most pretty smile.” During the autopsy of the boy, a haunting drumbeat echoes the twelve gunshots that tore into his body. The Mexican medical examiner declares, “This son of Nogales was butcher(ed) on the streets of his home, as if it was a god-damned turkey shoot.” Jose’s bullet-ridden body shows the reality of “Open Season” on Mexicans in Arizona.

“Nogales” treats us to a panoply of super-sized satirical characters who thrive on both sides of the over-patrolled and militarized U.S.-Mexico border. We watch in wonder at the drunken antics of suited-up vigilantes in western hats dancing on a stripper pole. And we feel humbled by the humanity, the comedy, the tragedy of beautiful people living their lives under oppression in Nogales, on both sides of the border. Montoya weaves the diverse stories of individuals into one harrowing tale of isolation. In a world where lost lives just become statistics, Montoya highlights each personalty as vibrant, struggling, hopeful.

Bravo to the Magic and to Montoya for exposing the realities behind the false immigration debate. Bravo to the cast for making us feel what others feel, so we can join in the debate and the delights and the dilemmas of “Storytellers in Cartel Country.” Get thee to the borderlands at The Magic Theatre for an enlightening and entertaining event.