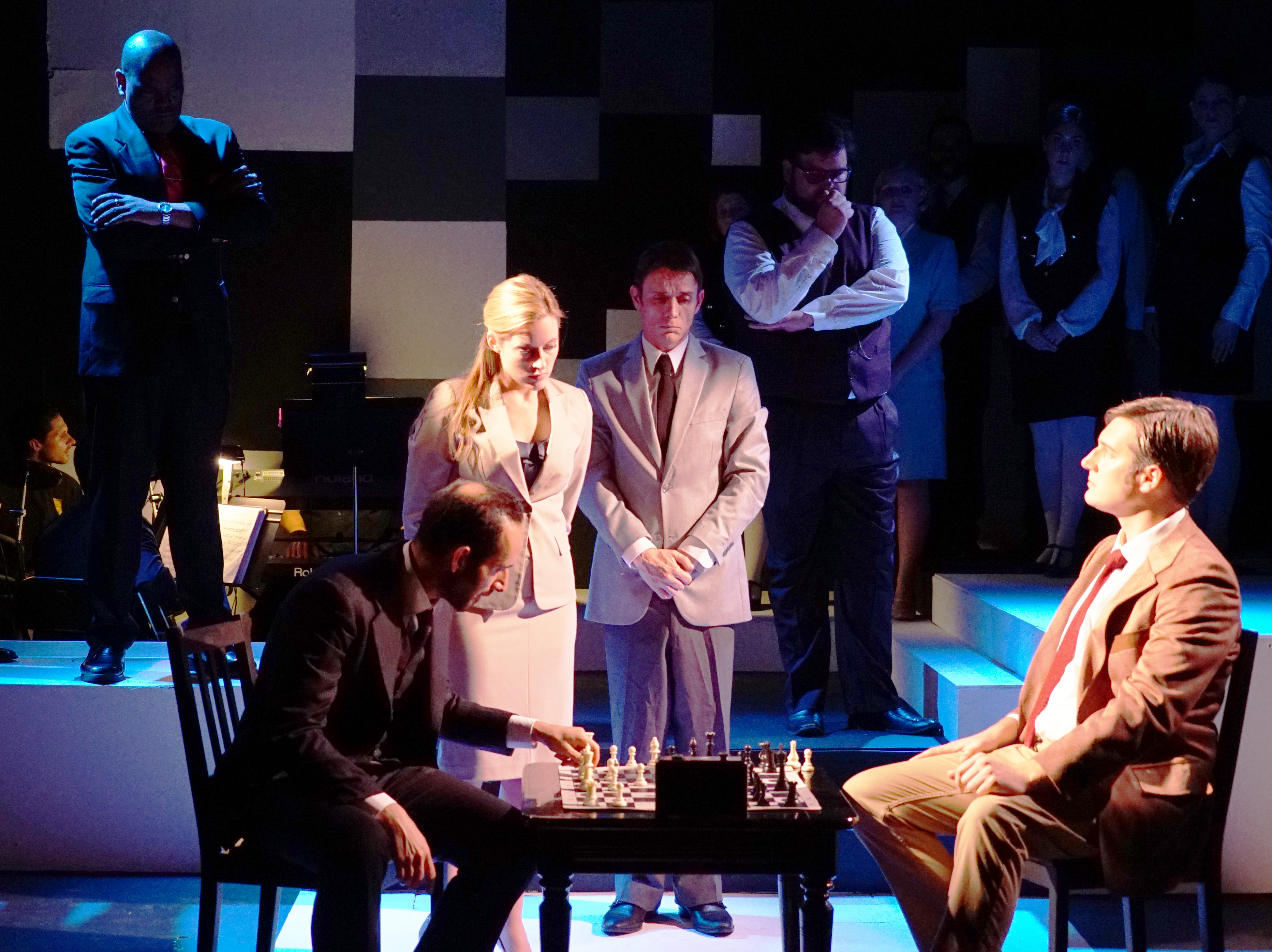 Go see “Chess,” still playing at the Custom Made Theatre for the great music, and an epic Cold War story-line set in their intimate Union Square playhouse.

Beyond the Eastern and Western fronts, “Chess” certainly takes us on a wild ride. The music will have you bouncing in your seat one moment and fighting back tears the next. Set in the 70s, at the height of the Cold War, we meet American chess champion Freddy Trumper (Mischa Stephens), who is based on Bobby Fisher, the notorious, unpredictable bad boy. The stakes couldn’t be higher as he faces off against Anatoly Sergievsky (Chris Uzelac), his Soviet counterpart. Florence Vassey (Leah Shesky) Freddy’s lover, assistant, and apologist is intrigued by Sergievsky who is more reserved, aloof, and mysterious than the Trumper. Talk about back to the future! The first act follows Freddy’s self-implosion, Florence’s falling in love with Anatoly, and the championship match. Afterward, Anatoly defects to the West.

The second act introduces Anatoly’s Russian wife, Svetlana Sergievsky (Heather Orth).  The complicated and underdeveloped subplots involve CIA and KGB agents. The story becomes harder to follow and motivations are even harder to decipher. The play runs the gamut of betrayal, confession, and heartbreak. By the time we hear the last lyrics, right and wrong have lost all meaning–and the possibility of happiness has vanished :

We’ve seen it all

But we go on pretending

Of particular note, the chorus brings energy and clever choreography whenever they take the stage. Beginning with the opening number, “Merano,” the six person chorus sets the tone in matching black and white outfits. Their voices mesh well, their movements are crisp, and they introduce us to the world of chess. Chris Uzelac, as Anatoly, has a soulful, rich voice, well-suited to the duets with Florence. He delivers one of the highest moments in the show with a soul-searching delivery of the memorable patriotic song “Anthem.” Uzelac evokes pathos, passion, and poignancy. Anatoly’s personal struggle parallels the political standoff with far-reaching consequences.

As Svetlana, Orth delivers powerful vocals, gripping your heart in the sorrowful ballad “Someone Else’s Story.” It is a beautiful song, and in her capable hands it becomes a moment to remember.

Although Rice’s characters emerge as mere chess pieces caught in a much bigger struggle, we are captivated by the individuality of their plight. The Cold War that swirls around remains far off and aloof.

Custom Made’s production of “Chess” comes at a fitting time in our lives. “Chess” traverses a dark time in history, demonstrating struggles we may face in a near tomorrow.

It is an ambitious start to Custom Made’s 2016-17 season.  The acting is strong overall, and the highlights are very high indeed.