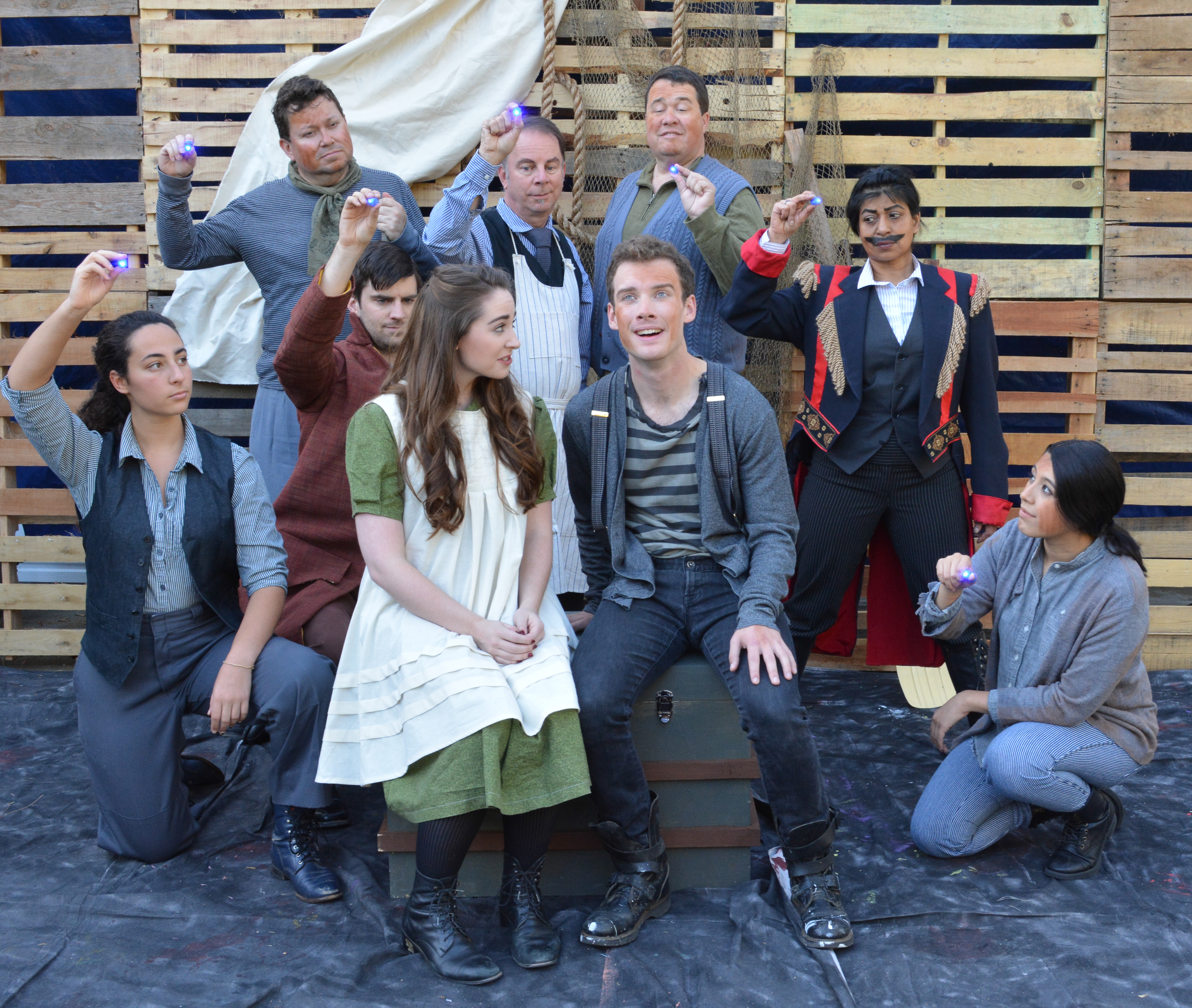 “Peter Pan” tells the story of a mischievous child who refuses to grow up. The tale is full of adventure, sword fights, and the ability to fly beyond the stars. Peter Pan is a free spirit, a romanticized ideal, who appeals to children longing to escape the restrictions of civilization and to adults who wish to recapture their youth.

In Marin Onstage’s wonderful production of “Peter and the Starcatcher,” children and adults alike will be delighted by the story, which is a prequel to Peter Pan. A recent hit on Broadway, “Peter and the Starcatcher” is wildly creative, using only ten actors to play around 100 characters. In our modern world of screens and spectacle, this show utilizes imagination and stagecraft to create a magical world.

Characters transform onstage by adding a costume piece or drawing a mustache. Players are used as walls or doors, and simple props become waves, forests and ships. Director Patrick Nims has put together a whimsical show that perfectly fits the quirky Belrose Theater. Walking in the front door, it feels like you are entering someone’s living room.

The cast is excellent and energetic: they throw themselves into their roles and have as much fun telling the story as we do watching it. Hannah Bloom, who plays Molly Aster, is particularly compelling as the young girl who discovers the orphan boys who stow away on the cargo ship on which she is traveling.  Bloom captures the impetuousness of being a teenager yearning to be an adult, still trapped by her youth. You won’t be able to take your eyes off Sumita Narendran as Black Stache. Of course, playing the villain is always more fun, but Narendran gets to mug, dance, and preen around the stage. You can imagine her evolving into a certain captain with a hook for a hand.

This production succeeds most when it captures the magic of storytelling. Whether you are 11, 41, or 81, you will love putting the pieces together an orphan boy becoming a hero, fighting off pirates, finding love, and learning to fly.

The boy who becomes Peter is an orphan with a well-earned distrust of adults. All he wants to do is be a boy “for a while.” Again and again, adults disappoint and outright abuse him. Molly teaches him the meaning of being a hero: to sacrifice something meaningful to help another person. In order to achieve adulthood, the child must practice self-sacrifice and accept responsibility.

Watching this performance with my 11-year old son, I was struck by the depictions of childhood. The orphans are neglected, abused, and sold into slavery. Molly is tired of being treated as a child and wants to grow up more quickly. My son’s opinion was that the play showed the powerlessness of being a kid, always at the mercy of adults.

In the end, Peter’s wish to remain a child for a while becomes a permanent sentence. We cannot help but wonder why anyone would want to be an eternal child, even if he can fly. Though it is up for debate whether Peter finds his happy ending, we walk away satisfied that our childhood will always be with us. “Peter and the Starcatcher” by Rick Elice, directed by Patrick Nims, by Marin Onstage, at the Belrose Theatre, through Saturday, November 12, 2016. Info: marinonstage.org