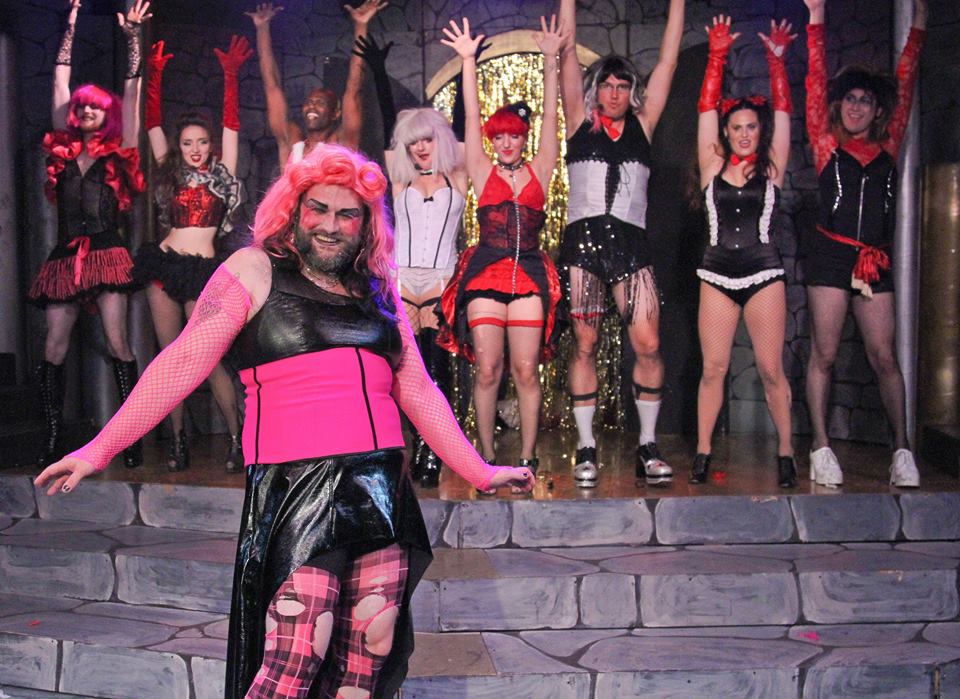 For two hours, Santa Rosa’s 6th Street Playhouse transforms into the most depraved place in the Bay Area—and that’s saying a lot!  In a debauched presentation of Richard O’Brien’s “The Rocky Horror Show,” Director Craig A. Miller encourages the house to unleash their inner-freak. The boisterous Frank N. Furter (Michael RJ Campbell) bewitches with a rainbow-vomit drag-salad that you cannot help but adore.

Never a show for the faint of heart, in this version a cast member instructs the audience to yell: “Asshole!” or “Slut!” each time Brad Majors (Mark Bradbury) and Janet Weiss (Abbey Lee) are mentioned. And the audience delights in the depravity. Prepare for a decades-long fermentation of potent underground chaos that long ago made the 1975 film, “The Rocky Horror Picture Show,” a cult classic. Rocky Horror fanatics hardly require permission to yell at live actors, dance in their seats, and sing along to every tune.

The show begins with the campy “Science Fiction/Double Feature,” sung by Usherette (Amanda Morando), who doubles as Magenta, Frank’s resentful assistant. Lowered on a hula-hoop, Usherette’s sultry vocals relax and welcome us. While Usherette serenades us, she contorts herself upside-down, spreading her legs through an aerial hoop. She reveals her white panties emblazoned with a single star: a warning of in-your-face sexual confrontations to come.

From there the show launches into outer-space at Frank N. Furter’s castle, an out-of-this-world domicile on the planet Transsexual, in the galaxy of Transylvania. Brad and Janet, utter squares, are engaged to be married. During a storm, they get a flat tire and go over to Frank’s castle to use the telephone. They are greeted by Riff Raff (Jake Turner), the undertaker. Vaudevillian nonsense, chaos, and sexual innuendos ensue. The second act is more dynamic, as Frank N. Furter, a pink-wigged transvestite, continually transforms, delighting in each different face. Frank’s seductive and homicidal tendencies fall away as he/she reveals more humility and softness. Tim Curry, who played Frank in the cult classic movie will remember him as an effeminate,   pansexual Lothario. Here, Campbell’s Frank becomes an unsympathetic primadonna who spits poison. While gender-fluid he remains unmistakably, like a Big Gay Bear, and he kills.

The show brings us raunchy delights: sex, drugs, and rock n’ roll. The costumes are tight and short, the set is simple and pleasing; the four-piece band is raw, and the audience is as much a part of this production as the cast.

The 6th Street Playhouse presents a truly faithful production, both lighthearted and welcoming to audiences who expect to be part of the play.  By the end of the night, there isn’t a dry seat in the house.