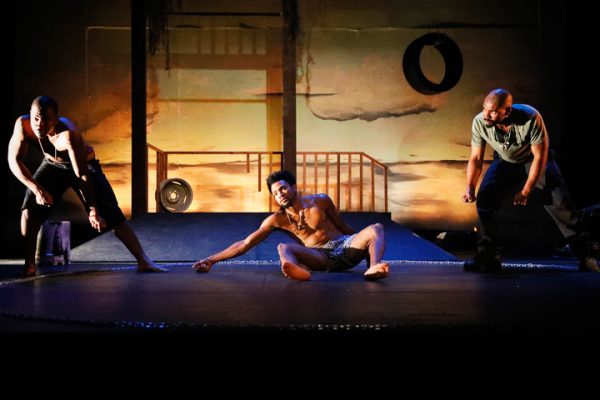 The Theatre Rhinoceros’ production of “The Brothers Size” presents a hot-blooded, choreographed drama, lyrically directed by Darryl V. Jones.  Set deep down in Louisiana’s Bayou country, three men are connected through trial and betrayal. Playwright Tarell Alvin McCraney reveals the story in the “distant present,” connecting Black roots from the U.S. south to the Motherland of Africa.

McCraney tells his story in African folklore style, with the classic “trickster” as hero and child who needs to be taught a lesson. In this case, it is a lesson of freedom and responsibility for one’s choices. But what to do when you cannot attain freedom, what about freedom denied? How is oppression enforced in the most subtle of ways? We watch as Ogun Size and Oshoosi Size confront their angst and their oppression.

The cantankerous older brother, Ogun Size (the smartly disciplined LaKeidrick.S Wimberly) owns a mechanic’s shop, works hard, and is proud of it. But Ogun finds himself, once again burdened with his zealous younger  brother Oshoosi Size (the bright, breezy Gabriel Christian). Fresh out of prison, the naive Oshoosi longs for adventure and pleasure—the exact opposite of his older brother.

No soon does Oshoosi begin to accept his older brother Ogun’s strict rules, but  in slides Oshoosi’s former prison-mate, Elegba (the sultry Julian Green). Elegba reminds his prison-brother of the temptations of the world and flesh. The older brother and the prison lover engage in a subterranean battle for the younger brother’s love. Lust and brotherhood tear Oshoosi between adventure and duty.

Laura Elaine Ellis’ choreography vividly illustrates the physical struggle, holding onto Black culture with fearless movements and Ebonics. The men break down the fourth wall, with their remarks and their verbalized stage directions.

The diverse music selection, also directed by Darryl V. Jones, unveils the story: slave hymns, southern blues, African drums, and even some R&B. Each has its own poetic place inside the large silver link chain circle on the stage, which represents the entrapment of all three characters. They dance their hopes and fears inside that Dream Circle. We witness their inner world, fighting and loving in dream-like movement. As they dance to African drums, we feel their longing, and the slave hymns make us feel their pain.

“The Brothers Size” exhibits Black lives from a secret place. Here in California, we can forget about lives down at the Bayou.

McCraney reminds us that Black oppression in the United States is real, no matter where you are or what news channel you watch. The play reminds us to both fight for our freedom and then use it wisely.

With its African mythological background, this fable-like story can be told over and over again—done as well and as gracefully and sensually as this Rhino version.  Bravo to actors and director. I would sure enough go see the Rhino production of “The Brothers Size,” again.