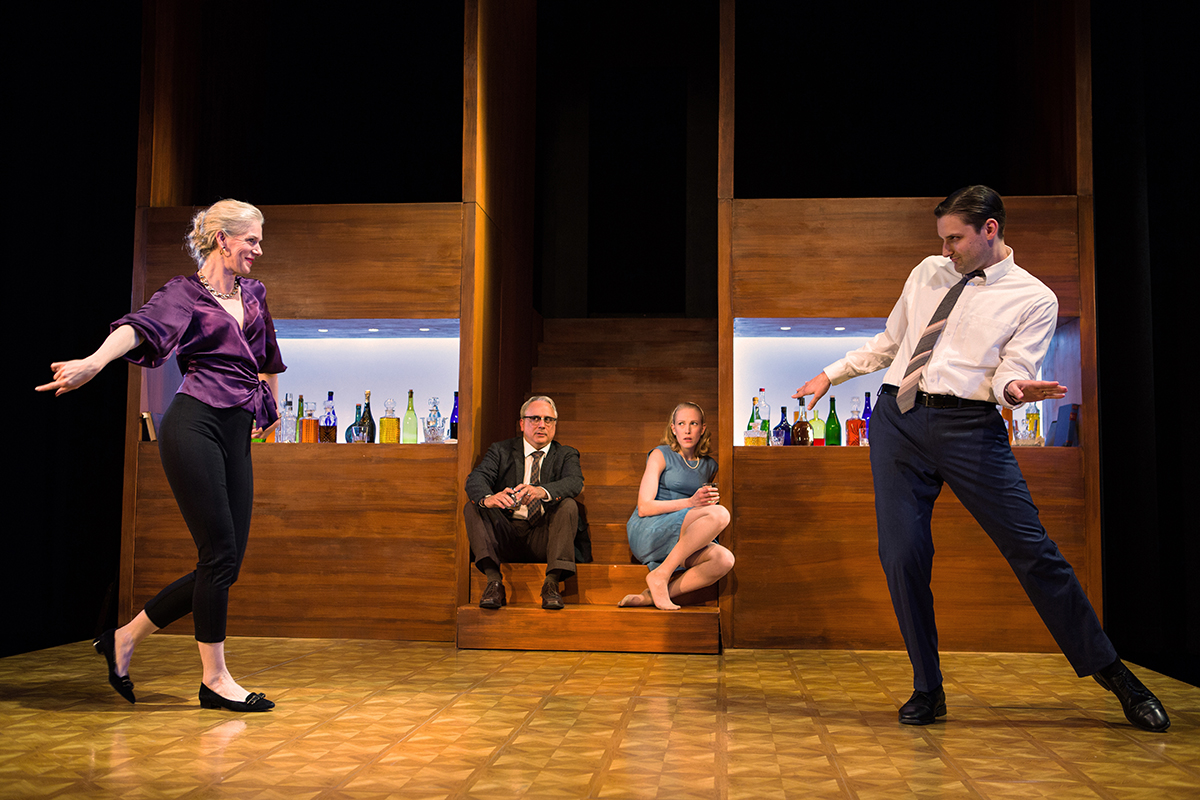 by Svea Vikander and Zu Edward

Zu Edward: Albee’s play breaks on you with a torrent of words.  The words come fast.  They have to.  The play is three hours long.  In the hands of David Sinaiko (George) and Beth Wilmurt (Martha), the pacing, the timing sound right, the punchlines perfect. Their George and Martha, they are two old adepts, geniuses, really, in the game they are playing.  What is this game?  And why are they playing?

Svea Vikander: For fun! I think—

ZE: It’s something cruel, clearly, but at the beginning, while Martha is giving as good as she gets from George, you think that maybe, just maybe, they can take it from each other, that this is some old ritual shared between two soul-mate “phrase-makers,” to use Martha’s word, performed to intrigue and challenge a twenty-year binge of college faculty dinners, presidents and professors, and the wives of professors (it’s 1962 here), the fresh-bodied professor with the fresh ambition, the sex and the 2 a.m. liquor.

ZE: The bottles are arrayed before you, a blue-lit background to all that will transpire.  God spare the outsider who would dare to interfere.  Wouldn’t you say so, dear?

SV: Your delicacy can only be matched by their need to perform. George and Martha need an audience to watch them tear each other apart, even if only their sober selves gazing down from their mid-century modern second floor platform in their mid-century modern apartment. That’s the real uncomfortable truth of the play: we, innocent audience members, stare with mouths agape at their infinitely ingenious methods of torture.  The taste it leaves in our mouths is painful and delicious.

ZE: The taste of a nickel?

SV: It’s a public hanging. The thing is, some of us are looking for the last-minute reprieve, and some of us are not. Unlike you, or Nick (Josh Schell) , or Honey (Megan Trout), I am always happy to interfere.  Do you know, the last time you asked my opinion about anything was about an acid-wash jacket you couldn’t decide to buy?

ZE: I wore that jacket today.  And I do have a soft spot for the diffident. Nick and Honey, will they leave or won’t they? They so obviously don’t want to be there and yet can’t seem to tear themselves away.  Honey at least has the sense to drink herself out of it.

ZE: Josh Schell’s Nick is such a sincere Tom Buchanan of an all-American sportsman, this could very well be his first encounter with irony.  The first time anyone spoke to him without the deference due his pedigree. This is a man who knows a locker room.  What can he do but plunge forward with brute physicality?

SV: Maybe shut up and drink his Negroni? Because let’s face it, conditions are perfect. Nina Ball’s excellent, pared-down stage design works just as well for “WAVW?” as it does for Chris Chen’s “Caught.” There is no couch, table, bed, or chair. Not even a vase of large flowers. The stage is an expanse of parquet flooring interrupted only by a recessed staircase leading to two ledge-balconies above. Beneath them, two bars holding back-lit liquor bottles shining in their niches like miniature madonna statues. Basically, the set is: drinking.

ZE: You never want to see an actor act drunk.  These guys more or less finessed it.  But at its best the physicality of play shows pure Mark Jackson.  Took me back to “The Death of Meyerhold.” Those moments when everything that need be said was said in a high knee step, the twist of a foot, a dart-thrown tulip, the saucy opening of a fresh man-hip.  Josh Schell bounds up the stairs, two at time, hulking and simian, after his stone-drunk wife. Bounds into his hostess’s bed.

SV: The thing I liked most of all in the play—aside from the idea of ice cubes made from tears—is Martha’s fluidity.

ZE:  Remember, we guessed she was a dancer?

SV:  Her quick bends, the twisting, turning, sliding across the stage… I felt my own knees wince. And it’s from Martha we feel the most hatred, envy, and pathos.

ZE: The snake in the grass.

SV: And yet to him, she’s the Nasty Woman.

ZE: Well, wicked, and echoes of His Orangeness, definitely.  All that brilliance, that broken since childhood brilliance, shunted away in the history department of some small, safe, incestuous New England college town, he summons for one last heroic charge to make the people near him feel small.

SV: The real question we need to address is: Where are my drunken faculty parties? Where is my sordid sexual liberation? What happened to the days of louche academic infidelity?

SV: As the wife of a professor, all I get is updates from a faculty listserv.

Zu Edward is a Professor of Physics at a small liberal arts college.
Svea Vikander is a radio producer and career coach. Follow her on twitter.