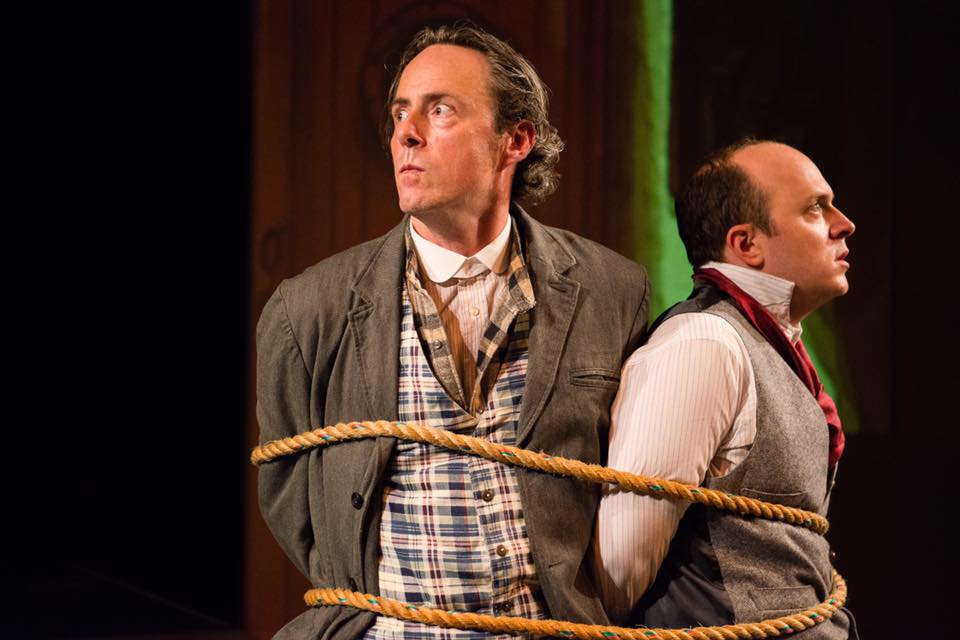 “Baker Street,” the musical at 42nd Street Moon, brings alive the mystery and nostalgia of Sherlock Holmes, still charming audiences. In signature fashion, Sherlock Holmes (Michael Monagle) sleuths his way through even the most mysterious of mysteries with his studious sidekick Dr. John Watson (Dan Seda).  The 1965 music by Marian Grudeff and Raymond Jessel brings this revival of “Baker Street” to life at the Eureka Theatre.

The tall and dashing Holmes looks gentlemanly in his Ulster overcoat and deerstalker cap, speaks smugly during deductions, and strides smoothly into danger. Monagle faithfully reflects the classical Holmes, with a quick and confident voice.

The shorter, pudgier Watson, in contrast to the sharp wit of Holmes, records everything in a notebook and dutifully narrates the action—rather than taking part. Holmes’ brilliance is often underplayed. When Holmes easily escapes the chains that bind him and Watson neutralizes a bomb with Adler’s hat pin, the scene unrolls with perfunctory aplomb.

Though Holmes presents a strong presence,  the alluring Irene Adler  sparkles in the show. Haug sings beautifully and coquettishly in “Letters,” where she reads through her stash of collected love letters, impersonating each lover. One moment she is regal, the next shy, the next groveling—with a Southern accent, all charmingly done.

When she sings,“What a Night This Is Going to Be,” she underscores the excitement of Holmes, Adler and Watson before they head out on their adventures. At the end, Adler sweetly croons, “I’d Do It Again,” satisfying the most sentimental person in the audience.

Minimal physical set transitions are supplemented by fast and effective background changes with a projector. First, we enjoy the Victorian splendor of the Holmes-Watson flat; and then we are transported to a dark alley in London. These visual and audio elements seduce us into following their fluid exploits.

It is a tall order to capture even one adventure of the infamous Sherlock Holmes on stage, and in a musical form. However, “Baker Street” hits all the right notes and presents a new perspective with the singing Sherlock. It is “Precisely!” the right amount of mischief and excitement for a mystery lover’s night out.