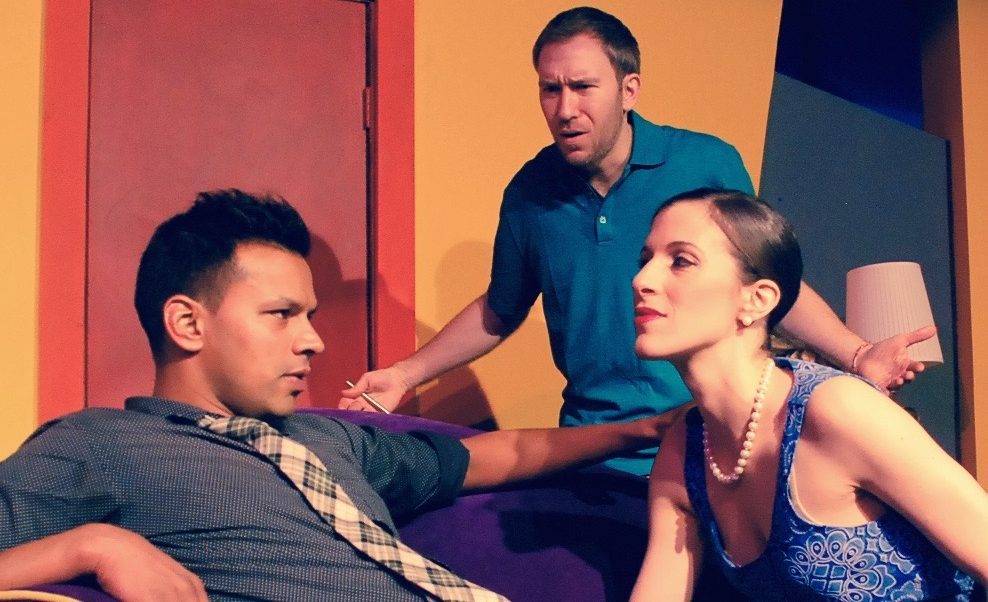 Shelton’s version of “Beyond Therapy” uses ridiculous scenes, exaggerated stereotypes, and hilarious street lingo to reveal the absurdities in those little thoughts and questions that creep into our minds. He modernizes this 1980s script with touches of familiarity–instead of a newspaper ad, Bruce and Prudence meet online. And they argue about “the “best” part of the Bay Area to live in.

The funky, colorful set reflects the brightness of each character’s personality and the vibrant dialogue. Bold furniture pieces like the flowing purple, oversized chaise lounge work for therapy sessions, as a living room sofa, and a restaurant bench. Even the music breaks out the boogie, at tunes overwhelming the dialogue.

The wittily named heroine, Prudence (the outspoken Melissa del Sol), lives with her two cats, harnessing high expectations for her perfect future husband. She has been seeing, and having an affiar with her obnoxious, cowboy-costumed, premature ejaculating therapist, Dr. Framingham (the gruff Josh Klein).

Along comes Bruce (the fast-paced Tim Gahan) through a dating ad, who is emotionally unstable, as well as a self-defined bi-sexual. He is working on expressing his emotions with his own dubiously-accredited therapist, Mrs. Wallace (the uproarious Jennifer Proctor), who frequently goes off on her own tirades during Bruce’s therapy sessions. Bruce’s responses to Mrs. Wallace delight us as much as her wonderful, absurd antics. However, Bruce lives with his boyfriend, Bob (the outlandish Jason Kyle)–but he never mentions Bob during his therapy sessions.

When Bruce vies for Prudence’s hand in marriage, he finds himself pitted against Prudence’s jealous lover, Dr. Framingham, while attempting to sneakily maneuver around his own partner, Bob.  In the midst of a confrontational scene where a fake gun is pointed and shot repeatedly, Mrs. Wallace emerges from her terror to delightedly exclaim that all of them are “making progress” by unleashing their emotional furies. They all publicly run amuck in a restaurant, terrifying the fabulous gay waiter (the endearing Jared Pati).

Director Shelton does a phenomenal job casting and costuming each character. Prudence, Bruce, and Bob are all young, fresh, sexy, and contemporary. Prudence shows her legs in a classy, fitted blue dress; while Bruce looks dapper in a buttoned down shirt and slacks.  Bob commands attention when he stomps into the living room in just his boxer briefs! Despite the chaos of their personal lives, these characters seem quite pleasant and attractive—we wouldn’t be surprised to see them at a Happy Hour before the show. In contrast, the older and imposing therapists, Dr. Framingham and Mrs. Wallace, show us what damage years of “therapy” can do. Dr. Framingham dresses and acts like a wannabe playboy, in too-tight jeans, an oversized belt buckle, and frazzled locks of hair. Mrs. Wallace wears a kimono-like ensemble, with red shoes and a blank stare when she cannot recall a word—which happens a lot.

Bob confides in Mrs. Wallace after discovering Bruce and Prudence together. “But he doesn’t have a lisp!” Mrs. Wallace cries, deciphering for the first time that Bob is Bruce’s lover. Mrs. Wallace screams, “Cocksucker!” at Bob. Her uncontrollable exclamations lead to a quick plunge in her blood sugar, which she remedies by grabbing a large chocolate chip cookie from her enormous straw purse. The butterfly clip in her hair bobs up and down as she quivers between cookie and obscenities. The therapists have come undone.

Durang draws own his own experiences as a gay man using therapy to battle depression while in college, to candidly display the hidden prejudices of psychology at that time.  While we laugh at the outlandish treatments on stage, we must acknowledge the reality of homophobia in 1981, at the height of the AIDS crisis. “Beyond Therapy” captures the essence of dating and therapy and sexual fears that still ring true.

A perfect show for Millennials, new and returning Durang fans, or a hopeful date night, “Beyond Therapy” screams everything that you have been thinking but are afraid to say out loud. Rather than watching another rerun of Saturday Night Live, come to the Shelton Theater and get a lively dose of humor therapy.  The cast is delightful to watch, individually and in response to each other. “Beyond Therapy” delivers a satirical punch that will titillate all your funny bones.