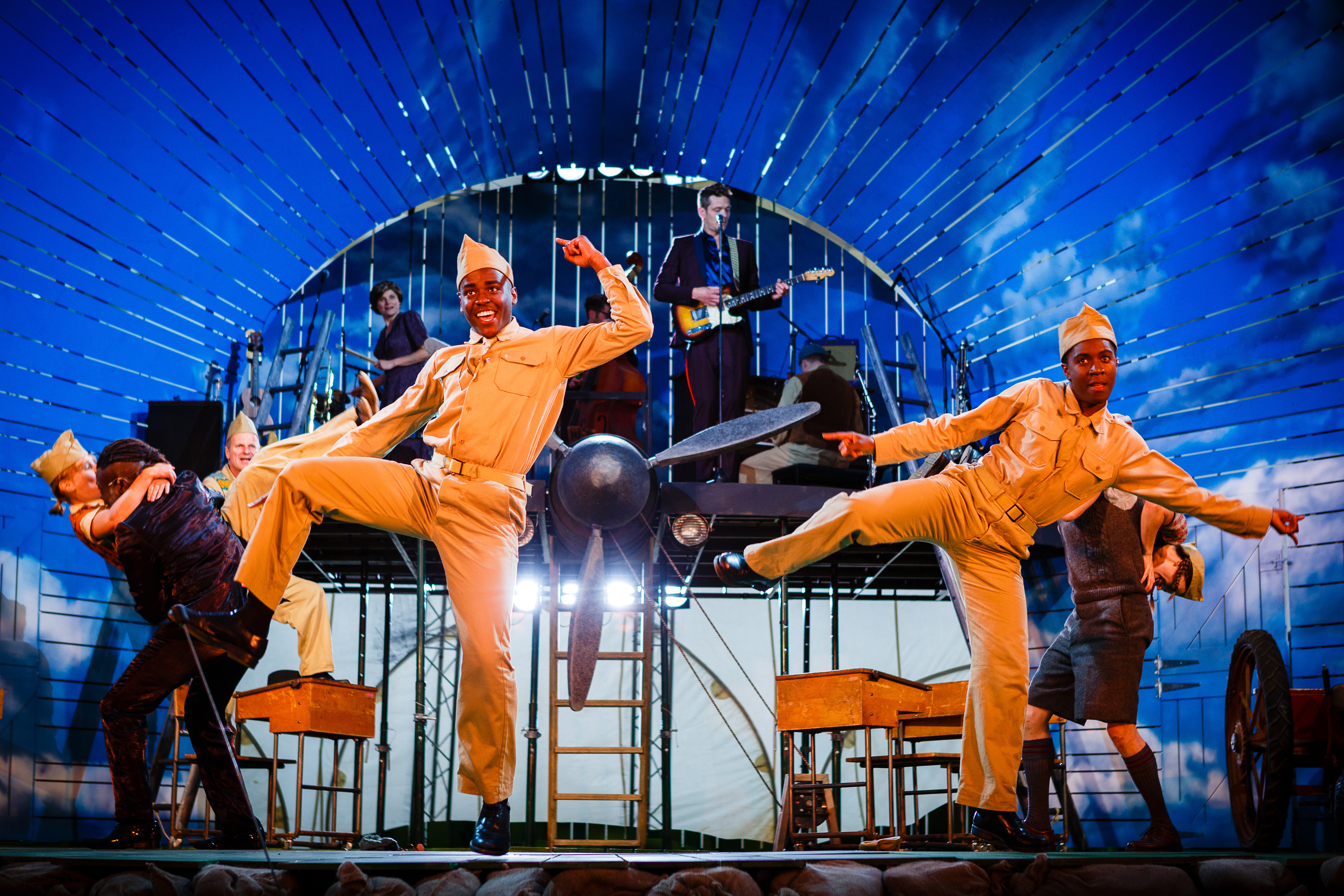 How about a D-Day landing story from a little village, called Slapton, on the south coast of England, where thousands of U.S. troops turn up and mingle with the local Britishers? And in 1944, these rural farmers have never before seen any American, let alone African American soldiers in uniform. “946: The Amazing Story of Adolphus Tips” harks back to a tragic, little-known World War II story.

Now, Kneehigh Theater of Cornwall and Birmingham Rep have brought the story full circle to Berkeley Repertory Theatre. The magic and the revelations come from a children’s story by Michael Morpurgo, aided by the theatrical genius of Director Emma Rice, in another of their unique collaborations.

Without giving away the mystery of the number “946,” it’s about the deadly serious American and British military preparations for the D-Day landings. In 1944, the Allies rehearsed their invasion of France just off the British coast. They massed thousands of ship and troops, leading to a tragic mishap.

The central character in this historical circus is the feisty twelve year old British girl, Lily Tregenza, played by the endearing and witty Katy Owen. It’s a feast for the eyes, the ears, and for ideas about trans-Atlantic congeniality. Mr. Tips gets lost when the villagers have to be evacuated and become migrants in their own country. The story shows simple people accepting exotic strangers from abroad, and loving them.

Kneehigh Director Emma Rice conjures the recipe for an old-time British vaudeville show, perfect for the whole family, plus lots of jazz, dancing, singing, and hi-jinks by a large cast of Brits and Americans. The highlights come from two African American soldiers: Adi, a noble and sympathetic Ncuti Gatwa, and his buddy, Harry, a lithe and warm-hearted Nandi Bhebhe.  The two soldiers, so caring and compassionate toward Lilly and her cat, Adolphus Tips, really run away with the show. Both Gatwa and Bhebhe are multi-talented story-tellers, dancers, actors, and puppeteers. Like all of this cast, they do it all and transmit emotion every moment.

The fast-paced and sparkling company plays everything from villagers to soldiers, evacuees to sheep and chickens. You will find your favorites on your own. Be sure to note the versatile and limber Ewan Wardrop as Lord-Something-or-Other. And enjoy his wonderful transformation into a sexy Mrs. Turner. Don’t miss Mike Shepherd as Grandma on a motorcycle, either! There’s lots of time, age, space, and gender travel to relish.

It’s a cross-generational story with romance, drag, dance, tunes of all sorts, mind-boggling journeys through time and space, and big tubs of water and exploding ships for the D-Day invasion disasters. Kneehigh and Birmingham Rep, directed by famed innovator Rice, have transformed yet another Michael Morpurgo children’s story (War Horse) into a totally new wild style.

“946: The Amazing story of Adolphus Tips” pulls all the historical strings between the US and UK during WWII, and recreates a little known story of friendship, disaster, and childhood understandings—from the point of view of a little girl whose father is away fighting in France. There’s even a French-Jewish schoolteacher Mme. Bunine, played by the delightful Emma Darlow.

So many brilliant actors and themes, so many varieties of people, soldiers, songs, and brilliant stagings, where puppets suddenly come to life, and a little girl’s crush on a boy gets confused, and a Grandma who runs off with …. well, you better see for yourself.

Sure, there’s a lot of  music and song, and maybe it pulls at your heartstrings. Maybe it goes on a bit long, but those puppets are utterly amazing and those dances incredible, too. “946” with its mysterious and moving title plays like a dream in your mind–based on truth. It’s a show with life and music for everyone in the family.

All in all, it hits a sweet spot that has made Kneehigh Theater a one of a kind adventure, a feel-good, down to earth, circus of the heart.

“946:  The Amazing Story of Adolphus Tips” based on the novel by Michael Morpurgo,  adapted with Emma Rice. Directed by Emma Rice, in association with Kneehigh and Birmingham Repertory Theatre. At Berkeley Repertory Theatre through January 15, 2017. Info: berkeleyrep.org.