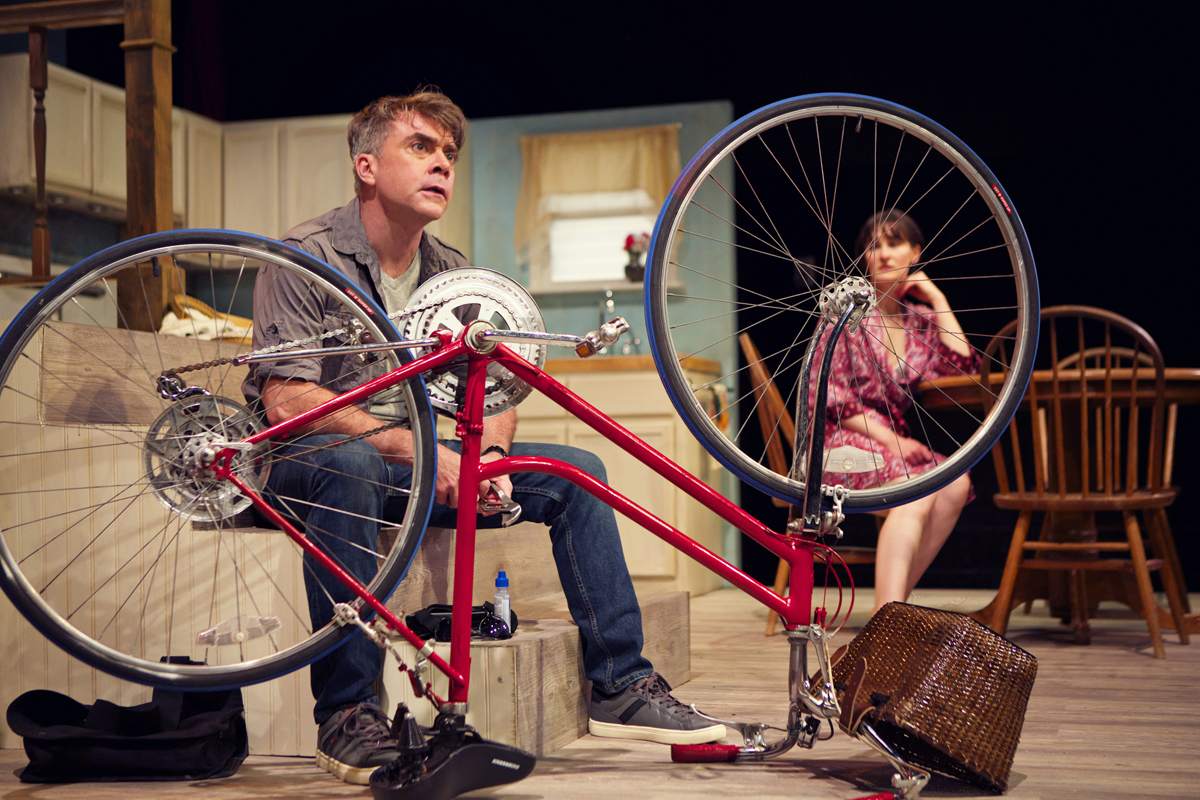 What Is A Woman to Do?

“The Village Bike,” the provocative and insightful play by Penelope Skinner, performed at Shotgun Players, Berkeley, hosts five characters who manage to spin intersecting tales of loneliness, identity, transference, and the utter emptiness that we can inhabit as humans.

Misogyny is just one of many issues Skinner boldly explores in “The Village Bike.” In spite of the seriousness of the subject, she weaves magic onstage with wonderful comedic tensions. The  tensions are as heart-wrenching as they are funny. Eliza Stebbins powerfully plays Becky, a pregnant but lonely and loveless wife. Her Becky deals with new sexual desires, whilst taking us on a tour of an isolated English woman’s conflicting roles as a wife, expectant mother, and sexual being.

Since Skinner’s play centers around the bike as a central object, as a Brit, I was drawn immediately to recall the colloquialism we use in the U.K. for a woman who is sexually active. In Britain, a sexual woman is often seen as a threat to the social order.  Brits use the terms ‘bike’ (that which can be ridden) and ‘whore’ interchangeably, displaying their hostility towards women’s autonomy and volition.

At night, a yearning Becky strives, repeatedly, to arouse her husband John’s desires. John is clueless, as played by Nick Medina. All the while, Becky is having sexual fantasies she wishes to explore. In the audience, we can feel her acute tension: it’s palpable. Stebbins and Medina make it easy for us to experience how her desire for carnal connection is driving her decisions and behavior.

Becky is riding that bike wildly out of control. She is pushed to seek connection in two unexpected places, both of which will amuse and fascinate you. How can she cross the invisible social line between herself and the promiscuous bike seller, Oliver (a lusty Kevin Clarke)? Does she dare take advantage of Mike (a bumbling, lovable David Sinaiko), the socially unacceptable plumber? Skinner’s play is riddled with class angst, as well as sexual suffering.

After the performance, we had the opportunity to ‘Talkback’ with Director Patrick Dooley, and the actors. In the discussion, I learned that playwright Skinner is herself appalled by ongoing cultural misogyny, the double standards applied to women. Skinner is responding to attacks on women’s freedom to be sexually active and self-determining. She is fighting the present-day oppression of women in our world.

As humans, we all embody an incredible marriage of the pedestrian and the sublime. Skinner’s “Village Bike” wins the race in my book! I look forward to seeing more of her plays. Thanks Shotgun Players, for a fantastic ride!

“The Village Bike” by Penelope Skinner, directed by Patrick Dooley, is playing at Shotgun Players, Berkeley, on Thurs., January 19, 2017, at 7:00 PM: the Final Performance. Info: shotgunplayers.org

Shotgun Players is now performing “The Village Bike” and four other plays, in rotation. For their dates, see: repcalendar

The Shotgun plays include: “Who’s Afraid of Virginia Wolf?” by Edward Albee, “Grand Concourse” by Heidi Schreck, “Caught” by Christopher Chen, “The Village Bike” by Penelope Skinner, and “Hamlet” by William Shakespeare, running in repertory through January 22, 2017.