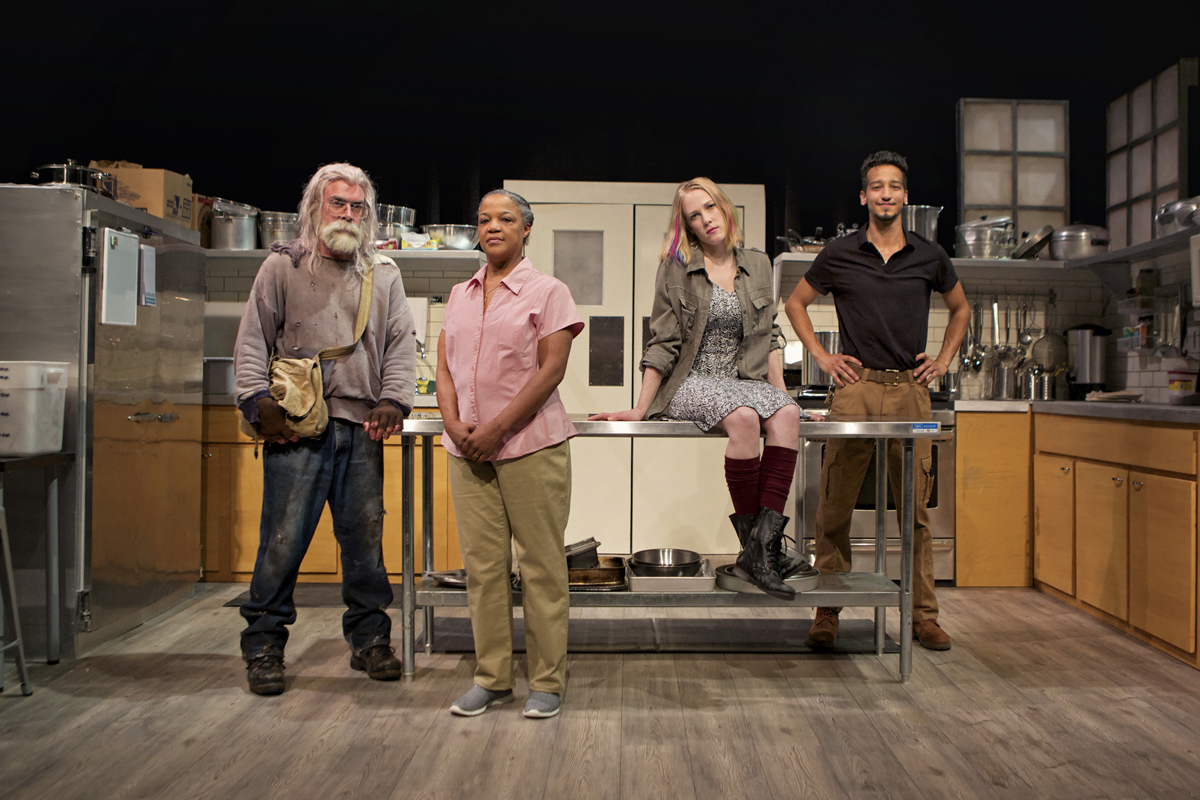 So this 19-year-old girl walks into a soup kitchen. Emma (a secretive Megan Trout) has been kicked out of college (she never went to class) and is back home, in the Bronx, living with her mother, trying to get her shit together. At the soup kitchen she meets Shelley (the formidable Cathleen Riddley), a nun who’s been running the charity for 20 years.

Oscar (the inspiring Caleb Cabrera), a young Dominican, works hard at low wages to keep Shelley going. They both work hard to feed and nurture people from the street, like Frog (a bouncy Kevin Clarke). Frog, a white-bearded, nervous 60s street guy, represents those in need.

Playwright Heidi Schreck has poised Emma, Shelley, Oscar, and Frog at a crossroads, each caught in a struggle. Because Shelley is losing her faith, she sets the timer on the microwave each morning to force herself to pray until the buzzer goes off. You might call her an out-of-the-habit nun—which she is. She wears street clothes instead of the traditional nun’s habit. Oscar, is in love with his Dominican fiancée Lydia, but not ready to marry her. He makes no attempt to hide his immediate attraction to the newly arrived Emma.

Emma wants to volunteer to help “the people who need help—and also me.” She quickly confesses to suffering from depression and low self-esteem. Oscar sees something off-kilter about her. At the start, she needs instruction in chopping veggies, but catches on quickly, spicing up the scene. Emma quickly figures out how to be helpful. When she helps Frog get an apartment and a job, he gets on the road to cleaning up his act. Emma could be a wonder worker…..maybe….

It’s fitting that all of the action of the play takes place in the soup kitchen’s kitchen. What is a kitchen, after all, if not a place of behind-the-scenes preparation and improvisation? For this low-budget church operation, the elaborate, working stage kitchen by Nina Ball turns into a place of making do and getting by—much like the four characters who are trying to find their way. Shelley, the nun; Emma the privileged college drop-out; Oscar, the sensitive worker; and Frog, the crazed street guy—all are trying to be more fully themselves. Sometimes they hit the mark, and sometimes they don’t.

For a short time, the four characters from four separate social classes work together harmoniously, an improvised family. Although they seem to gain confidence, a cloud hangs over them. Expecting a Hollywood ending? You won’t get that here. Strange deceptions, amorous eruptions, and awful betrayals tear them apart.

So, who is doing good here among the clashing classes and privileges? What it means to be crazy, and how much can Shelley forgive? Does she stand for charity, individuality, or forgiveness?

Chaos ensues when Emma, the play’s wild card, stirs up trouble and is exposed. Shelley’s faith in the girl gets severely tested. Because of Emma, Oscar gets in serious trouble with his fiancée. Because of Emma, Frog stops taking his meds and loses his chance to get off the street.  The playwright shows us Shelley, the boss of the kitchen, making crucial decisions that divert this grand concourse of ideas. The soup finally boils over.

The Shotgun plays include “Who’s Afraid of Virginia Wolf?” by Edward Albee, “Grand Concourse” by Heidi Schreck, “Caught” by Christopher Chen, “The Village Bike” by Penelope Skinner, and “Hamlet” by William Shakespeare, in repertory through January 22, 2017.