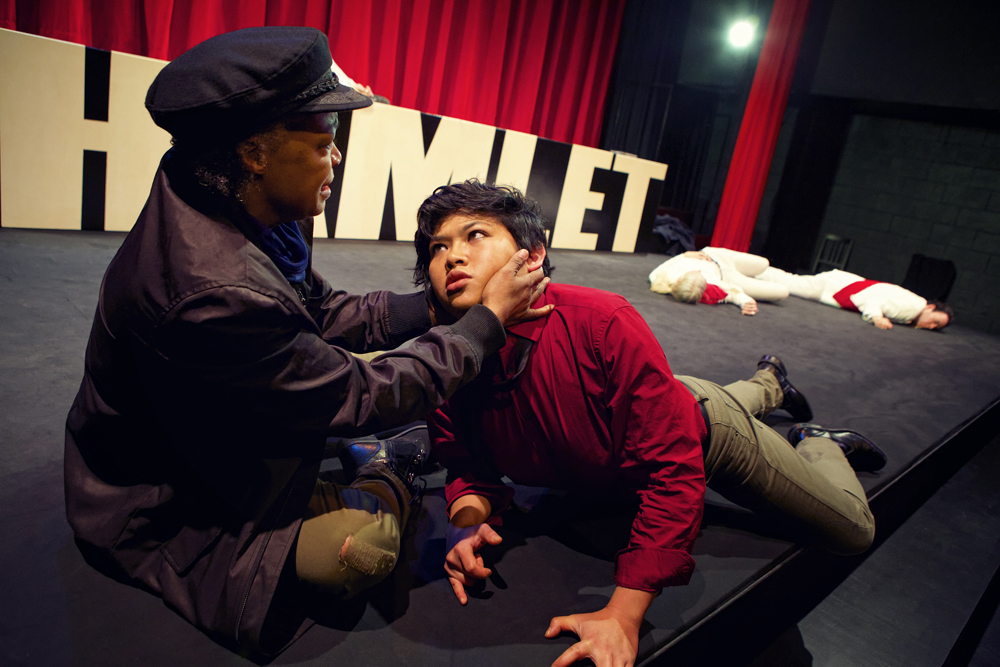 Mark Jackson Puts the Ham Back into Hamlet

Who to be or not who to be? That’s the nightly question in Shotgun’s comic spin on Hamlet

Who knew Hamlet was a comedy? In the current Shotgun Players production, Director Mark Jackson has mined Hamlet for its comic potential, and the cast of seven delivers. There’s a lot that’s remarkable about Shotgun’s clean, spare, well-paced production of the Bard’s most famous tragedy—running a swift two hours.  In this version, all the cast members have learned all of the roles. They come to the theater not knowing which role they’ll be playing that night. Seven actors, seven roles—up for grabs at each and every performance!  Russian Roulette, Shakespeare Style.

Part of the drama is discovering who will be playing whom. Audience members pull names of cast members from a hat, determining the role assignments, with Hamlet saved for last. Sound like a party trick? There’s a party atmosphere to this production, or what may be more aptly termed an off-to-the-races quality. In fact, after discovering their roles, the cast members gleefully race off-stage to don their costumes.

In case you haven’t guessed, there’s nothing stuffy about this production. Director Jackson takes this classic off its pedestal and livens it up. To that end, the show is well served by Nina Ball’s spare, stark set and Christine Crook’s simple, dashing costumes.  At all times, the actors carry black books with the name of their roles printed on the covers in white letters. Other props, like swords and shovels, are mimed. The bare stage features HAMLET written in huge, white, capital letters, and a red curtain forms an inner stage, which conceals or frames a raised, rear platform. Looks like a TV game show set.

The set design adds to the production’s lively, fresh feel. A large electronic APPLAUSE sign, at the top of the proscenium, lights up at key moments, and the audience happily complies. Three chairs on the floor on both sides of the stage (but not on it) sometimes make their way onstage. Actors use the chairs to patiently supply a “line,” when an actor shouts out “Line!” Matt Stines’ sound design adds snap, crackle, and pop to the production; he uses the sound of snare drums to marvelous effect to punctuate jokes. And sound effects serve to amplify the suspense of the best sword-fight-without-swords you’ll ever see. This is theater commenting on itself.

One might wonder if, in being jacks-of-all-trades—learning all the roles—the actors are masters of none. I’ve seen this production twice, and each of the seven actors delivers a worthy performance. Beth Wilmurt, in the show I saw about a month ago, made  an earnest, thoughtful Hamlet. In this week’s show, Kevin Clarke’s comic timing made his Hamlet wildly entertaining, while a bit speedy in the soliloquies. The comedy is great, but the speed sometimes blunted the force and impact of the delivery.

As luck would have it, the roles of Gertrude and Ophelia were performed by the same actors on both nights I attended, and done so with panache by Nick Medina and Megan Trout, respectively. Ms. Trout’s Ophelia is sincere and charming, but Ophelia’s mad scene was somewhat less than mad. That may be the director’s intention, because this mad Ophelia sings, dances, and delivers her lines like a standup comic.  While entertaining, Ophelia lacks the necessary pathos.

The play-within-a-play is done as a dumb show, in the style of a silent movie, and Megan Trout’s pantomime is wonderfully over the top. El Beh takes the production’s rapid pace up a notch in her performance of Polonius, to hilarious effect. Understudy Caleb Cabrera’s Laertes (he played the role both evenings) is full of passion and feeling.

Shotgun’s Hamlet takes all kinds of risks, and the gamble pays off. I’m willing to bet it’s the funniest Hamlet you’ll ever see, and one of the most riveting. The actors most likely come to the theater hedging their bets about who’ll they’ll be that night. Don’t hedge yours: See this Hamlet before it’s put to pasture. Only four more performances of a startling, modern Hamlet to go. The Shotgun plays include “Who’s Afraid of Virginia Wolf?” by Edward Albee, “Grand Concourse” by Heidi Schreck, “Caught” by Christopher Chen, “The Village Bike” by Penelope Skinner, and “Hamlet” by William Shakespeare, through January 22, 2017.