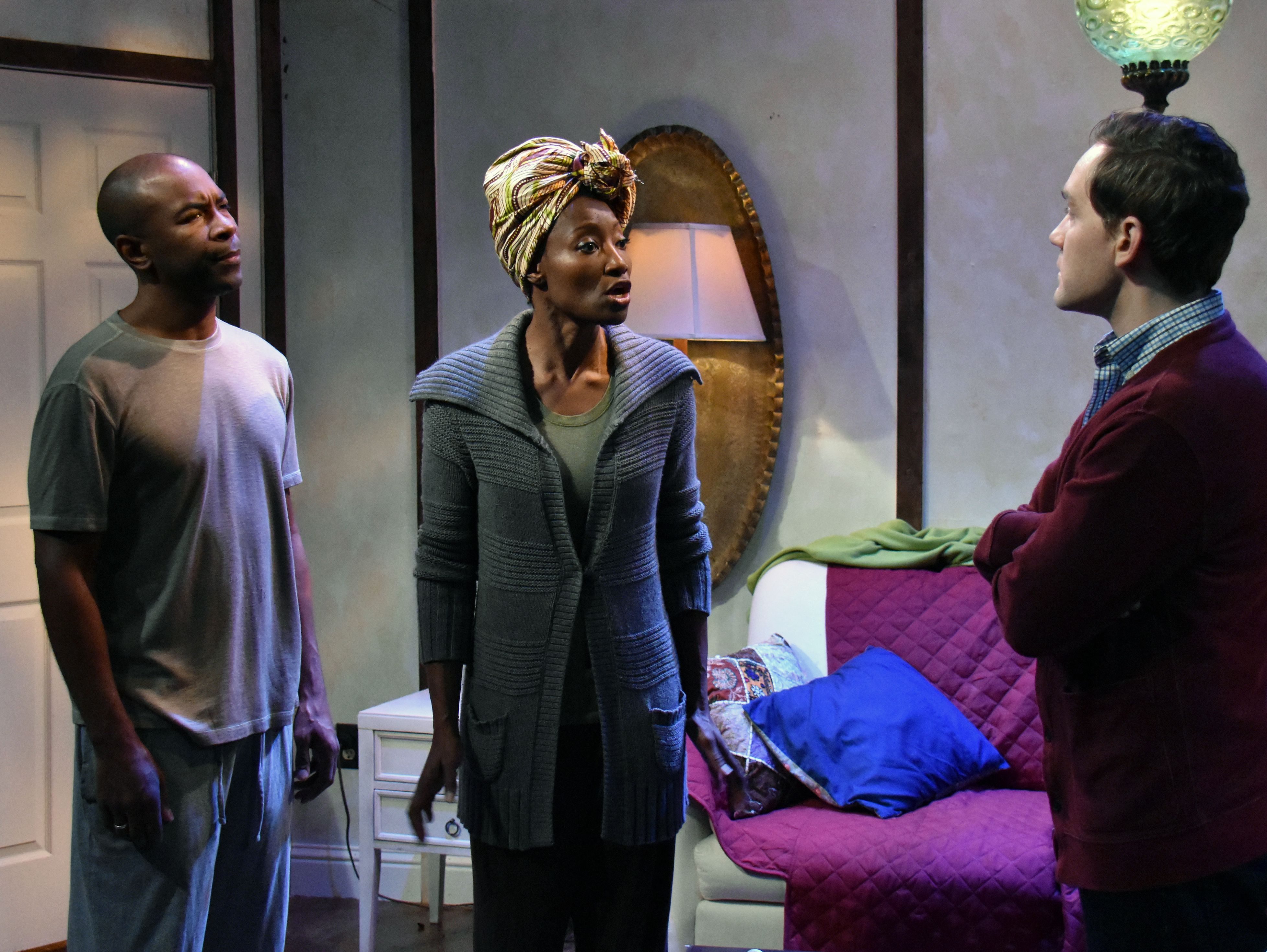 “Belleville” by Amy Herzog, at Custom Made Theatre Co., provides a moving and unnerving 90 minutes of suspense. Smarter than the typical psychological thriller, spiced with an undercurrent of politics, the escalating tension causes enough unease that we end up squirming in our seats.

Herzog wrote “Belleville” first in 08-09, when the Madoff stock scam scandal was breaking and the housing bubble collapsing. The era of “deception we want to believe in” was blowing up, providing an apt birthright for the events here.

In a Paris apartment in Belleville—a multi-cultural neighborhood with Chinese, African, and Arab immigrants from France’s imperialist past—two Gen-Y expatriate Americans, Abby (an anxious Alisha Ehrlich) and Zack (a rakish Justin Gillman) have found a place to land. Their landlords, the play’s two other characters, Alioune (a forthright Nick Sweeney) and Amina (an elegant Nkechi Emeruwak), of Senegalese descent, have become friendly to the young and naïve couple. Well, at least Alioune and Zack smoke weed together.

Abby and Zack’s Belleville apartment has many doors and expressionist angles, as befits all their secrets. Sound Designer Ryan Lee Short does an impressive job, bringing us sudden off-stage sirens, traffic, and babies’ crying—all contributing to building the tension.

The contrast between the ex-pats and their landlords comes from first world versus colonial world differences. Alioune and Amina, the Senegalese couple, are raising babies; they act like grown-ups. Abby and Zack, the Americans, wallow in meds and fears. We are fascinated to slowly discover the unfolding distinctions between the two couples. Herzog unveils the contrasts between the African and the American ways dealing with life in Paris—even when it hurts to watch.

We are drawn to the young expats when we witness the tenderness they show each other. Abby is bouncy and naïve—still showing off their wedding album. Zack, a pediatric AIDS researcher, also young and charming, secretly comes home early from work, but is discovered by Abby. Lamentably, we find out that they are self-absorbed and reckless. Ehrlich and Gillman work magic so that we get deeply invested in Abby’s and Zack’s dysfunctions, while still hoping for their delivery from an imminent, undefined menace.

Slowly we grasp the fact that Abby and Zack have deep problems, and our alarm grows. They frequently ask each other: “Are you okay?” We get confused about who is the more troubled and what lurks ahead. Minor events—the possession of a cell phone, the slicing of a baguette—set the stage for more threatening events. In “Belleville,” a phone call or a door opening becomes ominous. What we thought we knew now seems tenuous.

Alioune and Amina, practical and hard-working, are building their life. They assume no entitlement as they construct their future. They are capable and straightforward where Abby and Zack are aimless and casual. Abby asks Alioune, “When you were little, did your parents constantly tell you: “It doesn’t matter what you do when you grow up as long as you’re happy?” Alioune is at a loss for words. Nick Sweeney plays the Senegalese apt. manager with elegance and delicacy. Herzog never hits us on the head with today’s ugly economics, but Alioune makes her point. By class, race, and nationality, some are born to privilege. Others are required to work.

Nkechi Emeruwak as Amina expresses whole worlds about her tenants with a grimace or a glare. She will not be taken lightly. Sweeney’s Alioune always maintains his dignity, we feel his struggle between duty and heart. Alioune’s humanity offers us a moral compass as events unfold.

Custom Made says they are “producing plays that awaken our social conscience” and they surely succeed with “Belleville,” first produced in 2011, which is both mystery thriller and global commentary. An adroitly conceived play, suspenseful and quietly political, Herzog’s “Belleville” offers a sharp and insightful trip to the part of Paris where the Bataclan nightclub attack took place.

The play has a short, poignant final scene in French, featuring only Alioune and Amina. But we don’t need to know French to understand their simple, brief conversation. Alioune and Amina’s faces, tone, and their work tell us what we need to know. Alioune is heartbroken. Amina notes that it is not the end of their world. They have things to do.