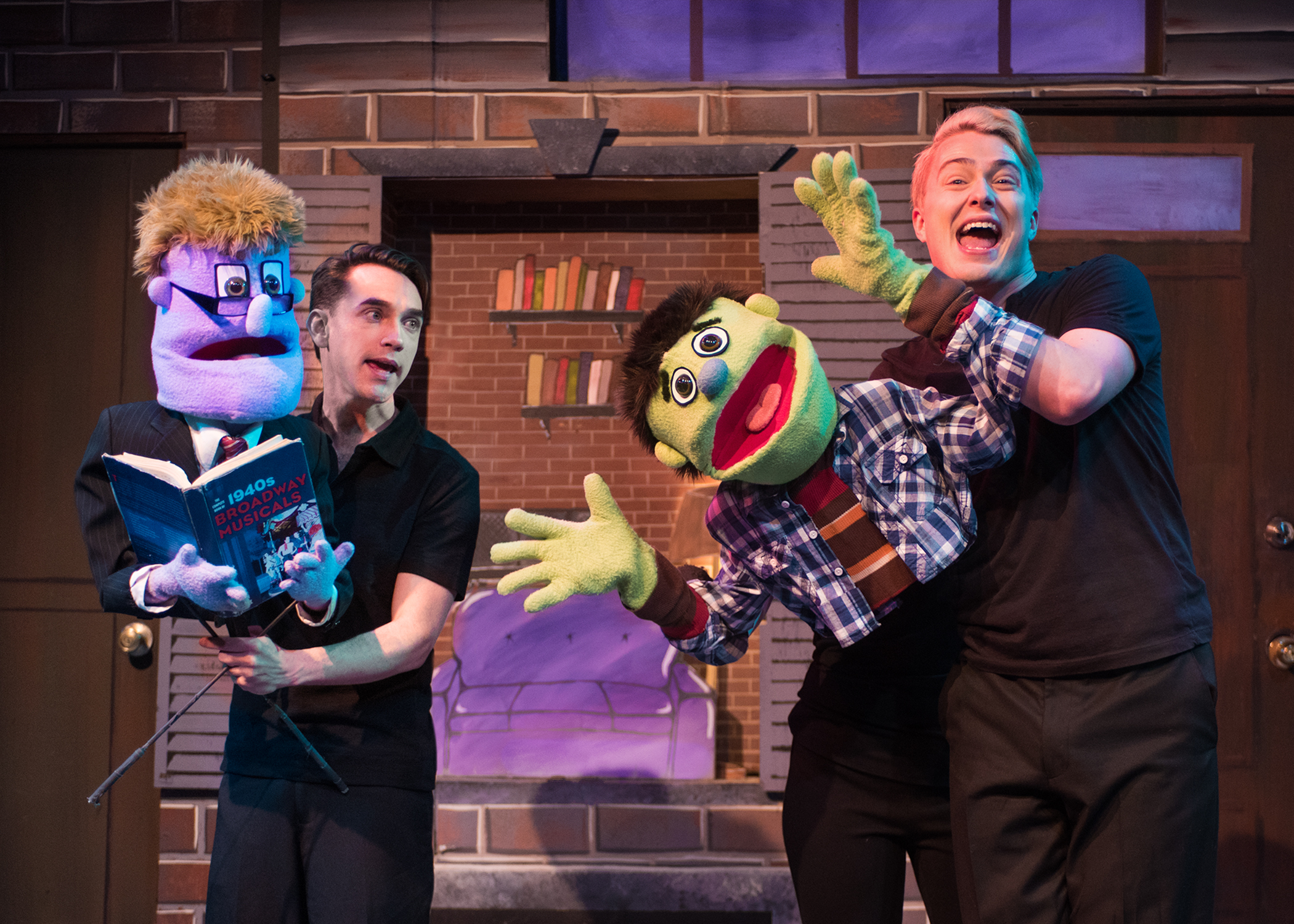 This is a show that audiences want to see over and over again. Since its beginning in 2003, “Avenue Q” has played to millions of people all over the globe. The show has been revived over and over again, still running in New York and for the fourth year, it’s running at New Conservatory Theatre Center in San Francisco. “Avenue Q” is fast becoming a Christmas and New Year’s tradition, here, as well.

“Avenue Q” is a street down on the Lower East Side in New York City—a mythical street, that looks like a set from Sesame Street, designed in a child-like manner by the spirited set designer Kuo-Hao Lo, who makes it look like a row of houses in a children’s book. The street is full of young folks coming to New York and trying to make a go of it, down in Alphabet City, although the streets there only go to Avenue C or D, so far as I know… Q must be a place where the rents stay low…it’s a queer kind of block….

These young folks are facing all the worst that The Big Apple has to throw at them—lack of jobs, high rents, fussy roommates, making new friends, sexual threats, prejudices, and gender choices….lots of things that young working Americans face every day.

In “the Purple Cast,” Kyle Stoner, a standout singer and puppeteer, plays Rod, complete with large puppet characters for each role, switching effortlessly between them. He is the object of the funny song, “If You Were Gay,” playing a young guy who is confused about his sexual orientation. He just cannot admit to being gay—he doesn’t even consider it possible. These songs strike home with any generation of young people who are coming out, or thinking about it, but afraid.

Rod and his sweet roommate, Nicky (a sprightly and tuneful Brendan North) owe a lot to Ernie and Bert on Sesame Street. Their puppet personas are the brightly colored furry puppets they wear on their arms—still a witty innovation. Stoner makes his gender-questioning Rod a touching character; while North fruitlessly tries to help him out. They work together, beautifully—a couple uncoupled.

North also makes a charming Trekki—a green bunch of fur—a new version of Cookie Monster. And there’s a lot of delight in seeing the furry monsters trying to fit into the human and puppet world that develops down on Avenue Q—where the rents are still cheap, and young folk can try and make a go of it.  At least they could when Avenue Q started out. Most young folks have had to move over to Brooklyn, Queens, the Bronx, and beyond, now. Gentrification continues—where is Avenue Q, these days?

Yet here they are, still charmingly singing and dancing and searching for sexual and intimate adventures—in songs that include “What Do You Do with a BA in English?” and “It Sucks to Be Me,” and “Everyone’s a Little Bit Racist.” Those songs from our past—deluged by Business Majors, MBA’s, and more to come sound lovely and nostalgic in the mouths of the Purple Cast—and I’m sure the Orange cast does likewise—I want to see the Orange Cast, too—they are all irresistible!

There’s even sex for puppets, a torch singer, and good and bad angels. Stoner plays Princeton, too, an uptight job-seeker, and Baker plays Lucy, the sexually liberated older woman.

And don’t forget Venessa Vaccianna who nails the role of Gary Coleman—the former child star who manages these buildings. She dances and sings with abandon and cheer, reminding us what it means to be a child forever.

And Monico Ho plays Christmas Eve, a young Asian immigrant who is as funny about herself as anyone can be—you must see and meet her. There are plenty of magical people and puppets here to make me go back and see it again. Avenue Q is Great, Again!

All these truths, in children’s songs, warmly embraced by a talented cast—makes the time fly by—on this lewd and naughty adult Sesame Street named “Avenue Q.” Why didn’t anyone tell me about this before?