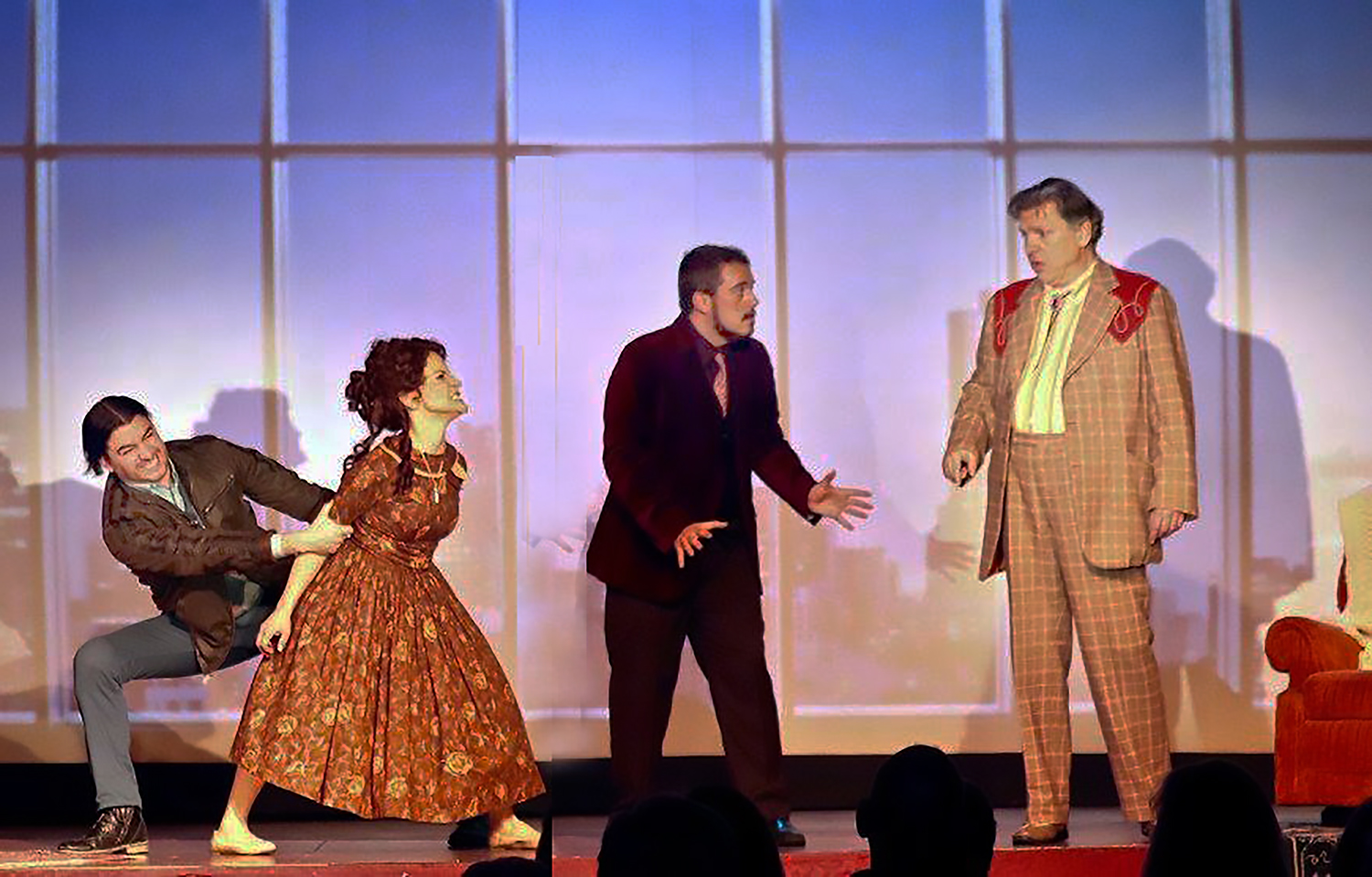 What makes a complete life?  This age old dilemma is the central question of this little gem of a production of Donizetti’s comic opera “Don Pasquale” at the Island City Opera.

Set in a modern San Francisco, the inspired set design by Scott Barringer overcomes the limitations of the small space and invites the audience to indulge themselves in a modern take on this classic Italian masterpiece.  We first encounter 70 year old Don Pasquale (Bojan Knezevic) asleep in his easy chair in his penthouse apartment with a spectacular floor to ceiling view of the San Francisco skyline in the background.

Bass-baritone Knezevic excels in both his singing and acting as the foolish Don Pasquale, who fancies himself still a virile and desirable catch for a young wife. Knezevic, a former Merola and Adler Fellow, a member of the San Francisco Opera Chorus, is well known to Bay Area opera buffs.  Knezevic returns to the role he sang in the Walnut Creek Festival Opera, bringing passion and conviction to the role.

In Act One, Don Pasquale is awakened by a uniformed maid and butler, as he welcomes the visit of his personal physician, the conniving Dr. Malatesta (the inimitable Igor Vieira). Dr. Malatesta dupes Pasquale into thinking that he has found the ideal candidate for a wife. He proposes his sister Norina (Eileen Meredith), whom he claims has recently left the convent. Knezevic both charms and dismays us with his characterization of a foolish old man pursuing a beautiful young girl in this timeworn tale of a January to May relationship.

In the opening act, the outstanding soprano Meredith, dazzles as Norina, a little minx. We are treated to Meredith’s substantial acting talents as she portrays a wide range of female personality types for her brother, Malatesta. They choose to disguise her as a timid ‘Sofronia’ as the right type for Don Pasquale.  In the famous aria “Quel Guardo, Il Cavaliere” she boasts, “I too know the magical power of a look at the right time and place…” She knows well the effect that women have on men.

Norina agrees to dupe Don Pasquale, because she and Ernesto (Sergio Gonzalez) are lovers; they need the old man’s inheritance to start their married life.  Don Pasquale wants to disown Ernesto for refusing an to submit to an arranged marriage. In order to create a better future for herself and Ernesto, Norina is willing to go for broke for the man she loves and the money they need.

Sergio Gonzalez, tenor, makes his Island Opera debut in the role of Ernesto and recently received his Masters under the tutelage of Cesar Ulloa at the San Francisco Conservatory of Music. He returns to the role of Ernesto, performed with the North Bay Opera. Gonazalez’s vocal and acting talents blend well with the Island City Opera company–a valuable prize for future operas.

The singers are supported by the dynamic conducting of music director, Phillip Kuttner and his 16-piece orchestra. Donizetti’s genius is evident not only in the beauty of the score, which he completed in only eleven days. As for the libretto, Giovanni Ruffini refused to put his name on it because Donizetti changed it so much. The Elks Lodge Ballroom offers intimacy and excellent acoustics, creating a ‘surround sound’ effect–a unique musical experience.

In the Commedia Dell’Arte tradition, “Don Pasquale” offers plot twists and comic characters that delight at every turn. As Dr. Malatesta, Igor Vieira, baritone, brings a tremendous voice and considerable acting talent.  Vieira, a native Brazilian, has more than 90 operas to his credit.

Vieira complements Knezevic beautifully throughout, especially in the third Act duet in the Third Act when the two men come off the stage, using only flashlights to highlight their faces. Sung in the fast patter of the challenging Bel Canto style, their voices blend marvelously as they sing of the follies of love.  Their performance caused the audience to burst into rousing, spontaneous applause. We will see another side of his talent when Vieira will be the Stage Director in the upcoming Island Opera production of “Don Quichotte.”

In the finale, Norina leads the chorus in the moral of the opera when they sing, “When you are old and you try to get remarried, fortune doesn’t usually go your way.” Don Pasquale accepts this truth and gives his blessing to the young couple.  “Don Pasquale” is one opera where the female lead comes out on top.

The opera only runs for two more performances: at 7:30 PM on Friday, January 27, and a closing matinee at 2:00 PM on Sunday, January 29. Tickets are inexpensive and there are no bad seats in the Elks Lodge’s intimate venue which showcases the talents of this outstanding opera company’s talented group of musicians and singers. If you are looking for a way to introduce a younger member of the family to opera, this is it.  You can easily read the English super-titles from the back row. The acting is superb and the show is hilariously funny!