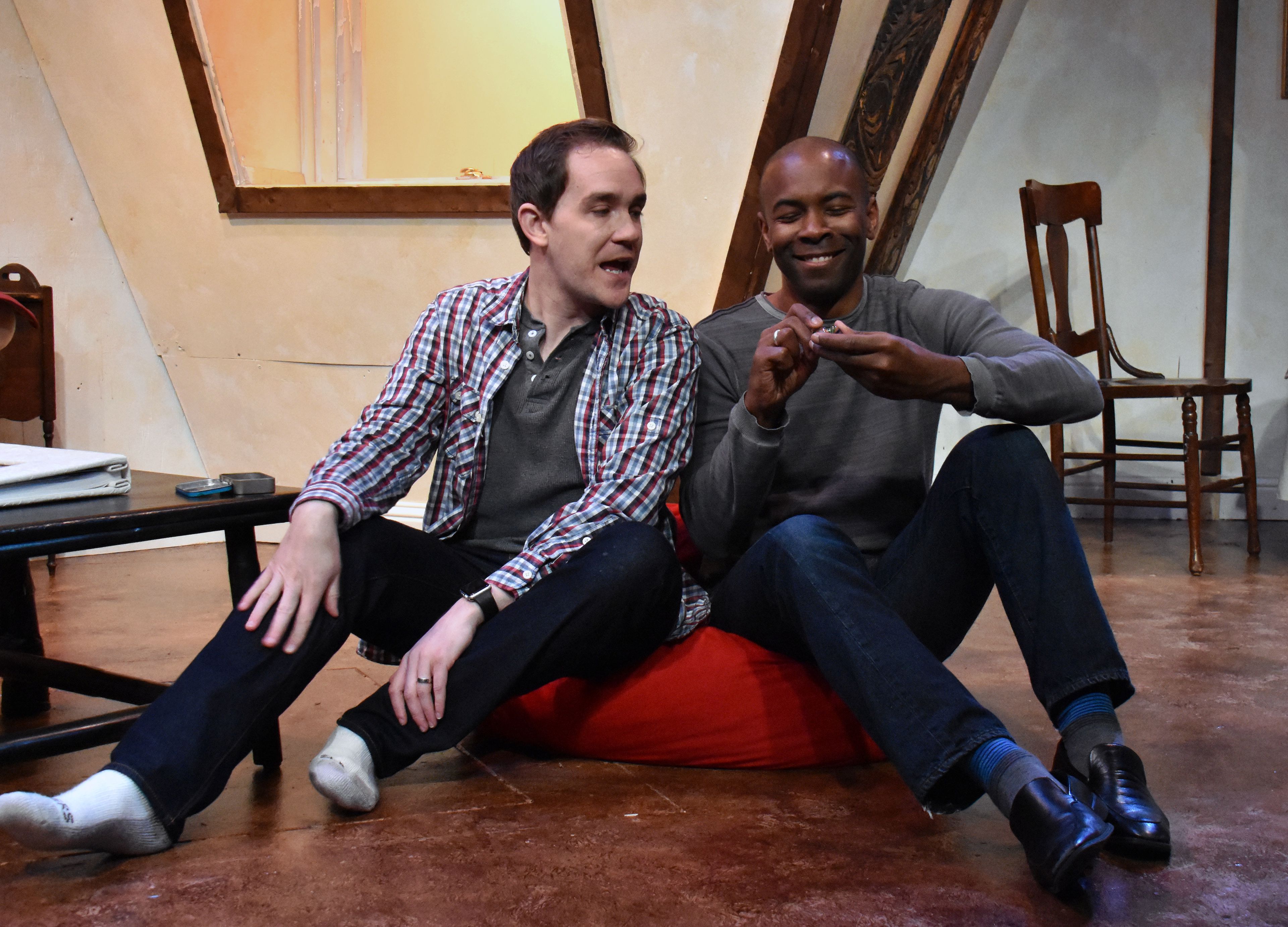 “Belleville” will take you from charming to chilling in a performance without intermission. The cast is excellent, embodying their characters fully. The lighting and sound is effective and immersive, and together with the understated set, drops us effortlessly into a busy immigrant neighborhood in Paris.

At first, Abigail (Alisha Ehrlich) and Zack (Justin Gillman), recently married, have set themselves up nicely as a young American expatriate couple in pursuit of their joint happiness. Their pursuit has brought them to Belleville, a vibrant and energetic tapestry of ethnicity and culture from the former French colonies, where they have rented a cozy apartment from a Senegalese couple, Alioune (Nick Sweeney) and Amina (Nkechi Emeruwak).

Zack, a med student, works on pediatric AIDS research with Doctors without Borders, enabling their move to Paris, while Abigail tries her hand at teaching yoga. Zack’s impish insouciance and Abigail’s cheerful friendliness endear us to them, quickly. Ehrlich and Gillman sweetly embody their pluck and ambition, and their obvious love for each other.

Yet fractures in the American couple’s relationship, hidden and minor at first, reveal themselves and grow steadily and alarmingly. What at first appears trivial grows in significance. Their minor misunderstandings become larger cracks, undermining the foundation of their love and commitment. Ironically, the intense pursuit of their mutual happiness steers them down an increasingly wayward path.

Amy Herzog has written touchingly and sensitively of two people who want to be a happy couple so much, yet sabotage their relationship in striving for it. As much as they want to be together and make their relationship work, it becomes increasingly possible that they may be as far apart from each other as the first letters of their names. Let’s say that honesty is not their prime virtue.

Alisha Ehrlich’s Abigail is both approachable and off-putting, often at the same moment. Although we remain sympathetic to Abigail, revelations about her strain our empathy. She requires meds to maintain emotional and mental balance. This is neither her fault nor her choice, but she also decides to go off the meds and she drinks more than she can handle.

Justin Gillman’s Zack draws us in as quickly, with his caring and concern for Abigail, while he secretly struggles with his own demons. He has not been forthcoming about himself,  his work,  or a certain matter of late rent payments.

Like a loose thread that’s pulled, Zack makes the first step to a great unraveling. Our hearts go out to the floundering young couple, as they sink deeper into their own traps. We still wish them well, even when it becomes evident they may not deserve our faith .

While the Americans descend into their emotional vortex, Alioune and Amina embody stability and a work ethic stereotypically attributed to English Protestants. Nick Sweeney provides Alioune with a quiet, forceful presence that contrasts with Zack’s swaying emotions. When his wife Amina appears, she matches Alioune’s generosity with her own assurance. Nkechi Emeruwak’s Amina presents clear, forceful actions, even more grounded than Alioune’s. The Senegalese couple form a bulwark against the emotional fragility of the Americans. In their presence, Abigail and Zack’s erratic orbits appear even more turbulent.

The Paris neighborhood of Belleville, today’s melting pot of immigrants and cultures, acts as the cauldron testing both couples’ commitment to themselves and to each other. Love can certainly thrive in “Belleville,” but not without a foundation of honesty and trust, and anything more than a romantic notion of what happiness is.

Abigail and Zack undergo painful revelations, and Belleville is the place to learn. But only if they are ready, and it’s not already too late. You have to see for yourself how playwright Amy Herzog brings their problems home to us—all the way from Paris.