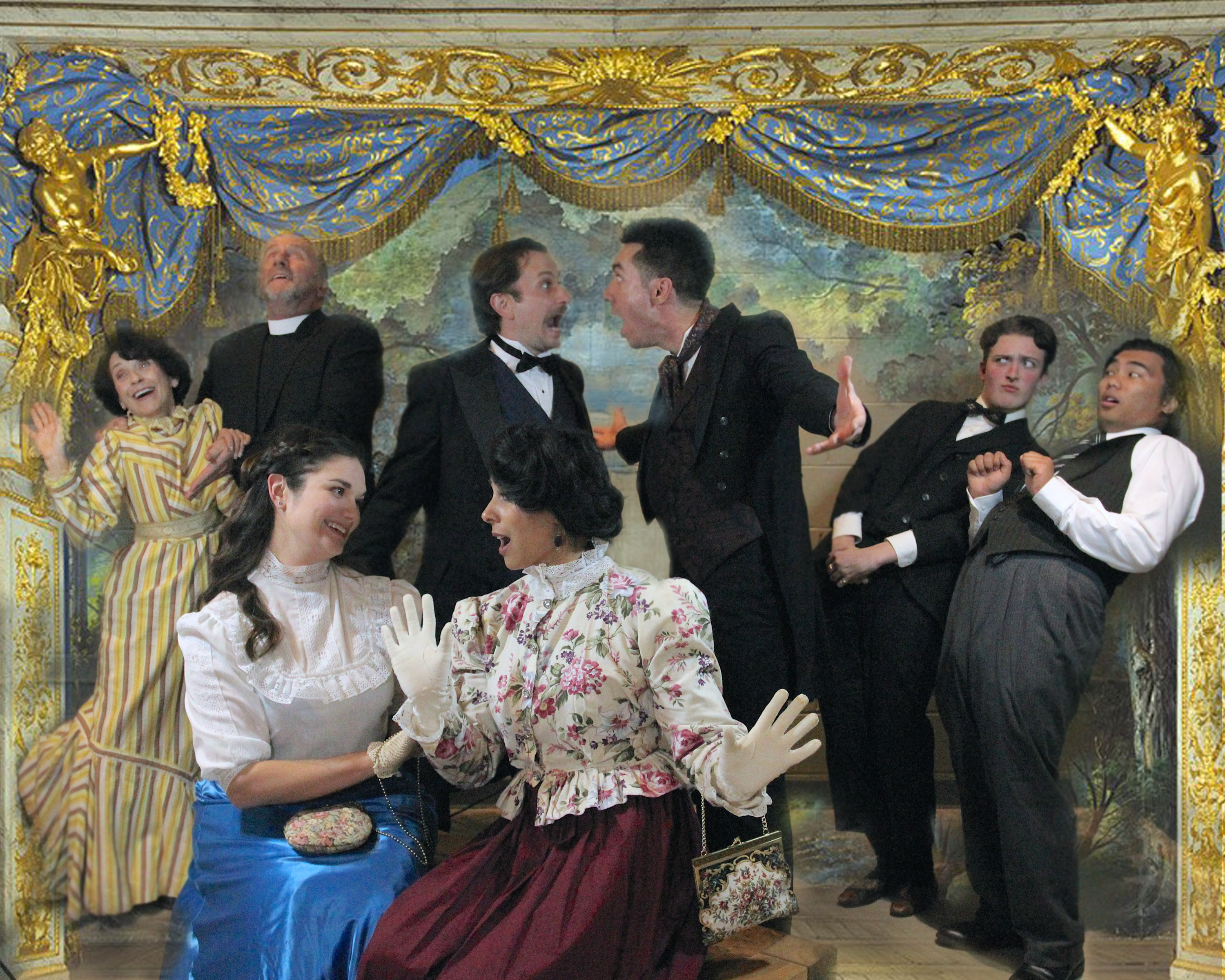 Oscar Wilde Asks US: “What’s In a Name?”

What could a bunch of rich, snobbish English people, living at the height of the British empire, whose sticky hands reach around the globe, have to say to us in 2017?  Oscar Wilde’s “The Importance of Being Earnest” (1895) speaks to us because those hypocritical, self-important Victorians clutch onto their out-dated, ridiculous social class prejudices. And we elect a billionaire–in the mode of Lady Bracknell–to harangue us. Actors Ensemble of Berkeley makes brilliant fun of the Engish “upper-class” devotion to family names and inherited wealth. Director Nicole Menez wryly takes the playwright at his word about the importance of names, delivering Wilde’s satire with heaps of slyness and humor.

The remodeled thrust stage at Live Oak Theater delivers the action right into our laps. “Earnest” begins in the London apartment of  Alergernon Montcrieff (a rakish Davern Wright), with artwork reminiscent of Aubrey Beardsley, lovely period set design by Lisa Siegel Sullivan, and graphics by Vicki Victoria. Director Menez draws us into this Victorian world with the pre-show entrance of Algie’s cheeky butler, Lane (a smug Laur Ragg). Lane impertinently enters and stretches out on the elegant settee and begins reading a book. The play is on, breaking rules right from the start.

Enter our hero, Jack Worthing (a self-righteous Frances Serpa), Algie’s best friend, who lives in the Country, but goes by the name of “Ernest” in the City. Jack (as Ernest) visits Algie, and they trade witty banter about love, social class, and cucumber sandwiches. Jack is pursuing his lady love Gwendolen Fairfax (a sharp-witted Laura Domingo Short), who insists on marrying a man named Ernest. To make things more complicated, Jack/Ernest is deemed unsuitable by snobbish social class standards because his actual family origins remain mysterious.

Lady Bracknell (imperiously embodied by Marcia Kimmell) announces that her daughter, Gwendolen, will not be allowed to “enter into an alliance with a handbag,” to get rid of Jack/Ernest. Her daughter refuses to accept her mother’s rule and rebels a little bit. After all, Jack/Ernest is good-looking, well-mannered, and rich. All he lacks is something that cannot be earned: a family name.

Jack is very earnest about being Ernest for Gwendolen; so serious, he wants to christen himself “Ernest.” But he cannot change his status as an orphan without “proper” family ties. He cannot please the fierce Lady Bracknell and become a man worthy of Gwendolen. A first name, land, and money is simply not enough for the “upper crust.”

When Algernon pokes and prods Jack, he discovers the secret to his friend’s two identities, all the while plowing through a large platter of cucumber sandwiches. (Applause for Wright’s ability to eat while speeding through British English without choking.)  Algie, in turn, reveals to Jack his own deception–a fake friend named Bunbury. Algie regularly claims he has to visit poor sickly Bunbury whenever he wants to dodge family demands. Everybody has a way of avoiding the facts—sound familiar? These arrogant guys go to comic extremes to evade the social hierarchy that they actually worship—hypocrisy and humor abound!

Algie gets it into his head that he must meet Jack’s supposedly naive ward, Cecily Cardew (a sprightly Kirby Hoberg), who is ensconced at the country house. Of course, Algie has to lie his way in—by earnestly becoming Ernest, Jack’s made-up, younger, scoundrel of a “brother” whom Cecily has never met.

Act Two introduces us to Cecily in her garden, avoiding her German homework, under the silly and rigid tutelage of an exasperated Miss Prism (a delightfully spacey Maxine Sattizahn). With all the flair of a true Algernon, the captivating and talented Davern Wright bursts in, disguised as Jack’s non-existent bad-boy brother Ernest, and all hell breaks loose! Although Algie is a certified cad, lying about his identity, he urgently presses his instant attraction to “little Cecily.” Yet another rich guy who refuses to take take “No!” for an answer.

Cecily is determined, like Gwendolyn, to have the “Ernest” she has fantasized about in her diary. Her list of rules for marriage is sweet and girlish and ridiculous. In fact, the modern woman still has lists of imaginary men to marry. Cecily’s guide to a man sounds like an earlier rendition of bourgeois courtship book that made a splash in 1995, called The Rule. Wilde knows women’s rules–when they want a “Bachelor” with all the right class markers.

Algie exits. Gwendolyn comes down from the city to the delightful country garden set, full of flowery ornaments. Gwendolen and Cecily think that they have fallen in love with the same Ernest–another confusion of brands. Under their thinly veiled cattiness, they seem to like each other. It’s great fun to follow their Victorian dreamy exploration of love and earnestness–a great scene that makes far more sense than do the trivial males. After all, Wilde has told us in his subtitle that this is “A Trivial Play for Serious People.” He means to unwrap the social rules and destroy them–if we are serious enough to see through their trivial pursuits.

Miss Prism, the tutor, batty and flighty as a little bird, flits about these comic confrontations,  offering a funny foil to the pious Dr. Chasuble (a subtle and sympathetic Lee Voigt). Merriman, Jack’s country butler (a daffy Lorenz Angelo Gonzalez) is later joined by Lane, Algie’s city butler, forming a kind of tennis match. The hilarious send-up of social class, family names, and surly snobbism combine to make Wilde’s play the Number One Social Satire for our time. Wilde tells us that T-rump with his name in gold in the clouds is no better than a handbag abandoned in Victoria Station–even “on the Brighton Line.”

With Wilde’s convoluted comic plot and AEB’s charming exposure of the trivialities that threaten our lives echoing in my ears, I can still hear the laughter. You will love a Wilde ride at Live Oak Theater–enjoy the snobs slashing out at each other. It’s serious fun.

“The Importance of Being Earnest” by Oscar Wilde, directed by Nicole Menez, by Actors Ensemble of Berkeley, at Live Oak Theater, 1301 Shattuck Avenue, Berkeley, through Saturday, February 11, 2017. Info: ​aeofberkeley.org