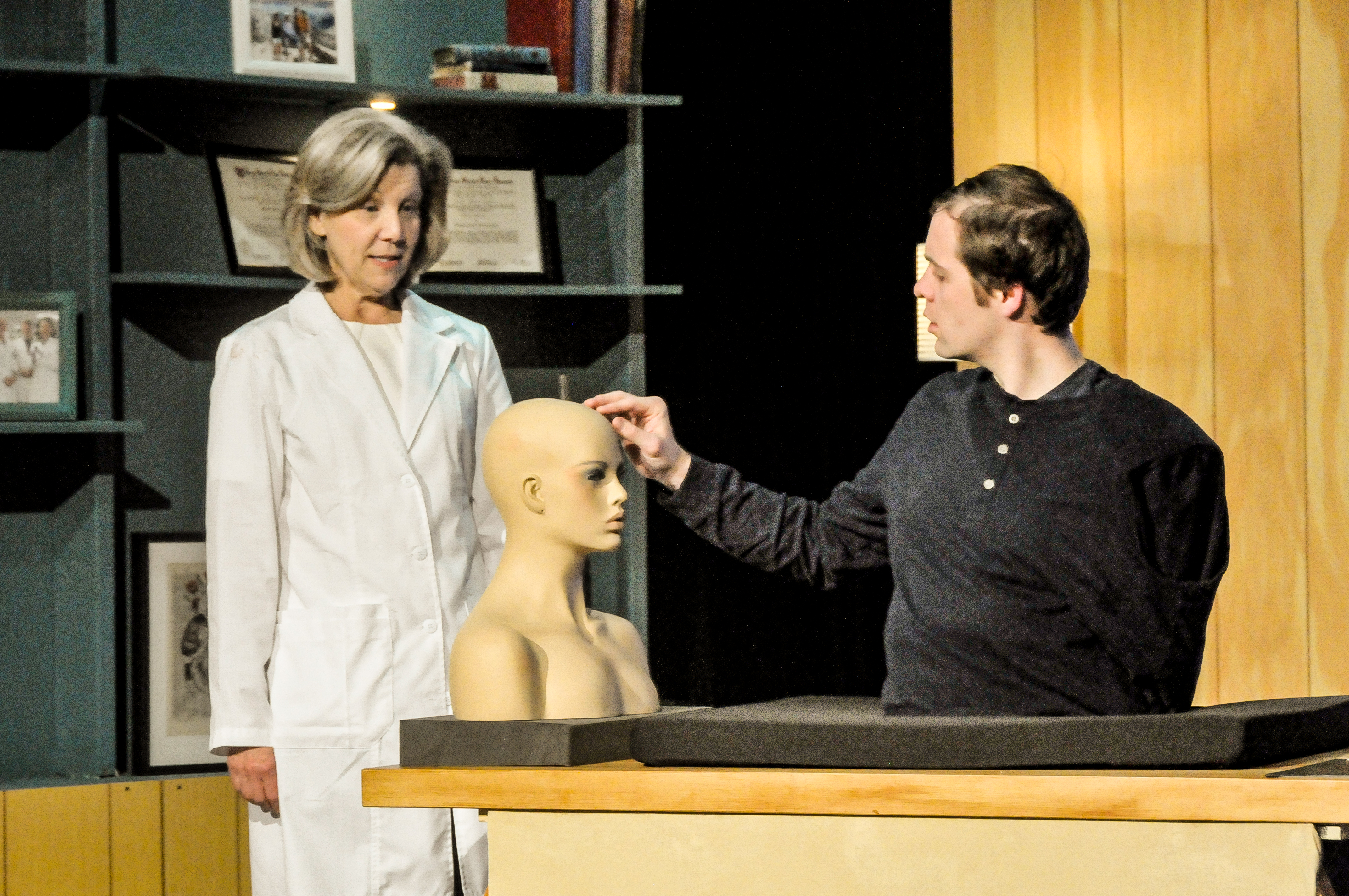 Acting Human in the Valley

We have all heard by now that automation will replace many more of today’s jobs. This startling fact is announced as if the matter were entirely settled, with no room for debate. Increasingly, our talk turns to robots, and Thomas Gibbons’ “Uncanny Valley,” on stage now at the Pear Theatre in Mountain View, shows us what happens when humans interact with lifelike robots. In the Valley, engineers refer to that uncomfortable feeling with a “close to human” android as the “uncanny valley.” I’m not so sure Gibbons delivers on the promise of the title with a clear picture of the uncanny valley experienced by Claire (an engaging Mary Price Moore), who, along with her husband, is a leading researcher in the robotics field. The play is set in her office, which is both clinical and personal, like Claire herself. Moore ably captures the clinical Claire, helped by the office’s large wooden shelves with two photos and some favorite books.

Claire’s office is sparse, considering she spends so much of her life there. The action begins with Claire talking to half of a man, upright on a desk, whom she appears to be instructing. Her student is the robot Julian (a clever Evan Kokkila Schumacher), which mechanically swivels its head to see the surroundings.

Claire is perfunctory, and Julian the robot makes a point of being awkward and mechanical in his voice. Claire begins by sounding like a kindergarten teacher, visibly pleased when Julian picks up new expressions, more human ways of talking.  At this point, their interaction is charming and domestic. Director Caroline Clark has done an artful job  keeping our attention on the pair–the only two actors in “Uncanny Valley.” Between scenes, the aptly named Sara Sparks has created a pleasant lighting effect of colored light panels, inducing the feel of the future, for a play set a few decades ahead.  Claire uses a  “transparent” screen as her laptop, and an invisible phone, with what appears to be a microphone on her wrist.  We can easily understand this office in the 2030s, even with an advanced humanoid as a testament to the future.  The simple set ties us to Claire’s past, when she started her career in the teens.

When Julian gets his legs, Schumacher bounds around the stage taking in all the angles once denied him. We get a sense of what we gain by being able to move around in our space.  The play is also a meditation on acting itself. We want to believe in Julian’s authenticity, because we believe that we are authentic, or aspire to be. How easily we place our faith in surrogates, hoping that some goodness in humanity will guide their actions. Automation? No problem, so long as we get to call the shots.

Schumacher’s early portrayal of the robot rings true and is endearing in its naivete. Moore’s Claire retains the control, enjoying her power, and Julian’s rapid advancement. Later, Claire is overshadowed by Julian, her creation. As soon as Claire downloads a benefactor billionaire’s personality into Julian, everything changes. Claire reveals to Julian that he is the replica of the dying billionaire, whose entire identity now rules the eternally young Julian. The new Julian can run the tycoon’s companies, after the billionaire’s imminent death.

Schumacher convinces us of the arrogance of the billionaire, who would buy his way into eternity. He paid a quarter of a billion dollars for his makeover project, literally putting money where his mouth was. Schumacher dominates the stage, channeling his billionaire personality. His arrogance may remind you of other billionaires you may know, but Director Caroline Clark preserves some of his charm, here, too. Claire cannot quite confront the transformed, bossy android. She does get to push the Billionaire Julian over into the “uncanny valley” and tell him that he is just a robot!  You have to laugh a bit at the naivete of someone who thinks that the robot will have her ethics. After all, who has been paying for all this research all these years?

As Claire, Moore embodies subtle ambivalence, when Claire explains how she has sunk all her faith into machines, and lost touch with human feelings in the process. To get really angry at Julian would take Claire to a place she does not know. After all, Claire has spent her life on robots. Moore is challenged by the subtleties of Claire’s character, and she rises to the challenge. It’s frustrating that the character that grows in this play is Julian, who goes from table, to lab, to limousine and airplane. Julian the robot gets to run things, while Claire has to go home and tend to her ailing husband, who used to be her boss. Well, we are better than that: We care for each other, we’re not cold and robotic, are we?

Our minds yearn for movement, and this production will get your mental and emotional gears going. We might ask, “What makes us human and complex beings who cannot yet be created in labs?”  You don’t need to be a billionaire to be alive, to be yourself. And if there’s some fear of mortality hovering around all of us, that too is what it means to live. Look into the future and its perils at “Uncanny Valley” at the Pear Theatre, asap.