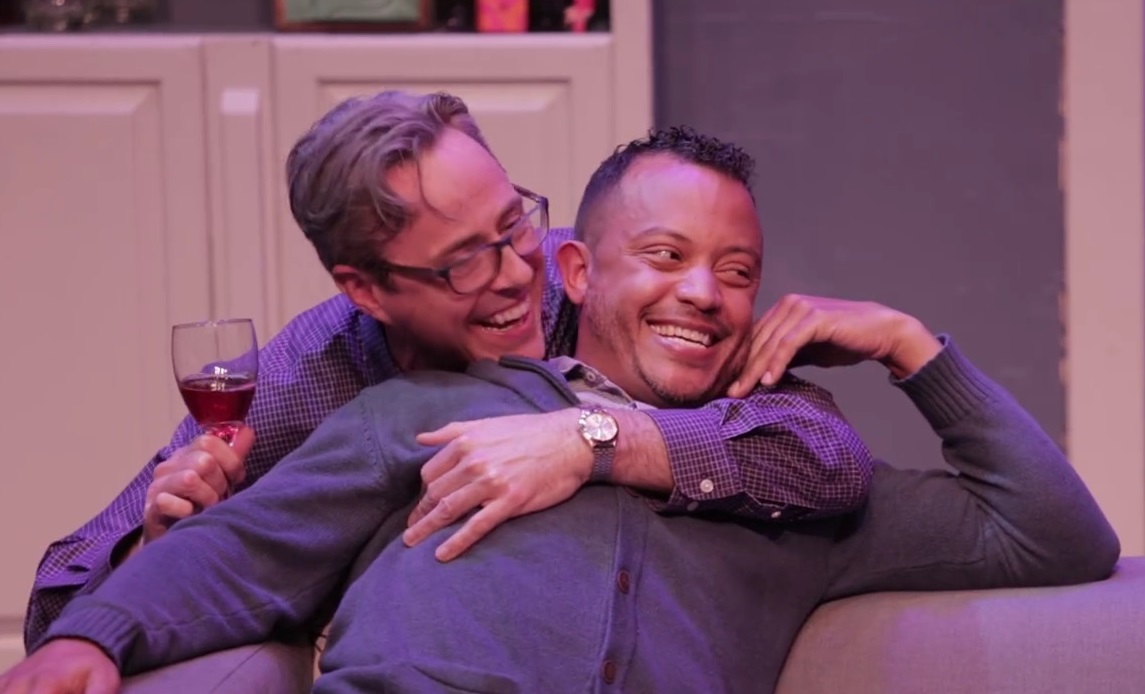 Watch that next step—it could be dangerous. Michael McKeever’s play “Daniel’s Husband” will alert you to unexpected perils, at New Conservatory Theatre Center. The play will open soon in New York, so beware of missing something special.  It’s a gay play, sure—but it’s also the most profound and heart-wrenching spectacle you can hope to see—acted by brilliant actors, and directed by Allen Sawyer with perfect timing and sensitivity.

“Daniel’s Husband” lingers in memory long after leaving the theater. This is a real play, not a warmed over novel or movie or retread—this is contemporary U.S. drama. It’s about gay marriage: sophisticated Daniel (the tall, lithe Michael Monagle), a pedigreed architect, wants his lover of eight years to marry him. He is in perfect tune with his lover, Mitchell (the impressive Daniel Redmond), a successful writer–but they disagree about marriage.

The argument between Daniel and Mitchell about whether to marry in the Brave New World we live in gets pretty serious and bitter: the more traditional and privileged Daniel practically begs Mitchell to finally make their union legal.  But Mitchell, a bit younger and more rebellious, uses his wit and earthiness to argue against the conventional marriage demands. They both make brilliant points and you find yourself torn between them: to marry or not to marry, that is the question.

They live together in a swank upscale apartment with treasured works of art, and they are the perfect classy gay couple. Mitchell is coming out with his latest book, and making smart quips with his editor Barry (a warm, campy Nathan Tylukti). They are gathered in Daniel and Mitchell’s robins-egg blue walled home, dishing and dissing. Visiting them is Trip (the hip, blue-lipped John Steele Jr.), who is Barry’s twink flavor of the month. All four guys are delightful and sharply portrayed.

Trip who works as an in-home caretaker nurse is in awe of these artistic people and surroundings. He is a sensitive young man, all tricked out in the latest hipster duds. But he is more serious and wiser than the others. He forms an important and lovable counterweight to all this banter and bravado.

But is marriage so important—or, is it just a point to argue about? Mitchell doesn’t like the abstract painting by Daniel’s father that hangs over the fireplace, either–their tastes clash, highbrow versus lowbrow. And maybe they are just too “nice” to get our sympathies, after all.  They seem to be getting along well, even when Daniel’s domineering and stylish mother, Lydia (the sly Christine Macomber) comes to visit and to annoy her son, as she always has. McKeever sets us up for possible cracks in their crystal—but then, the play turns and stuns us.

A terrible mishap happens at the end of Act One, sets us up for a new and serious confrontation in Act Two.  We have learned that Daniel still resents his mother for her self-centeredness when he was a kid. And in Act Two, she has come to “help out” after he has undergone a change. Daniel Redmond captures the essence of an honest, devoted lover. Michael Monagle performs with calm and opposing genius.

Even after Daniel’s beautiful and heartfelt flash-back soliloquy, we are shocked by what happens next. Mitchell, the perfect gay son-in-law, has to handle Daniel’s mother. We are even more shocked by the battle between the unmarried gay couple and the busy-body mother. The regrets and conflicts and battles that follow present important questions about gay marriage, medical care, and family honesty.

Lydia is revealed as everything her son feared about her, as she escalates into war with Daniel’s unmarried “husband.” There is enough fall out here to account for a small nuclear explosion. What happens in Act Two you wouldn’t wish on anyone or his family—it is the highest irony that it happens to two such hyper-conscious people as Mitchell and Daniel.

With such superb acting and staging, there’s plenty to enjoy and be shocked about in this gripping and emotional production of “Daniel’s Husband.” We are all enlightened and elevated by this edge of your seat play at NCTC. They make you want to assert your rights.