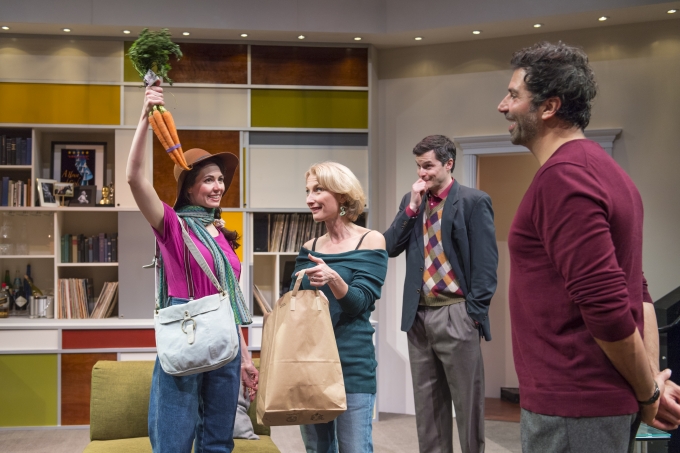 For the springtime, Aurora Theatre has pulled “The Real Thing” by Tom Stoppard (1982) out of its bag of tricks to give us the art of that “old dance.” In Stoppard’s famous 1982 play, we get witty love, lustful love, intellectual love, artsy love, and stage love. We even get political love, when an actress takes up the cause of an imprisoned soldier. And the question is: Which Love is “the real thing”? Here’s what the writer character, Henry, in the play says:

“I don’t think writers are sacred, but words are. They deserve respect. If you get the right ones in the right order, you can nudge the world a little or make a poem which children will speak for you when you’re dead.”

Henry (a finely tortured Elijah Alexander), a celebrated witty playwright in “The Real Thing,” tries to explain it all to us. His answer is the beauty of language. Stoppard’s is the magic of stagecraft, as he fools us with an opening scene from Henry’s play “A House of Cards.”

Stoppard takes us from the clever staging of a supposed scene from Henry’s play to a “real” scene between Henry and his beautiful actor-wife, Charlotte (the ebullient Cary Paff).  Sometimes, we are not sure if we are looking at the play-within-the-play or at Henry and Charlotte’s real life.

The “real thing” turns out to be even funnier and more moving than “the staged thing.” Their repartee, their one-liners, and their convoluted characters form the backbone of this Stoppard classic. And Aurora’s actors, directed by Timothy Near soar beyond the merely witty into the rarer air of love among the ruins of a seriously self-regarding class of artists. They nail it.

To top it all off, we get to see and hear 80s obsessions—pop music, casual clothes, and multi-colored sliding Danish cabinets and couches. Scenic Designer Nina Ball pays wonderful attention to detail, color, and style.

Henry and Charlotte, the playwright and his leading lady, live a glamorous life with their rebellious 20-something daughter, Debbie (the delightful Emily Radosevich), who tells too much truth. They are British but they could be New York or Hollywood or San Francisco folk. Henry, anguished and neurotic, agonizes over his wife, his plays, his musical obsessions, and his friends. And oh–the little affair he’s having on the side with his friend’s wife.

Now this sounds like a romantic comedy, but that’s not all for Stoppard—sure, it gets complicated, and Henry does run off with Annie (an enchanting and wise Liz Sklar). Then, he somehow remains friends with her husband, Max (an engagingly suffering Seann Gallagher). Two couples, breaking and joining—it sounds familiar; but these two couples of artists, in their personal philosophies, struggle to embrace truth and morality in a very Californian way.

Henry’s moods, his soliloquies, his attempts at being decent and devoted at the same time define vintage Stoppard. This play is made for smart audiences who follow Henry’s lovely lingo, Charlotte’s elegant anguish, Annie’s cultural cause, and Max’s selfless devotion.  Their love of words, ideas, and fads; their discussion of music and theater; their pitiless involvement with each other and their art—they all move us deeply—Stoppard-wise.

Suddenly we find that Annie is involved with the political cause of a rebellious soldier who spoke out against the government and got thrown in jail for years. Here we have a pre-Chelsea Manning, or a prophetic Edward Snowden. While the soldier, Brodie, languishes in jail and writes a bad play about his revolt against the Army, Annie devotes herself to getting Brodie out of prison. Annie, now Henry’s companion, insists on the playwright helping out the cause. She is full compassion and fortitude. She even acts, herself, in Brodie’s dubious play in Glasgow.

On the train, she meets her fellow-actor Billy (a lusty Tommy Gorrebeeck), who sweetly seduces her—putting yet another fly in the marital ointment. Is their affair only sexual or does it reveal more despairing depths for Henry to plumb? The complications are hilarious and tricky. And the love scenes between Gorebeeck and Sklar magically unify the personal, the political, and the perilous in one deep breath.

What happens when Annie and Billy perform Brodie’s play. And what happens when Brodie (played by Guess Who?) hilariously turns up at Henry and Annie’s doorstep? Henry, the mindful playwright, takes us by the hand and conducts us through his amazing ruminations. Elijah Alexander puts us right at home in Henry’s self-deprecating wit—we come to love him, as he tries to make all odds even.

Plays within plays, language that soars and titillates, ideas that run rampant—Stoppard hits the mark and we leave wondering—which one version of Love is “The Real Thing”?

“The Real Thing” by Tom Stoppard, directed by Timothy Near, at Aurora Theatre Company, Berkeley, through Sunday, March 5, 2017. Info: auroratheatre.org