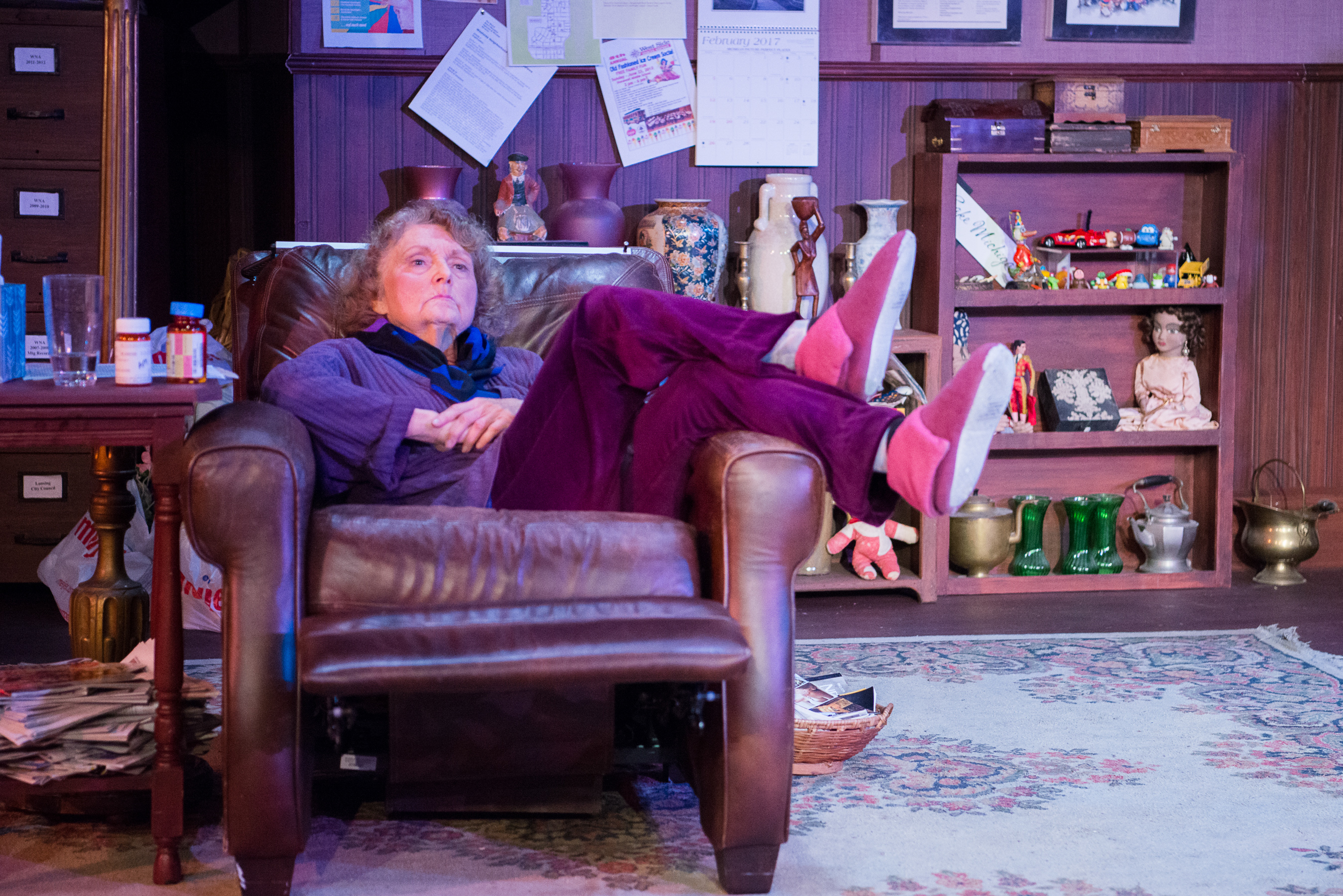 Lisa Kron Makes Healing Comedy of Herself, Mom, and Allergies

When Lisa Kron, the writer of “Well,” uses herself as a character called Lisa in her own play, the stakes are already pretty high. “Lisa” struggles to make a play out of her painful feelings about her mother–in a sprightly comedy that breaks all the rules of theater. Meanwhile, her mother suffers from a life-long “family illness.”

“Lisa” talks right to us, in the audience—breaking down that fourth wall right from the get-go. The role was originally played by the writer herself, when it opened off-Broadway in 2004, before it went on to Broadway in 2006. Lisa Kron also wrote the script for the Tony Award-winning “Fun Home.”

The character Lisa (a witty, anxious Kate Dunlop Tomatis) starts by nervously telling us that this play is not about her and not about her mother Ann (the endearing, bubbly Marlene Walker). No, Lisa explains that her play is about illness and getting well. Director Susan E. Evans runs a tightly knit show, using Kuo-Hao Lo’s whimsically messy set for Mom’s collections in the homey living room.

Of course, we never believe Lisa because “the lady doth protest too much.” The wonderful joke is that the play really is about Lisa and her mom, Ann Kron who is napping center stage in her Lazy-Boy lounger right in front of us. You will never find a more opposite mom and daughter, ever. One is a do-er and the other a tortured artist.

In fact, the play is mainly set in her Mom’s living room, where Ann naps, gets alarmed, speaks for herself, helps out her whole community, and generally nurtures and tends to the needs of everyone.  Oh, and she also cures that New York suburb of racism in the 50s, too. Not a bad job for a supposedly chronically ill and severely allergic mom.

Of course, the character of Lisa never understands her mother, who engages people and issues directly and joyously—like Betty White on steroids. Mom tackles personal and political issues with equal parts grace and charity. A hard act to follow.

Lisa is all over the stage, nervous, anxious, self-deprecating, and self-analyzing, wildly.  Meanwhile, Mom is napping, curing, politicking, and serving cake to the whole Ensemble.  Although playwright Kron calls “Well” a “solo show with other people in it,” we slowly realize that the character “Lisa” has her own narrow perspective on their mother-daughter bond. We revel in Lisa’s unconscious self-exposure and laugh out loud at her funny rationalizations.

The Ensemble plays several roles—first as patients in a self-congratulatory Allergy Hospital. Beth Chastain plays a humorously depressed patient who can never be pleased. And Pam Drummer-Williams plays an irrepressible upbeat patient who sounds like Chatty Cathy—both hilarious in devotion to their “allergies.”

Ben Knoll does a great high octane, hypocritical nurse; while Reg Clay plays an amusing drunken neighbor. But Mom steals the show, as she is meant to do—healing the neighborhood, figuring how to get people together—black and white, left and right—creating and organizing the neighborhood until they ease her out.  Mom takes it all in stride, serving more cake and assuaging her chronic pains.  Everyone loves Mom.

Lisa has problems which evolve in quirky ways, as she confides in us—letting us know that her play is about illness and wellness and how it happens. We see Lisa getting better, slowly curing herself—of allergies, of anti-Momism, of being alone. The process lets us laugh out loud, and let out some of those toxins that keep us from getting well.  Enjoy!

“Well” is a brilliant and focused play, that even has an intermission, which gives us time to think about the progress of healing and cure. During the play, we wonder if, like Mom and Lisa, we can cure ourselves–or at least those around us. We can, if we can care enough, like Mom. It’s hard to be upstaged by your own mother. But wit heals all in CCCT’s exuberant “Well.”