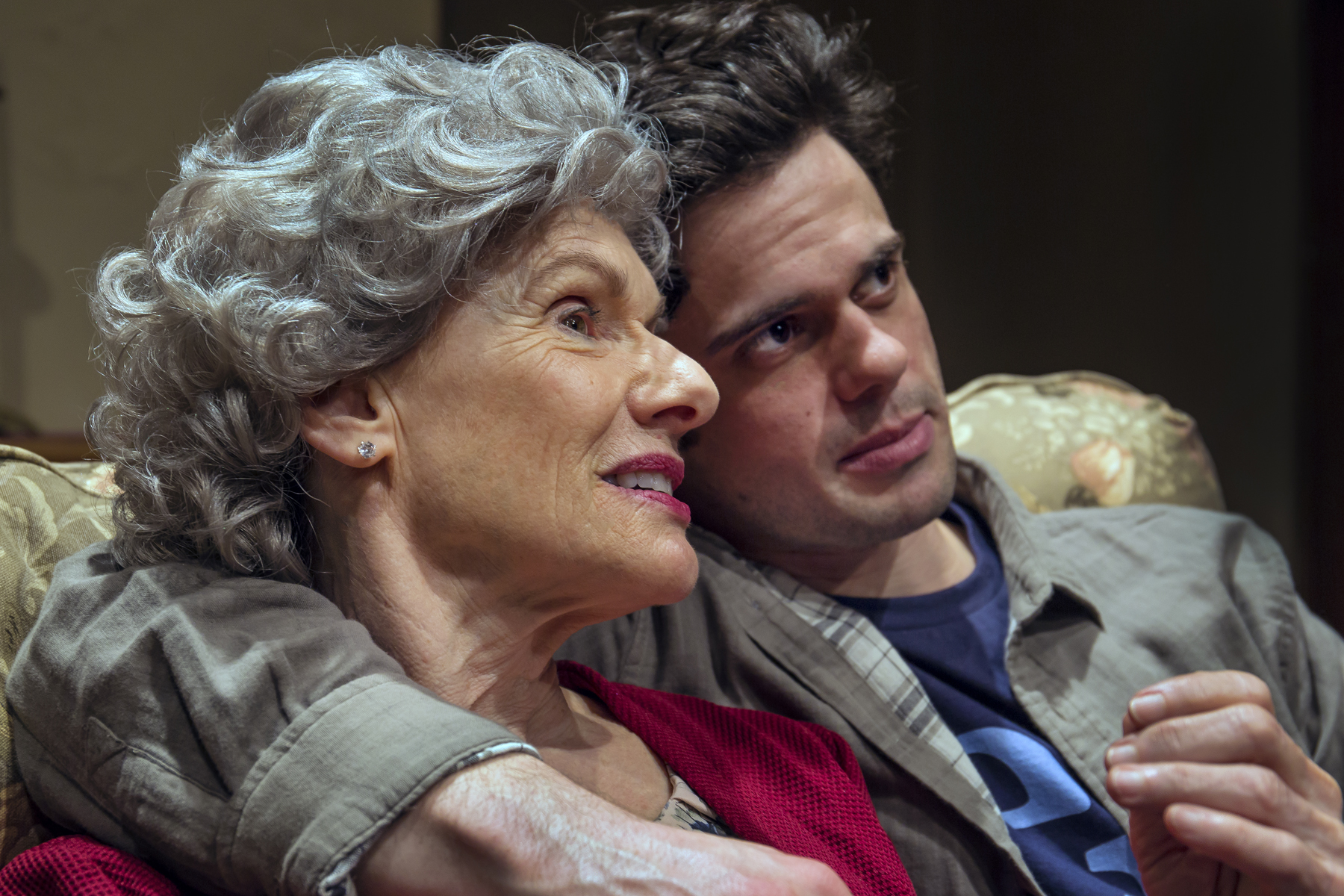 Potterveld Challenges Us with Sex, Guilt, and Twins

Around the four sided playing area, in a lovely Victorian living room in the Berkeley City Club, Central Works presents their World Premiere #54, cryptically called “Years in the Hundreds.”  Jesse Potterveld’s new play from Director Gary Graves’ prolific Writers Workshop turns out to be a psycho-sexual thriller that trades in mystery, seduction, murder, and cross-generational love. But this time, two older ladies who are twins, lead on an eager young suitor.

If you are intrigued by a story that features elderly twins, Jessie and Inez (Tamar Cohn and Anne Hallinan) and their love affair, seduction and torture of a handsome young book-dealer called Marcus (Adam Roy), then this is the play for you. We get to enjoy Inez’s tying down the stripped young buck in his skivvies to a sofa, as he squirms and shouts. If you can feature a lavish dose of voyeurism, exhibition, and sadism, this is definitely your play. The broad-shouldered, sexy Marcus falls victim to Inez’s jealousy of Jessie’s young boyfriend. He is trapped between the two sisters, one seeking love and the other vengeance.

The performances, all three, are perfectly calibrated to draw us into the story of the shadowy, elegant, well-dressed elderly twin ladies, who are hiding out in their apartment—much like the Berkeley City Club parlor. They are attacking and alarming each other; they know each other’s secrets and vulnerabilities from thirty years of co-habitation.

There’s a mystery to unfold here as the regal Jesse plots and schemes her escape with the studly delivery guy.  As played by the hypnotic Tamar Cohn, you want to watch Jesse as she conspires to leave her sister and take off to Mendocino with the honest and desirable Marcus—who is in love with her—yes, he is. And, clearly, they are having a hot time, too. A police detective kind of love is in the air—it’s a thriller.

The twins dress identically, as the always elegant Inez tells us—the better to escape detection. But detection from what? From whom? There’s a mystery here, and bad blood between the trapped twin sisters, too. You have to spend some brain time to figure out what’s going on between the sisters—who can only venture out one at a time—and……..well, you have to find out why, it’s too fascinating…

Of course, the forceful and feisty entrance of the book boy begins to unravel their carefully constructed Chinese Box mystery. He learns to tell them apart—he knows something’s going on, and he wants to run off with his beloved Jessie. Inez is the enemy—and she’s the one who ties him to the sofa in his tighty-whities.  It’s hilarious, sensual, tantalizing, and well, full of mysteries.

I don’t know if we ever can figure out this dilemma—it’s a psycho-sexual thriller wrapped inside a Rubik’s cube. The play flies by in 75 minutes, leaving us breathless. With a witty, funny, and relentless script by Potterveld, and perfectly paced direction by Gary Graves, “Years in the Hundreds” is a jewel. I have to see it again to pick up more of the subtle jokes and eloquent staging. Worth a second ride.

“Years in the Hundreds” by Jesse Potterveld, directed by Gary Graves, by Central Works: The New Play Theater, at the Berkeley City Club, Berkeley, California, through Sunday, March 19, 2017. Info: centralworks.org