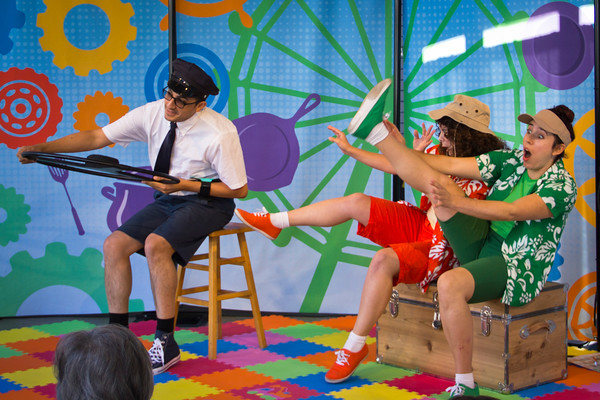 With trepidation, I arrived at the Bay Area Children’s Theatre in Oakland for a 10 A.M. performance of “The Wheels on the Bus.” It was raining cats and dogs, my 16-month-old daughter was cutting a new tooth (or four), and she had fallen asleep on the ride to the theater, which meant she was clingy, suspicious, and poised to have a meltdown.  I hoped I would not have to walk out of the show with a wailing toddler. Forty-five minutes. That’s all we needed. I ran through my inventory of tricks in case I had to try to entertain her on the sly: Keys, check. Crackers, check. Hair tie, check. Board book, check.

But the moment music started playing inside what looked like a glowing tent, Itasca was interested and curious. We followed the small crowd of toddlers and parents inside the “theater,” where circles of carpet designated “seats,” should we wish to use them. Two men were inside, playing with wooden cars on the floor, making up dramatic sound effects. It was an invitation to play, spoken in the simple language of children. And many of the children did play, building trains with the cars, sliding them across the floor, or simply taking the toys back to show Mom or Dad. In a few minutes, the “bus driver” announced the show was beginning, and the toy cars were whisked away. Enter our two main characters: Green Man and Orange Man (my names for them). They speed-shuffled around the stage, then froze, shuffled, then froze—composing their own soundtrack to the scene, heavy on drawn out “biiiiing” sounds.  Itasca, my daughter, was mesmerized, along with everyone else, regardless of age. The room sat silent, eyes glued to the actors as they worked through the confusing concept of finding a bus stop from an X marked on a map.

And then we were off on an adventure that flew by, thanks to scenes designed to engage children on a variety of levels, and that ended before anyone could get bored. We went to a carnival where we ate imaginary cotton candy and where Orange Man and Green Man constructed a miniature Ferris Wheel. We flew like airplanes. We made an enormous pizza and played a call-and-response clapping game with pots and pans. And of course, we rode the bus over bumps and around sharp turns.

The two main actors were phenomenal, acting with their faces, voices, bodies, and props, and rolling with the punches. The funniest moment in the performance came during a cooking scene, where Green Man and Orange Man made a creature who had an egg beater for legs, two wooden spoons for arms, and two pizza cutters for eyes. Green Man, who was operating the creature’s arms, accidentally dropped a spoon. Orange Man, who was operating the eyes, and voicing the creature, didn’t even hesitate. He made the creature yip and scream in shock—then gasp and splutter in relief as Green Man re-attached the arm. The room burst out in laughter, the parents laughing even harder than the children. Despite the show’s title, the song “The Wheels on the Bus” appears only a couple of times. In fact, the Men sing a few verses toward the start, and then a version appears at the end, when the audience is invited to have a dance party.

Things move perhaps a little too quickly for some young audience members. “I don’t like this play,” a little girl mumbled as she plodded back to her seat after an early scene. Orange Man and Green Man had just built a road, and invited the kids to come up and build a city with foam blocks on either side of the road. After a few minutes of fun, it was time to clean up and get back on the bus.

However, this same girl was dismayed when the show ended.  “It’s over?” she asked Green Man, refusing to budge from her spot right in front of the actors as everyone else gathered their things.

Green Man shrugged his shoulders and frowned. “It makes me sad too.”

As for Itasca, she didn’t care for any of the interactive aspects of the show. There was no getting her to walk up to claim her ticket to the carnival, or help build that city, or put toppings on the pizza, but that was only because she was riveted by everything going on. I don’t think she blinked even once, for fear of missing something. “The Wheels on the Bus” by Bay Area Children’s Theatre, or BACT, designed by Nina Meehan and Doyle Ott has productions in Berkeley, Oakland, San Francisco and San Ramon. BACT‘s “Theater for the Very Young”–for kids from six months to four years–is a joint venture with Children’s Fairyland in Oakland. Info: bayareachildrenstheatre.org