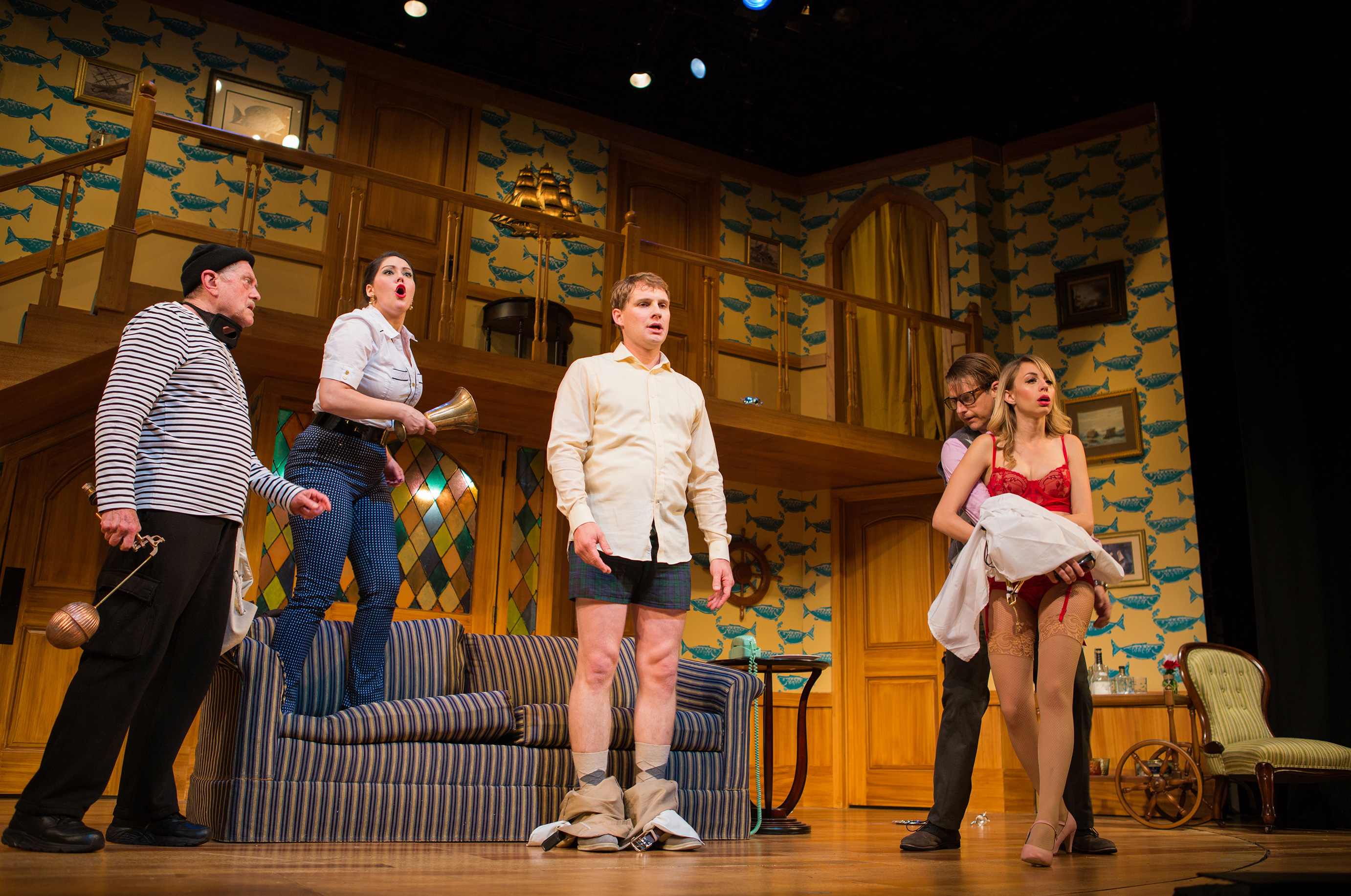 Give farce a chance.

Let’s start by accepting that farce is not everyone’s cup of tea.  That said, farce comes in different sizes and flavors.  Michael Frayn’s much honored “Noises Off” succeeds because its writing crackles; it employs all manner of comedy; and its setting and storyline being about the theater itself sits well with the theater-going audience.  Yet, for it to work requires precision of execution in blocking and movement and exceptional comedic acting.  Director Susi Damilano and her exemplary cast deliver the goods with a riotous production that exceeds any reasonable expectations.

As the curtain rises, we observe a rehearsal by an English theater company the night before the opening of a new play.  The play to be shown takes place in a fashionable home in contemporary England, and the comedy comes from the pratfalls of the characters in the play-within-a-play, and even more so from the wacky actors playing those characters.  The premise of the play-within-a-play is that the real estate agent commissioned to rent the home expects it to be vacant and takes a lady friend there for a tryst.  In time, they realize that not only is the housekeeper on the premises, but the absentee owners and a burglar also show up unexpectedly.  Mayhem ensues.

The cast hits the bulls-eye with each depiction, and the laughter cascades non-stop in the first act to a point that would be hard to sustain throughout the play.  Patrick Russell excels as the actor who plays the agent and must deal with the surprised owners. In his actor role, he is aphasic on the verge of incoherence, but time after time he repeats the same words again and again, and each time it’s as funny as the time before.  One struggles to explain how each blurting of “do you know what I mean?” gets laughs, but credit the actor.

As the tryst partner in the play-within-a-play, Monique Hafen sparkles.  Her character flounces about in a red bustier set that looks straight out of a Victoria’s Secret catalogue, extracting humor from her every vacuous, squeaky pronouncement.  And her endless posturing and flailing her long, slim arms about demonstrate a fine sense of physical comedy.

Other principals include Johnny Moreno as the director whose eye-rolling frustration with the ineptness of the actors and the proceedings never ends.  His characteristic dark sarcasm and condescension carry the desired bite, and his intelligence contrasts with the loopiness of the actors.

But the humor from the individual actors is only part of the fun.  The set acts as a principal character, as “Noises Off” is a slamming door comedy of the highest order.  S.F. Playhouse excels in set design, and six doors dot the interior wall of the house.  A great deal of humor derives from characters loudly passing through doors at all the wrong times and in all manner of disrepair.

The second act highlights a great asset of the Playhouse—its revolving stage.  It rotates to reveal the back stage of the house interior, and this act is all about the actors making their entrances and exits and the maelstrom behind the scenes.  During the play, noises are off (i.e., no talking) backstage, so a great deal of pantomime substitutes for verbal comedy.  So much action and fumbling goes on at the same time, that the audience is challenged as to what part of the stage to be watching.

The remainder of the cast that makes the evening entertaining deserves acknowledgement.  Kimberly Richards is memorable as the forgetful and aptly named actress Dotty, who plays the craggy housekeeper.  Craig Marker and Nanci Zoppi are benumbed and befuddled as the couple who find the strange goings on at their house, along with a series of notices from the Income Tax Department.  Richard Louis James is the picture of an inebriated actor who plays the burglar and is never able to get his entrance right.  Finally, Greg Ayers and Monica Ho play the production staffers who are supposed to keep the production moving smoothly, but rather, they add to the confusion – including a hilarious sequence of contradictory announcements they make about the time until curtain.  They are both very effective at more subtle humor amidst the raucousness surrounding them.