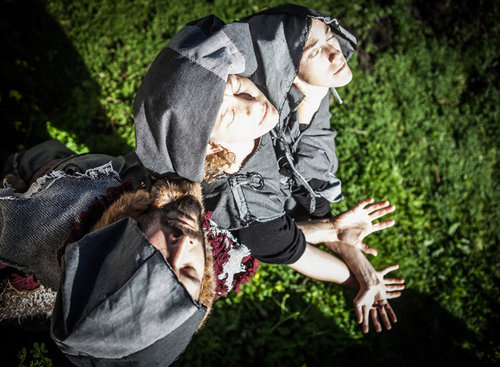 A saxophonist up on a hillside, nearly camouflaged by the surrounding foliage, sounds a clarion call. A woman gathers a massive length of rope with quiet intensity. A trio of performers hold aloft smoking, aromatic bowls of sage. These are some of the beautiful, poetic, and haunting images that present themselves in the early, outdoor scenes of We Players’ “Beowulf”—with dancers from inkBoat and the Rova Saxophone Quartet.

But first, audience members gather at the San Francisco Maritime Museum, where they’re free to enjoy the view and sea air from the back balcony. Then—100 strong on Opening Night—they’re led out to the park below and along a path with the bay on one side, and greenery on the other. Cast members and saxophonists can be spotted and heard here and there along the path. In Fort Mason’s Aquatic Park, we are invited to scoop sand into a small boat in honor of the fallen lord. Then, we sit or kneel on along a cement wall, watching as the actor/dancers below us on the grass enact a funeral ritual by what could pass as tombs—metal doors set into the grassy bank. Ava Roy, WE Players’ Artistic Director, delivers a stirring monologue about the dark and troubling times of the lost king, Beowulf, the Chief of the Geat Clan—with obvious allusions to Trump’s America. As a group, we climb a flight of stairs, go down a path, and indoors, to the lovely, historic Fort Mason Chapel, where we remain for the duration of the performance, another 90 minutes. Audience members enjoy a piece of bread and a bit of vegetable broth while the story unfolds. But there’s not much story in this production. Don’t come expecting a dramatization of the ancient Anglo-Saxon epic poem of the hero Beowulf slaying the monster Grendel. Through long monologues, snatches of dialogue, movement, and saxophone music, WE Players and their collaborators make indirect references to the tale. The story of Beowulf and Grendel serves as a point of departure for a meditation, militant and mournful, on the times in which we live–“monsters and heroes, courage and cruelty, darkness and light.” The simple set, four wooden ramps that rise up to meet a small stage from four directions, forming a cross, serves well for dramatic—and occasionally athletic—entrances and exits. Good use is made of candlelight and strobe light in Allen Willner’s simple yet striking design. WE Players present “Beowulf” as a dance theater spectacle, set to discordant, atonal saxophone music. At two and a half hours, it’s in need of cutting. Many audience members loved the show. Some, like myself, grew fidgety. If the goal is to wake people up to the darkness around them and the light within, more of the actual tale is needed. At the very least, provide viewers with a full cup of broth. Nonetheless, WE Players is to be commended for its creative and original use of historic and natural settings. No wonder Backstage.com and other publications have recognized them for creating groundbreaking immersive theater. Be on the lookout for their adaptation of Shakespeare’s “Midsummer,” in the summer.