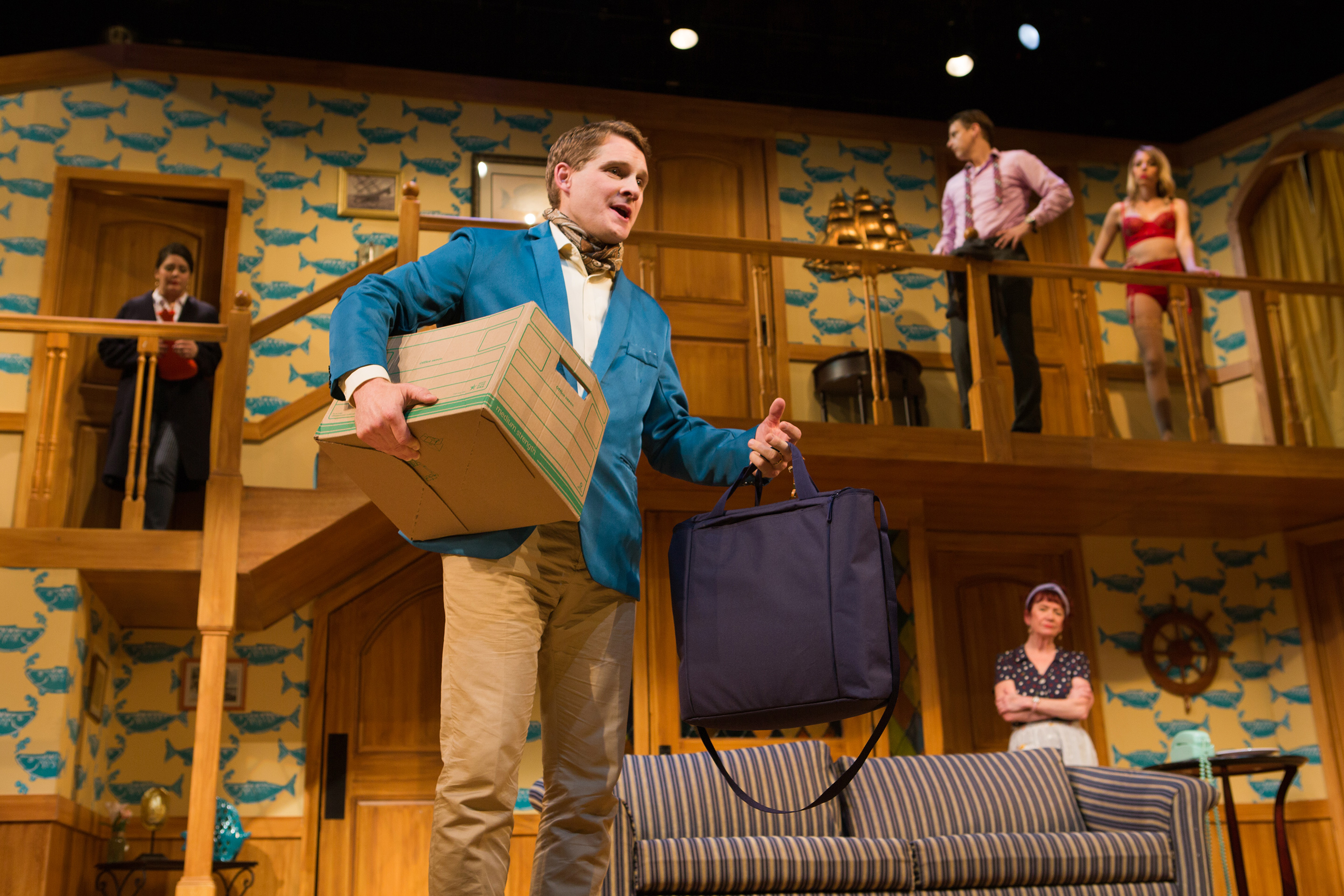 Welcome to the backstage shenanigans that every actor knows and fears. Michael Frayn’s slapstick farce “Noises Off” exposes a British theater company’s tour of their destined-to-flop play. Lighthearted and fun, the parody takes us out of our busy minds, and allows us to forget our troubles for a while as we laugh our face muscles to exhaustion.

The play begins during the dress rehearsal for “Nothing On,” but these British actors can never get it right. Although Lloyd the director (Johnny Moreno) tries with all his might to get everyone on the same page, actors forget their lines, drop their cues, and the set malfunctions. The elaborate two-story set boasts nine slamming doors to help tell the lighthearted, sitcom-style story. The dizzying turquoise-blue fish on the hideous yellow wallpaper bespeak their silly and spectacular problems. And Dotti (Kimberly Richards) keeps on leaving a plate of sardines on the table, so actors get to slip on sardines, while crew members stuff sardines down each other’s shirts. We never tire of those sardines.

Dress rehearsal drags on hiccup after hiccup, including the hilarious drunk senior citizen playing a sober burglar (Richard Louis James). He wobbles around stage, stirring up an uproar of delight every time he interrupts the household.

The second act gives us a view from the rear, backstage on opening night—secrets unravel, people get hurt, and objects are thrown. The actors manage to hit their cues, but actors take their angst and emotions onto the stage. While the cast delivers a confusing and offhanded play-within-the-play, crew members and actors whiz around the stage and pop doors like Scooby Doo cartoon characters.

For the third act, the entire stage set turns around to showcase the company’s final exhausted performance of their tour.  Now, “playing it natural” goes all wrong for the actors. Some of them give up and mope onto the stage muttering their lines, others simply try to tap dance their way out of the ruined performance. The play has flopped so hard that even the curtains refuse to close properly.

“Noises Off” presents the hilarious highlights of all that can go wrong in a self-indulgent, self-involved theater company. Director Susi Damilano brilliantly evokes the crazy and crude lives of thespians unleashed. The movements on stage turn topsy-turvy, and we emerge feeling discombobulated and refreshed. San Francisco Playhouse delivers a ‘feel good’ comedy that banishes the blues. We want to see it over and over again.