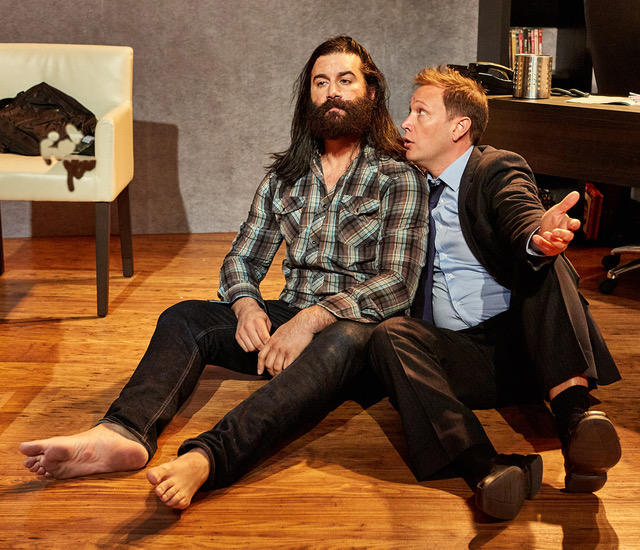 Yussef El Guindi Raises the Stakes on Selling Out

Picture a movie that starts with a Thanksgiving dinner suddenly invaded by a blood-seeking terrorist who tortures Dad with the turkey stuffing. How does an Arab actor psyche up to play that one-dimensional Hollywood stereotype? Is this funny? Yes, if it’s “Jihad Jones and the Kalashnikov Babes,” now running at the Arabian Shakespeare Festival in San Francisco.

Playwright Yussef El Guindi is a prolific Egyptian American, with 16 produced plays, who writes about the immigrant experience and the challenges Arab Americans face. El Guindi explores the worlds of politics, entertainment, and romance. “Jihad Jones” focuses on the Hollywood versions of Arabs stereotyped as murderous villains, since 9/11, and especially in the terrible actions of ISIS.

In “Jihad Jones,” Ashraf (a convincing Tarek Caan) plays a struggling actor, who wants to break into movies. Ashraf is facing his first big break—in a movie with the same name as the play—with an A-list director and a sexy starlet. But can he suppress his Arab loyalties and work in a movie that undermines his beliefs?

What’s a poor Arab actor to do?  “Jihad Jones” is a well-crafted, superbly acted high comedy with a moral dilemma that transcends the current issues of Arab and Muslim stereotypes. El Guindi gives us a moral dilemma to consider: when do you refuse to take orders or jobs? Standing up for your principles is satisfying, but it can lead to issues of survival, too.  “Jihad Jones,” the play, wraps that universal dilemma in a hilarious and thoughtful package.

The stereotypical Barry (a lively Christian Haines), an irritating Hollywood agent, pitches the contract. Ashraf has been out of work for two years, but he is angry about playing a merciless Jihadist and intends to turn down the film. Ashraf counters with his disgust for the terrible terrorist mayhem. Meanwhile, Barry terrorizes Ashraf, with his every gesture mimicking an amoral agent out to exploit the actor.

Ashraf says that script has “enough stereotypes to start a cartoon network.” He calls it: “120 pages of toilet paper.”  Barry claims the film is a satire, that Ashraf is missing the real message. Director William J. Brown III delightfully calibrates the dynamics, with Ashraf playing cool, and hard to get.  Barry announces, “The contract amount slithers over me like a full body massage.”

When Director Julius Steel (a spot-on Sean C. Murphy) and sexy star Cassandra Shapley (a fetching Sydney Schwindt) arrive to audition Ashraf for the film, they find Ashraf at war with himself. Should he accept this hideous role as an over-the-top, vicious terrorist, and reap the big bucks? Does he have a chance with the alluring and flirtatious Shapely? Or, should he stand on his principles and take the high road? Director Brown delivers a fine cast in a balanced, timely, and hilarious comedy.