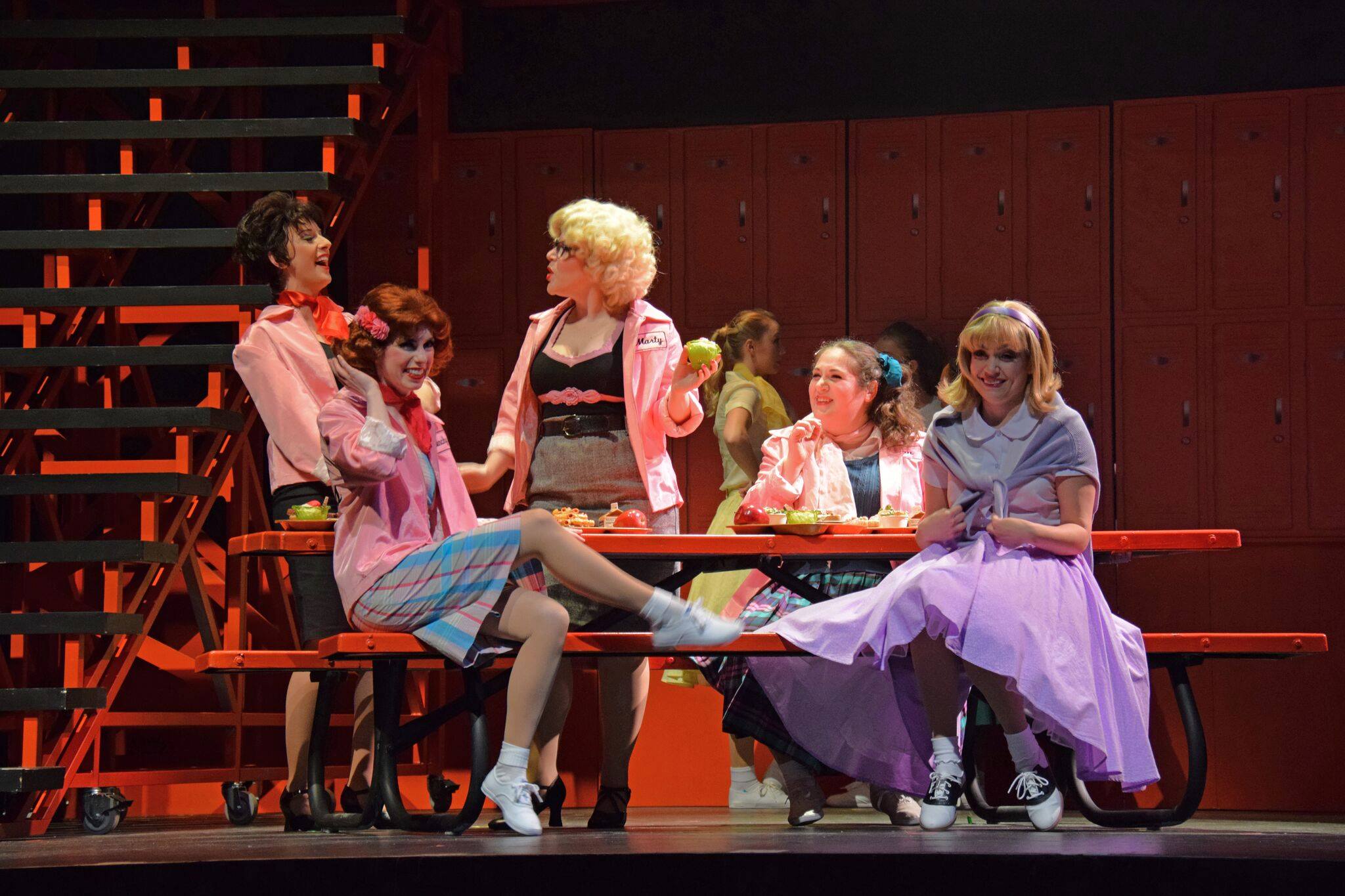 The curtain is down at the Lesher Center of the Arts, and it reads “Rydell” in classic high school letterman font. It’s dress-up night for the opening performance of Contra Costa Musical Theatre’s “Grease.” I see women in poodle-skirts and keds, men dressed in full leather gear—and I am dressed up in pedal pushers and a red satin scarf.

If you’re a fan of musicals, then you’re sure to know “Grease.” You’ve definitely rocked out to “Summer Nights” or “Greased Lighting” and you may have even performed in the show yourself (I played the role of Marty in a high school production).  The rock-n-bop musical became the 1978 film with John Travolta and Olivia Newton-John.  As one of the most produced musicals, it is always difficult to keep the show fresh and exciting, but CCMT is up for the challenge. The musical is directed and choreographed by Christina Lazo, with vocal direction by Cary Litchford.

Most of us know the story: Sandy Dumbrowski (Catherine Bartomeo), the new girl, and Danny Zuko (Massimo Cardarelli), the town’s coolest, badass dude, have a secret summertime romance. When they get back to school, they must fight for their love in the tricky thickets of high school. The demure Sandy hangs with the Pink Ladies—troublemaking girls who smoke and swear. Her sweet Danny leads a gang, the Burger Palace Boys. Can they ever be themselves and love each other? An American dilemma of the 50s.

In CCMT’s production, Catherine Bartomeo plays Sandy convincingly and Massimo Cardarelli refreshingly brings out the romantic side of Danny, masked by his hyper-masculinity. I’ve always had a real problem with the Sandy and Danny romance because they try to change to please each other. Isn’t love about accepting each other?

The leads are supported by a stellar ensemble cast. Some of the stand-out moments come from Doody (Chris Aceves), Sonny (Joren Reyes), and Roger (Matt Haupert), with great chemistry and energy. Doody provides the best male vocals with “Those Magic Changes.” Aceves plays  Doody with adorable sincerity.  I found myself waiting for him to come onstage so I could follow his journey. Andrea Dennison-Laufer as Marty wooes audiences with her sultry rendition of “Freddy my Love,” channeling Marilyn Monroe. Katie Iannitello as the Italian dancer Cha Cha shines in “Hand Jive” and pulls off some of the trickiest dance moves in the show. Nikki Nickerson, as the peppy, square cheerleader Patty, has perfect comedic timing and delivers the most laughs.

The most successful moment comes when the Teen Angel, usually played by an older male, turns out to be a woman:  the fierce and astounding Elecia Tyson. Tyson’s Teen Angel shines as a gospel diva. Tyson’s rendition of “Beauty School Dropout” raises the roof of the Lesher Center, driving the audience wild.

My favorite subplot of “Grease” comes from Kenickie (Michael Doppe) and Rizzo (Mary Kalita), the two rugged and downtrodden teens who find sanctuary in each other’s love. In my favorite number, “There Are Worst Things I Could Do,” Kenickie and Rizzo face a real threat. But, no matter how difficult their love, these two grease balls stay true to their essences.

While most of the show remains relevant to a modern audience, I think “Grease” ends in a dated and sexist way.  Sandy, a smart, sensible girl wants an honest boyfriend and Danny wants to run barefoot through the sand with her. So why does Sandy succumb to peer pressure, ditch her ponytail for a perm, throw on some leather, and decide to turn into a conformist parody? And why is Danny cool with that? Do we want to teach girls to change themselves just to please the boys? I hope not—but there’s a lot of peer (and shopping) pressure out there, still.

CCMT gives us a successful, refreshing take on the classic. But if you’re taking your kids, make sure you remind them that being yourself is just as cool as wearing sexy leather outfits. Though, I’m not going to lie, the leather outfits are pretty damn cool.