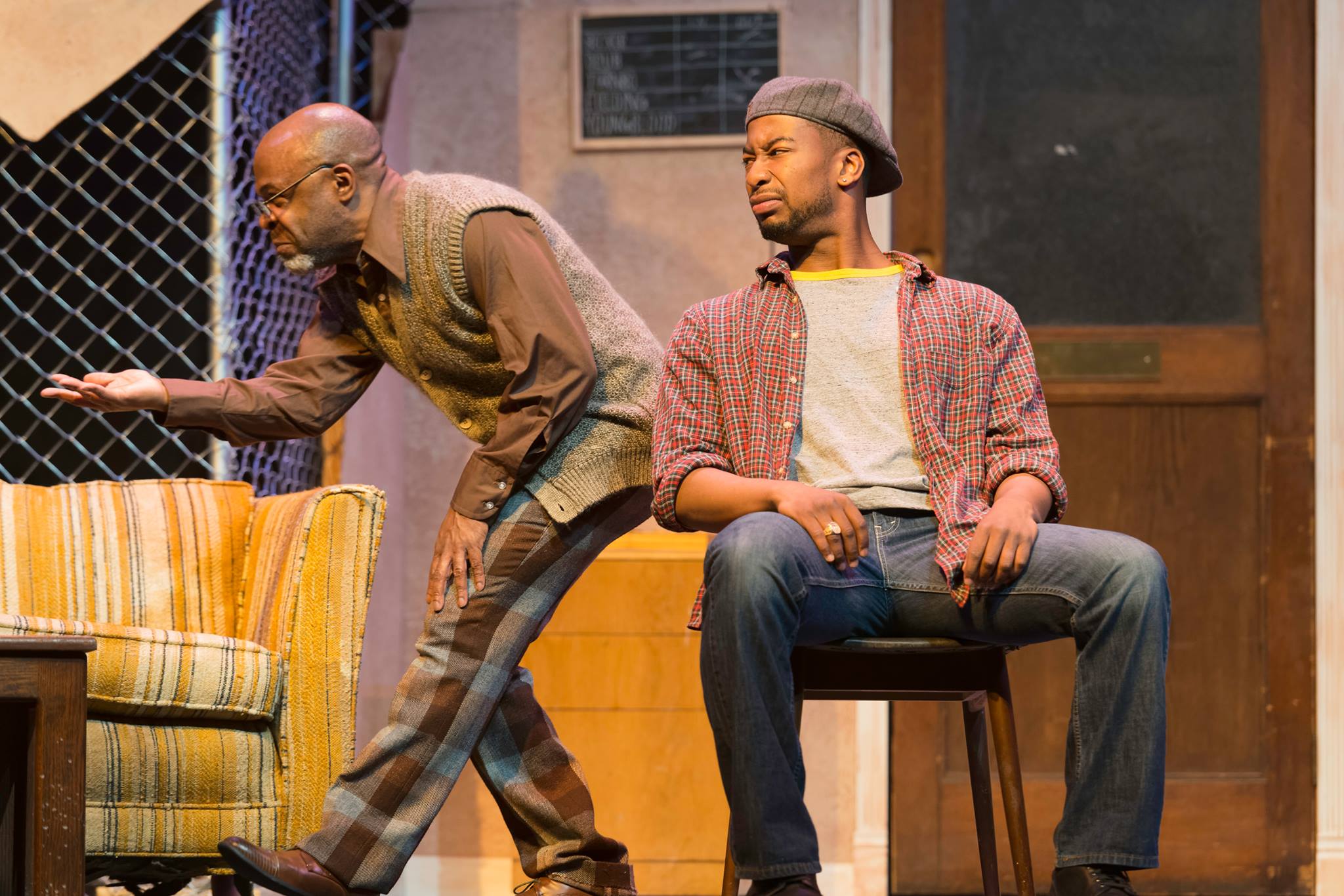 I love a play full of conversation where words flow like poetry, like music. I love a play about regular working people. I love a play alive with fully drawn characters. It is not surprising I had an excellent evening at the African-American Shakespeare Company’s production of August Wilson’s “Jitney,” directed by and starring our own top-flight L. Peter Callender.

An August Wilson play often features a father and son struggling, or a man and woman in love baffling one another, or characters fiercely defining their responsibilities. Wilson always shows us people we thought we had pegged who prove to have unsuspected depths.

Ten of Wilson’s 16 plays make up his American Century Cycle. Each play in the Cycle covers one decade of the working class African American experience in the 20th Century. Two of them, “Fences” and “The Piano Lesson,” won Pulitzer Prizes.

All the action takes place in the dispatch office of a gypsy cab service in 1977, in Pittsburgh’s Hill District. White cab companies won’t service the area, leaving an opportunity for this Black crew to eke out an existence. As they wait in the office for calls, we hear a debate on the relative merits of Sarah Vaughn vs. Lena Horne, see a checkers game between two proud players who don’t like to lose, and we hear a lot of talk about people’s everyday problems. Characters wrestle with a co-worker who drinks on the job, a man with a prison record asks for help finding work, and others seek a place to spend the night.  But far, far deeper struggles gradually emerge.

Becker (a powerful L. Peter Callender), the cab service owner, learns that his son, Booster, will be released from prison—but Becker has never visited his son. And driver Youngblood is suspected by his partner Rena of straying. And gentrification threatens to oust the cab service from their bare bones home.

Multi-talented Director Callender plays a starring role as Becker, who is an astute manager. Becker delicately balances the art of turning a blind eye and occasionally rebuking his opinionated, proud crew. Although Becker is smart and respected, his hidden pain erupts when his son, Booster (a defiant Eric Reid), shows up. Father and son explode, each giving and taking verbal blows that shatter their hearts.

The romantic trials of driver and Vietnam vet Youngblood (an appealing Edward Nevell Ewell) and Rena (a poised Jemier Jenkins) provide a counterpoint. Youngblood, a fiery and outgoing man at work, finds himself well-intentioned but with a bit to learn about life and love in romance. He and Rena make an attractive couple and their mutual misunderstandings provide both tender and comic moments. Rena’s response to Youngblood’s grudging late revelation provides one of the high points of the play.

“Jitney” truly is an ensemble work, with each cab driver offering a bright strand in the quilt:

Driver Doub (a big, mellow Jonathan Smothers) serves as a kind of referee to the often quarrelsome crew. Doub can be blunt, when he advises the youthful Youngblood: “You just have to shake off that ‘White folks is against me’ attitude. Hell, they don’t even know you alive.”

“I don’t know what the world’s coming to,” says driver Turnbo (a cantankerous ShawnJ West), who causes all the havoc that a busybody can conjure. West perfectly portrays Turnbo, an obnoxious contrarian who can never be wrong— in his own eyes.

Fielding (a wistful Trevor Nigel Lawrence) ever at least a little drunk, adrift and often borrowing money, notes: “You don’t always have the kind of life that you dream about.”

Shealy (a genial Fred Pitts), the local numbers man, often works out of the cab office, dresses to the nines—maybe even the eighteens. Flashy and open-hearted, he knows everyone in town. Kudoes to Nikki Anderson-Joy for her exciting costume designs.

Philmore (a friendly Gift Harris), a local doorman, regularly uses the cab service. He offers a universal truism when he needs a ride to his mother’s after being kicked out by his wife: “Mama don’t like to see you comin.’ But she will take you in.”

Kevin August Landesman has designed a set that utterly captures the run-down nature of every cab dispatch station (I speak as a former, if briefly employed, cab driver).  The large window and constantly opening door establishes a connection to the larger community.

Although “Jitney” lacks a strong ending, the play offers an abundance of substance and significance. The fine cast and direction make us want to catch this “Jitney,” before it leaves. Wilson and Callender bring the Black working man’s experience to life in this gem.

Doub, the even-keeled peacekeeper of the crew, is also a vet, from the Korean War. He grew up in a time with even fewer opportunities than Youngblood will know.  Throughout the play, Doub is the voice of reason. At one point, he notes: “Time go along and it come around.”  We leave “Jitney” thinking about Doub’s philosophy. Many of the problems of 1977 still plague America, today. At least we have the genius of August Wilson to help us.

We can act to defend the Arts: