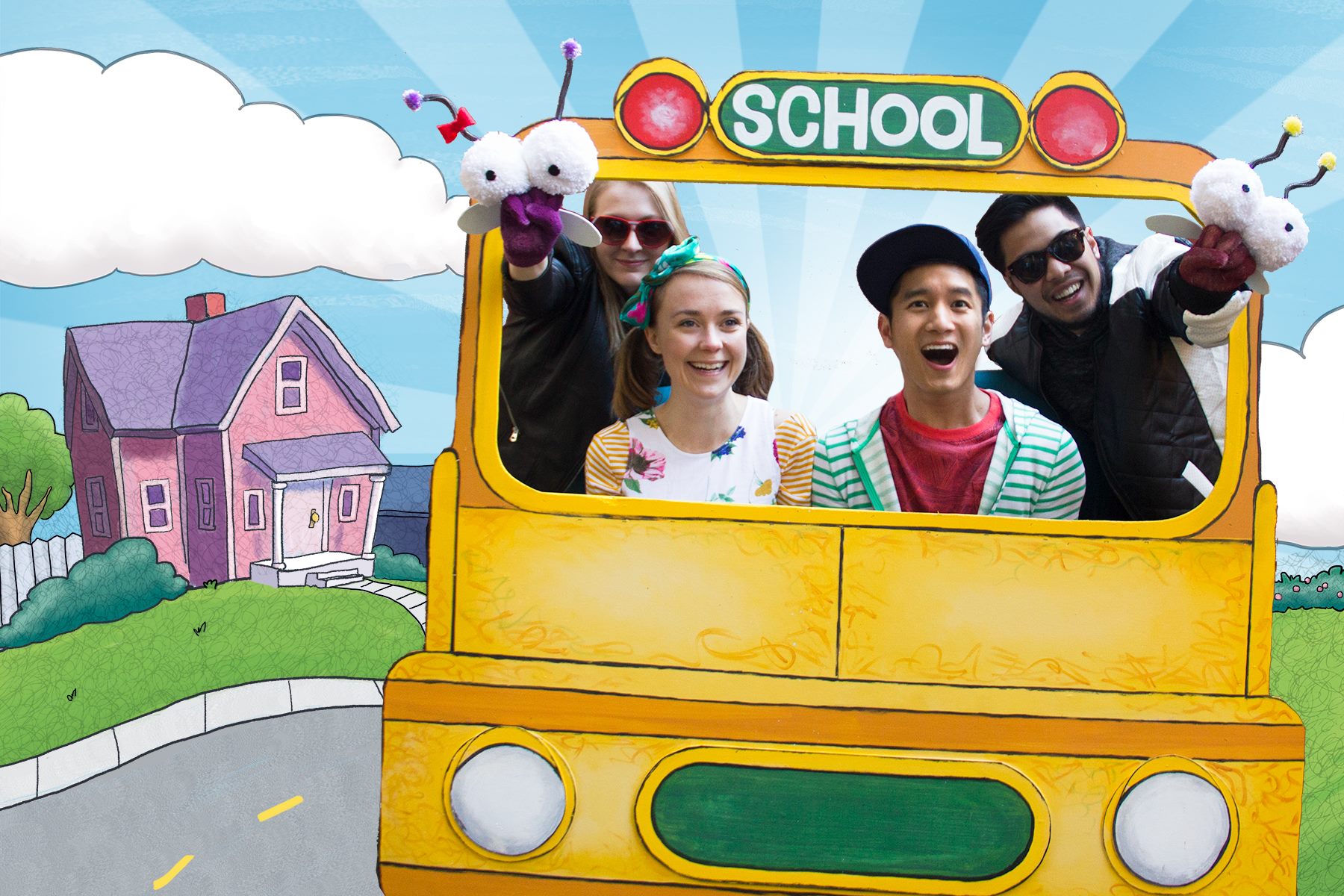 Buzz (Benjamin Nguyen) really wants a pet, but instead of going to the animal shelter, he packs some gadgets into his little red wagon and heads outside. He doesn’t have to go far before running into a creature who can say his name. It’s a fly. He’s Fly Guy to be precise, played by the compelling, athletic, and delightful Dominic Dagdagan. A fast friendship is born.

Buzz doesn’t mind that Fly Guy prefers rotting food, that he does a lot of vomiting, or that most of the world is grossed out by him. But his parents and friends need some convincing. Cue the theme song, which details the many ways in which Fly Guy is amazing: he does math, performs daredevil tricks, and even plays on the football team. This theme song is still in my head, days later.

But life with an amazing fly as a pet is not always a cakewalk, or as Fly Guy would prefer, a garbage walk. Buzz decides to break a promise not to bring Fly Guy to school anymore, and the inventive, enthusiastic lunch lady (Annie Clark) is fired as a result. Then things really spiral out of control when Fly Guy and his newfound friend Fly Girl (the engaging Anne Norland) tag along on a field trip. They travel to a factory in town with a suspicious owner (the inventive, antic Justin DuPuis), a funny villain. As it happens, the factory manufactures a secret sauce that puts flies in mortal danger.

The story unfolds at just the right pace for a musical designed for young audiences. And nearly every song is a small masterpiece, thanks to the composition and performance by Austin Zumbro, the talented writer and singer.  The concepts and word choice are sophisticated enough for parents to be entertained, yet simple enough for kids to enjoy on multiple levels, especially combined with the energetic choreography. The melodies, lyrical syncopation, and beats, especially in the Fly Guy numbers, are spot on, and Zumbro’s renditions are rock solid.

My only complaint with the music is that a few songs are rattled off “Hamilton” style, occasionally too fast for me to make out he’s saying, and too fast for small ears to interpret. But one thing is quite clear: Austin Zumbro’s lyrics are well worth hearing, word for word, as is his dialogue. However, we could do wthout one song in which Buzz’s Mom and Dad express their support for him, dancing around the kitchen. It’s the one bit of fat that could be trimmed from an otherwise compact, fun-filled adventure. In fact, “Fly Guy” could even indulge in elaboration in spots. We want more of that dramatic entry into the factory with the homemade drum costumes, and kids would love more of the hysterical factory chase scene. I’ll bet the kids could take even more of “Fly Guy.”

The sets and props are a delight, the acting is strong, and the singing shines through. I highly recommend this production, which is designed for children ages four and up, but which even younger kids with the right temperament will enjoy. My 17-month-old, Itasca, was clapping and bopping to the music, watching almost all the action, albeit upside-down at certain points.

“Yeah, but what’s the bigger takeaway?” My husband asked after the show. “Fly Guy” touches on many themes: Embrace and celebrate what is different, small lies can have big consequences, never blindly follow orders. There isn’t an overarching message, no dramatic focus that builds to a single epiphany. However, I don’t consider that a problem. There’s something nice about a children’s production that relies on subtlety instead of contrived lessons.

There’s something comforting about a play where the parents are not the bad guys, where bullies are easily won over, and where silly conquers evil. Sometimes a pure escape from life as we know it is exactly what we crave in a trip to the theater. And that is what Bay Area Children’s Theatre delivers with this production: an hour and a half’s escape into a bright, strange world where flies rap, where villains sing about their woes to hilarious effect, and parents happily save rotting food for the family pet, as long as he eats it outside.

“Fly Guy, the Musical,” written & performed by Austin Zumbro, directed by Nina Meehan, at Freight and Salvage in Berkeley, through Sunday, May 7, 2017. “Fly Guy” moves to DVPAC, in San Ramon, May 13-14; then to Children’s Creativity Museum Theater, in San Francisco, May 20 to June 11, 2017.  Info: bactheatre.org