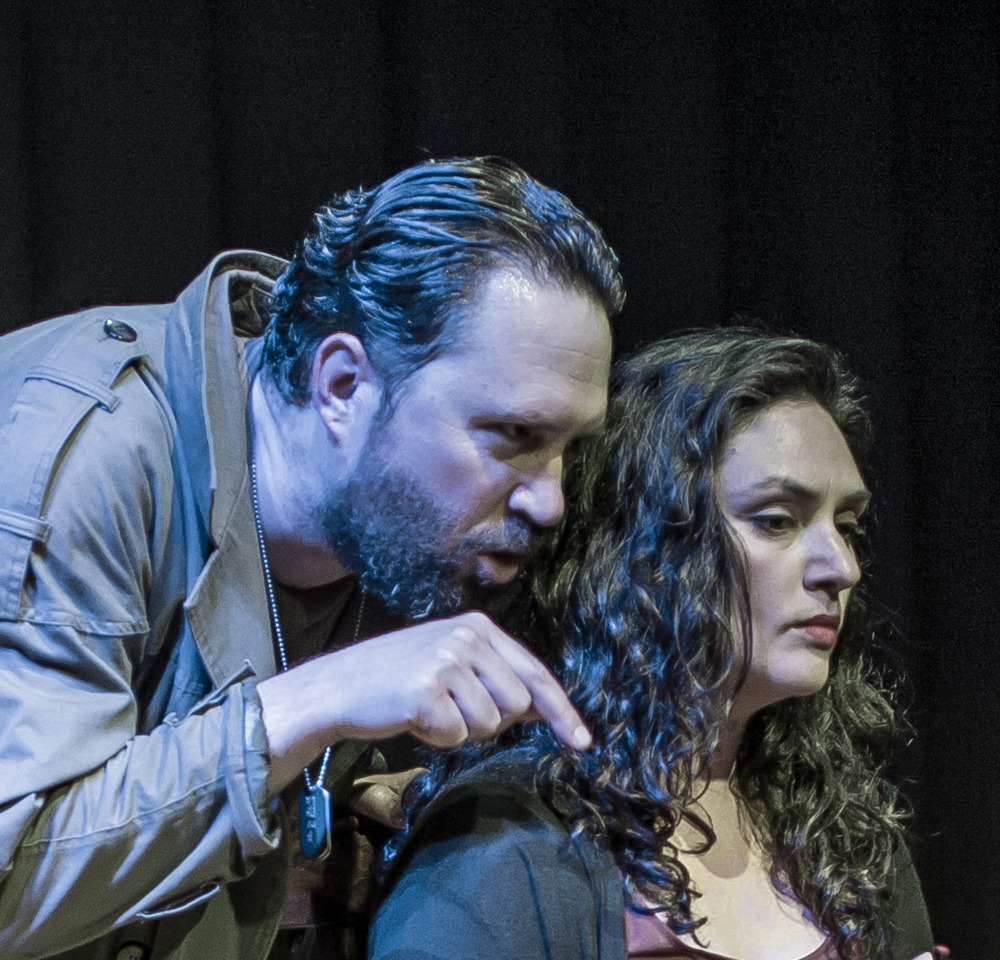 Shakespeare Remains All Too Timely

An ensemble of 13 actors plays Shakespeare’s tragedy of ambition and tyranny with a black wall, three wooden crates, and a handful of props. Rather than a conventional stage, the audience is pressed up against the action, with most of it performed on the floor immediately before us. A stage without sets requires the audience to buy into an imagined world, to participate. The immediacy of the actors’ performances and Shakespeare’s words lead us in. It was my first experience with this kind of raw black box staging; I am now a fan.

The door opens only a few minutes before the play commences. We enter to find the actors standing in frozen poses in front of our seats: tired soldiers, wounded soldiers, a Red Cross nurse (in white apron with a bloody handprint), and a lone civilian. Then, we hear the barrage of bombs and the light changes. The actors begin reacting to the blasts. Many die.

When that hurlyburly’s done, a few who did not die become grave robbers, who then become the weird sisters. The three Witches prophesize greatness for Macbeth (a charismatic Michael Barr) and Banquo (a steadfast Eileen Fisher):  Macbeth will have promotion and a crown, Banquo will father a line of kings. Macbeth’s lethal ambition is ignited, and we’re off.

Small things carry a lot of weight when we are right on top of the action  In the front row, I was only inches away from that bloody handprint on the nurse’s apron. Lady Macbeth (the ardent Melanie Bandera-Hess) prepares her castle for the arrival of King Duncan (the noble Aeron Macintyre) by sliding her bare feet into heels, changing her into a regal presence.

Theatre Lunatico needs no grand dining room for the banquet scene where Macbeth encounters Banquo’s Ghost. Rather than a scene featuring shocked courtiers responding to Macbeth’s agitation, Director Taylor offers a close-in confrontation between murderer and victim, followed by the anxious Lady Macbeth trying to manage a tormented husband.

Stepped in so far that, should I wade no more,

I’ve always found those some of the coldest words ever spoken, but thrown out by a man standing a foot away, adds extra ice.

When Macbeth returns from war, the husband and wife convince us of their deep love, making the crumbling of their relationship—as Macbeth begins to plot alone to save his crown—seem as painful as their descent into madness. The intensity of their disintegration highlights the effects of guilt on the blood-drenched couple.

This Lady Macbeth is a passionate woman, a fiercely single-minded aristocrat who makes dire decisions. Bandera-Hess portrays her as a disconsolate woman responding to a lost child. Lady Macbeth is also dealing with a husband suffering from war induced PTSD.

MacDuff (gruff Scott Ragle) reminds me uncannily of a blunt soldier I once knew. Ragle’s Macduff is stirring as lamenting father and revenge seeker. Shoresh Alaudini as a Witch, the Porter, and Ross, is consistently compelling. Alaudini’s Porter at the gate amply supplies the humor and presence of the Common People in a much needed interlude in this violent war-time tragedy.

Eileen Fisher plays Banquo in a gender switch. When Fisher returns as Banquo’s Ghost, her eyes mesmerize us. The image of Shawn Oda as a Witch striding about, picking up cigarette butts, and stealing from dead bodies has stayed in my mind for days.

Theatre Lunatico’s website draws parallels between Macbeth’s thirst for power and today’s rule by billionaires and military in the U.S., focusing on tyranny and corruption. Although we are far from  the evils of medieval Scotland or World War I, we let out a collective gasp when MacDuff states:

I think our country sinks beneath the yoke.

It weeps, it bleeds, and each new day a gash

Shakespeare survives because the lines continue to ring true. Certainly Macbeth—like tyranny and unnecessary war—lives on and on.

Sound and light become powerful cues with a bare bones stage, key to revealing mood, time and transition.  The roar of war is potent but so are the actor-provided sounds in the form of ominous group humming behind the witches and the stamping of boots to represent the armies.

If you have never experienced stripped down theater, take this opportunity to embrace a deeper bond with these powerful actors, and be swept away. Theatre Lunatico gives us the full tale, full of power.  I recommend the front row. I like it raw.

We must act to defend the Arts: