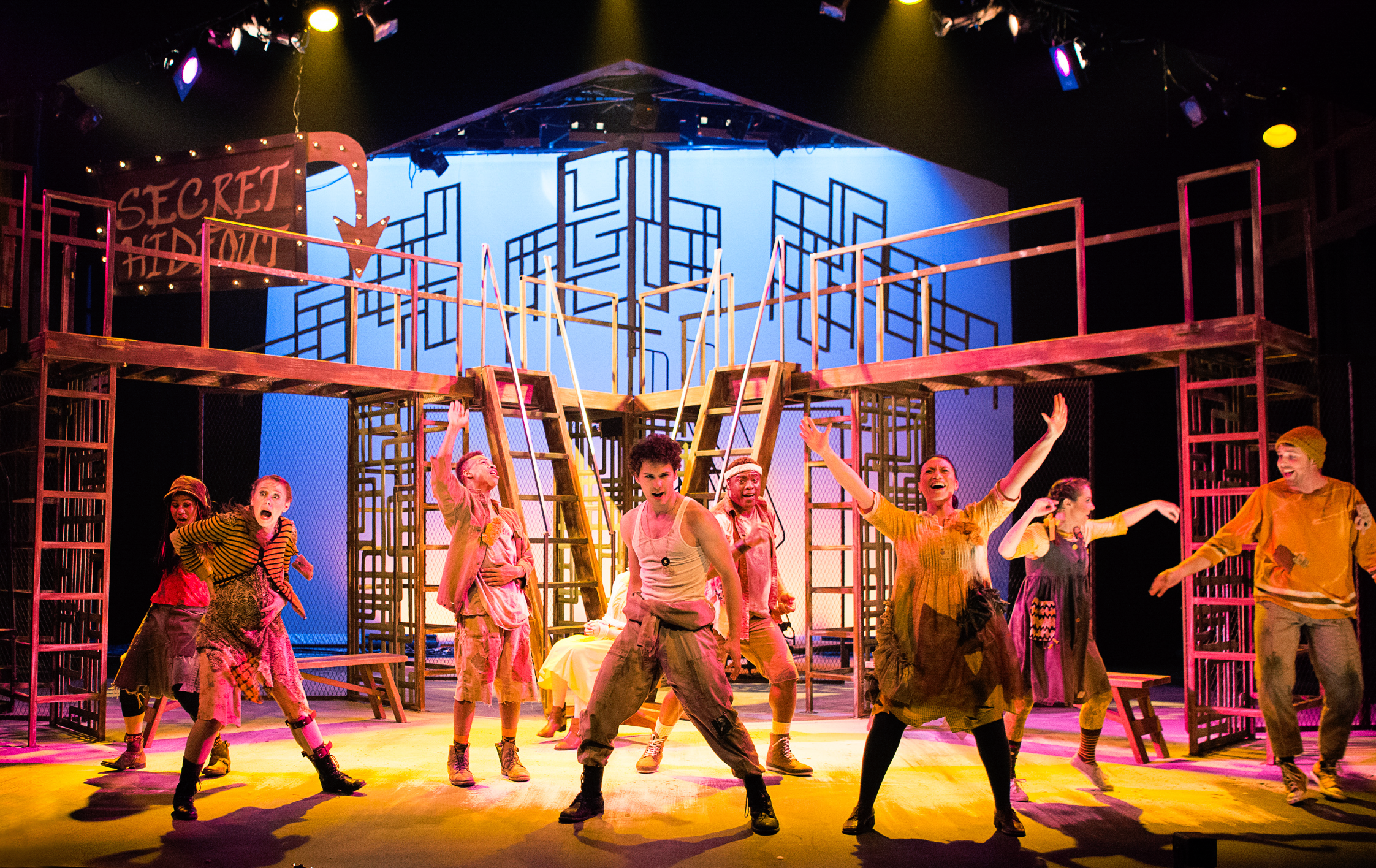 Imagine a world where water is in short supply, where environmental funding is cut, where the world is run by a tyrannical big-business tycoon, and where corrupt policemen unfairly target citizens. No, I’m not talking about the U.S., today, I’m talking about “Urinetown: The Musical,” a superb show at Berkeley Playhouse, directed by Danny Cozart.

“Urinetown” is a smash hit with catchy musical numbers and an enchanting  cast. “Urinetown: The Musical” is socially and politically relevant, environmentally aware, and the show pokes fun at “Lez Mis” and “Fiddler on the Roof,” to boot.

Greg Kotis (book) and Mark Hollman (music) take us to a future where a company called UGC (Urine Good Company) has seized control of the city and now forces people to pay to pee. As usual, the divide between the rich and poor is stark. Those who refuse to follow the rules are sent straight to Urinetown—and you can never come back from Urinetown.  When a young custodian, Bobby Strong, decides to follow his heart and start an uprising, the town breaks into chaos. Narrator and Officer Lockstock (a brawny and commanding Matt Davis) tells Little Sally, a poor, witty little girl (Brittney Monroe) that “this isn’t a happy musical.”  But it sure is a lot of fun!

We  learn about of the predicament of the poor in the song “It’s a Privilege to Pee,” sung by  Lead Custodian Penelope Pennywise (Jessica Coker). Coker’s powerhouse voice recently graced  the Plant in “Little Shop of Horrors” at Ray of Light Theater. She nails it, again, as Pennywise.

Then we meet the Caldwells:  Mr. Caldwell (Paul Plain), the evil owner of UGC, and his daughter Hope (Andrea Love), the recent graduate of the Most Expensive University in the World. Love gives a hilarious and strong performance as she transitions from a naive fax/copy girl into a valiant leader when she falls in love with our hero, Bobby Strong.

Nikita Burshteyn plays Bobby Strong, the strapping rebel. Burshteyn performs at Broadway caliber; stunning us with his beautiful tenor voice and wonderful comedic timing. Burshteyn’s performance is near perfection, and he makes the show for me.

The ensemble doubles  as the rich and the poor citizens, brilliantly performing choreographer Allison Paraiso’s dance numbers, like “Snuff that Girl” and “We’re Not Sorry.” Brian Watson’s set creates  a great grimy, dystopian world for the show.  Costumes designed by Ellen Howes pop with yellow—making it hard to forget the central crisis of “Urinetown.”