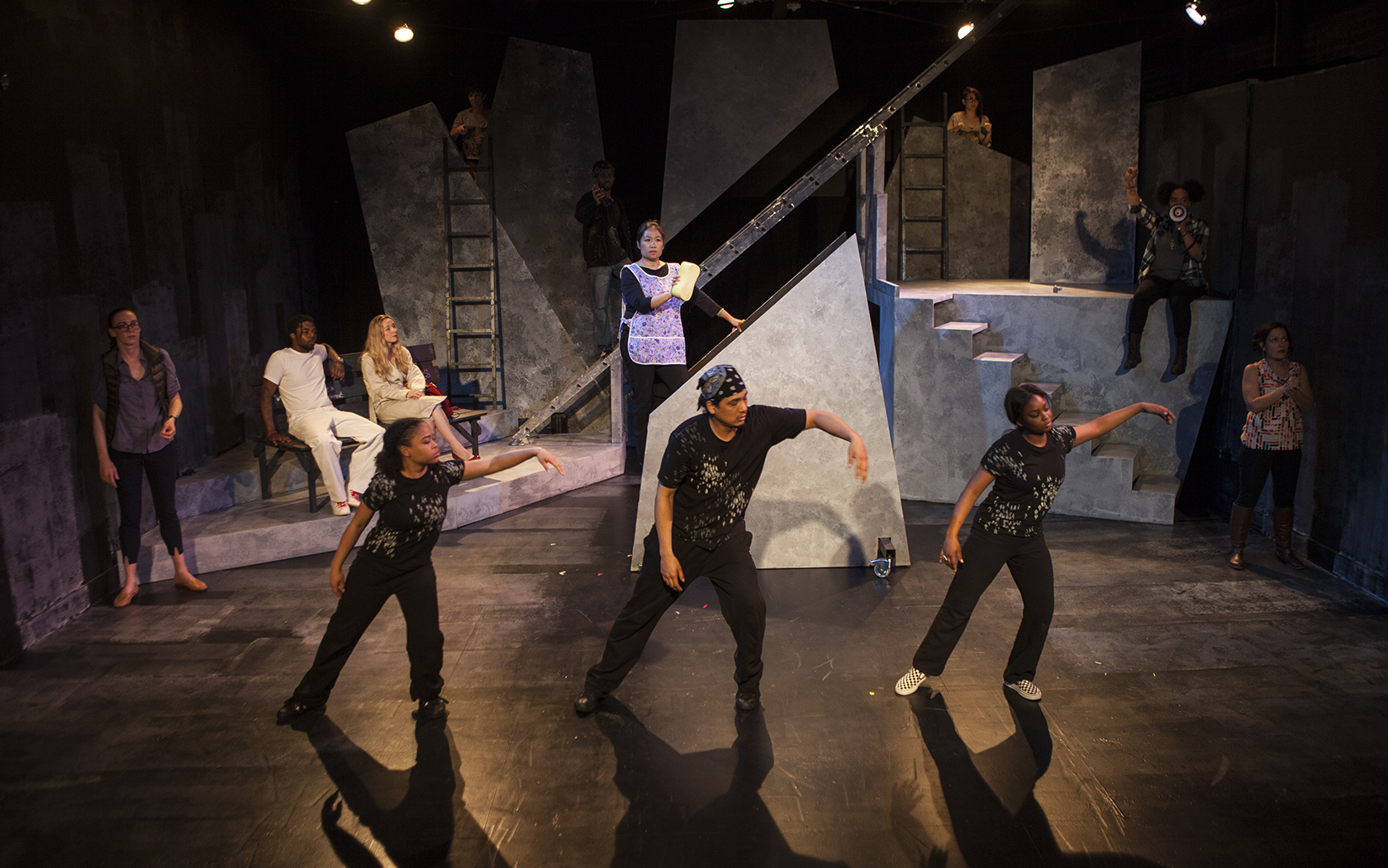 “Overnight,” a new play by Oakland’s Flight Deck, thrusts “the now” right in your face.  The Flight Deck’s groundbreaking reflection of Oakland is just what the doctor ordered. “Overnight,” conceived by Anna Shneiderman, gives us a glimpse into a world where buildings rise up in one night, where a cup of coffee costs $4.00, and smart phones or “how your ass looks” occupies most of our alienated attention. “Overnight” ridicules the insurmountable surges of “development” which are displacing OakTown’s diversity.

In the role of creative producer, Ragged Wing Co-Founder Shneiderman has invited each company to create one act, using the premise of a high-rise building magically appearing overnight:

Theater Aluminous brings us “Talk to Me,” by Sango Tajima, directed by Michael French.

The leading protagonist of “Overnight” is a new corporate building, which appears “overnight,” without anyone noticing. To us, a massive building rising overnight seems highly unlikely. In hindsight, the emergence of a grand building in the middle of Oakland, without our noticing, appears quite possible. After all, we are probably moving so fast, looking down at the iPhone, that we wouldn’t notice. Then one day, by chance, when we happen to look up, suddenly there’s an immense incongruous structure.

U.S. capitalism is creating its own version of Magical Realism. Western banking and financial trickery, which brought us the Crash of 2008, still distorts everyday reality.

In “Talk to Me,” Sango Tajima presents a young African American man named Turtle (Imari Anderson)—because he keeps his home on his back. He fights with and then, unexpectedly bonds with Lian (Lily Tung Crystal), a Chinese immigrant woman.

Although Turtle and Lian come from different sides of the world, they are each alone. Both are displaced in the same place: After Lian fell for the so-called American Dream she discovers that “America is hard, not a dream.” Turtle has been priced out and evicted from his reasonably priced apartment. Gentrification in Oakland is an epidemic of land grab by high-end “developers.”

In “Manifest,” Addie Ulrey features the lanky, red headed “young professional” Alex (Fenner) getting coffee with another young victim of gentrification, businesswoman Ava (Venus Morris). The two pretend that their interaction is normal; that they are catching up, simply, and enjoying each other’s company. But this is only a facade, which we see, after a good dose of hypocrisy and satire.

When Ava is interrupted by notifications on her phone every few seconds, we feel Alex’s guilt  for spending so much money on designer coffee: “But the coffee is so good,” Alex rationalizes. Alex dumps a bag full of $4.00 a cup coffee on the floor right in front of us, and our jaw drops. How many of us are guilty of indulging in false fancy goods?

In the background, two capitalist millennial cronies (Emmy Pierce & Mary Matabor) stand behind the bar at “Manifest Destiny,” the new Utopian coffee shop. Sprouted from the ashes of George’s neighborhood cafe, we feel the loss of “what was.” The Occupy Movement died, but the young and privileged are back to conquer, coasting through life, checking their Instagrams. The play helps us laugh out loud at self-delusion and downright selfishness.

The last installment of “Overnight,” titled “Ticky, Ticky. Boom!” written and directed by Ayodele Nzinga brings the play full circle. Dressed in white robes, playing the part of God and his apostle, “Upper” (Reginald Wilkins) and “Under” (Stanley Hunt) confront the young blonde bombshell Becky (Megan Lipari).  They interrogate her about why the city has gotten so damned cold. Although the first two acts use satirical comedy and jarring irony to depict Oakland’s trajectory, this closing ceremony poses the question loud and clear: What is our part in the gentrification of Oakland, and how can we change that?

We are a fly on the wall in a world that seems far too familiar. In The Flight Deck’s Oakland, life moves too fast for love, and chic young hipsters rule the roost. A city once vibrant with life is losing the long battle to the concrete cathedrals of capitalism.  “Overnight” makes us think about what we can do to change that history.

By the time the production closes, and the actors line up before us, bowing in glee, we can feel at “one” with them. “Overnight” is real, and makes us rethink our everyday actions.