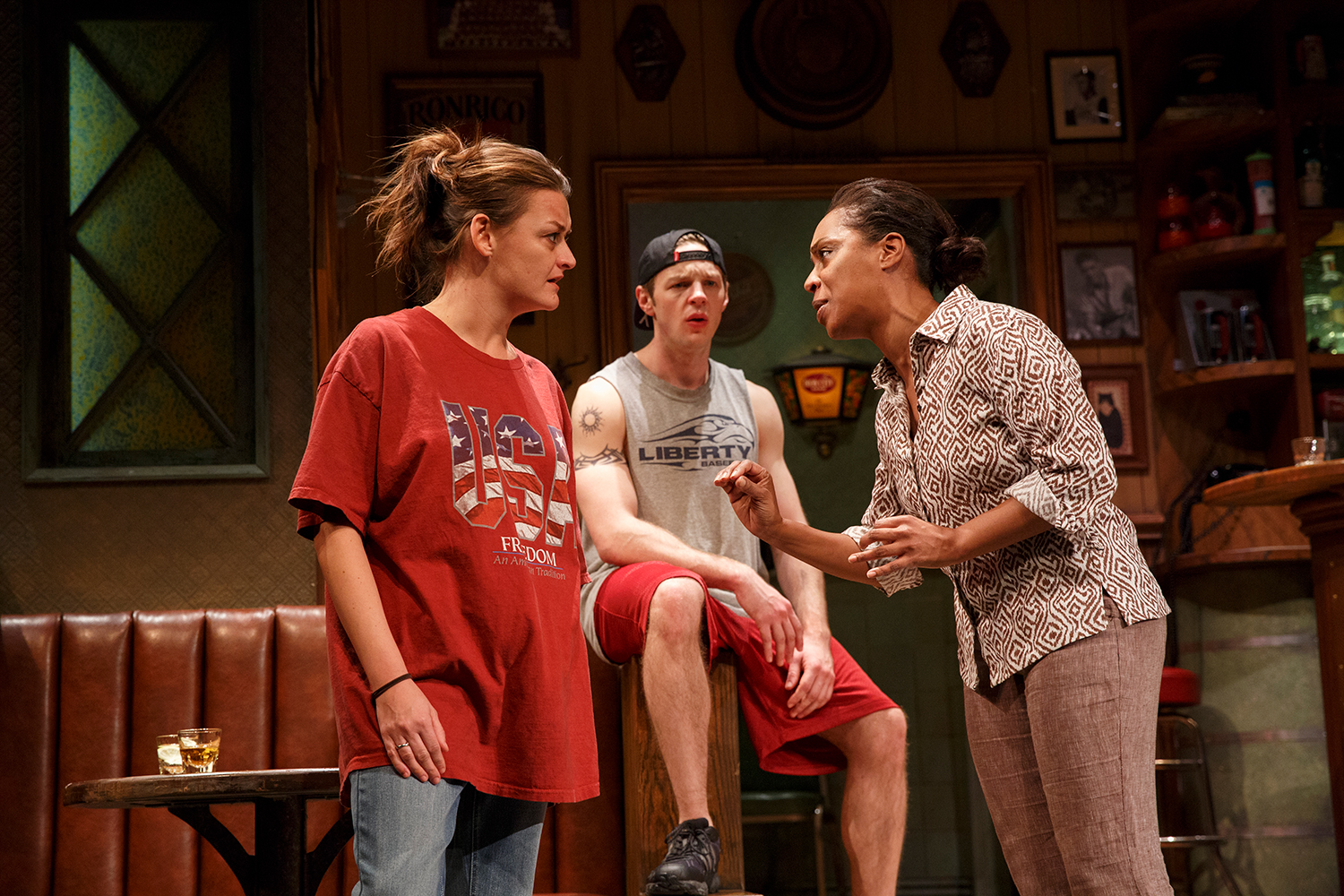 “Sweat” goes a long way to explain the rise of Donald Trump. Lynn Nottage 2017 Pulitzer Prize-wining play gives vital life to American steel workers who work hard and play by the rules. But they are squeezed out of their jobs and then ignored.  When their jobs are threatened and then vanish, they respond with anger. Now running on Broadway, “Sweat” sheds light on how and why Trump’s politics of hate resonate so strongly with out of work Americans.

“Sweat,” directed by Kate Whoriskey, which started at The Public Theater in October, gives voice to the heart and soul of American factory workers. We witness the devastation of their world between 2000 and 2008, as the steel factories of Reading, Pennsylvania are dying, and jobs are moved abroad for cheaper labor.  De-industrialization is ravaging the “Rust Belt” and no one cares what is happening to these people.

Nottage bases the play on her interviews with factory workers in Reading, a once-thriving industrial town.  After the closing of the factories, Reading became the most economically depressed city in the country. Her research with the citizens yields rich fruit. In “Sweat,” her second Pulitzer Prize-winning and Tony nominated play, she strategically explores the breakdown of the city and the crumbling of families and friendships as workers’ jobs and their way of life disappear.

The play is mostly set in an old-fashioned and welcoming bar, designed by John Lee Beatty, with carved wood and mirrors, evoking happier times. The small group of regulars, good friends, Tracey (a feisty Johanna Day) and Cynthia (a thoughtful Michelle Wilson) are bound together by years of shared sweat and blistering hard work in the steel tubing factory. Tracey who is white and Cynthia who is black are entering middle age, having worked together on the factory floor for over 20 years.  Both women are still attractive, full of life, and sexy in their party clothes. They drink hard and gossip at the bar, their home away from home.

The changing times will take a bitter toll on Tracey and Cynthia’s friendship.  Jessie (Alison Wright), slumps in a stupor in a booth, burned out from her life on the factory floor. She once imagined traveling to exotic places.

At the center of the group, Stan (a warm-hearted James Colby) presides as the down to earth bartender. Stan worked at the plant for 28 years before being injured. He warns them all about “NAFTA bullshit.” In a disturbing encounter, the Colombian bar boy, Oscar (an intriguing Carlo Alban) reveals that the factory is hiring Spanish temps at much lower pay. Oscar plays a pivotal role in the desperate story.

Friends are pitted against one another, with race and class on full display. The actors powerfully embody the anger and the oppression of workers at the end of their rope. Because the unions have been eviscerated, the workers have no power against management. They can only turn their rage and frustration toward each other. Their lives are falling apart.

As their economic security disappears, the bar, once a friendly gathering place, erupts in hate. Fear and mistrust flourish in the “brave new world” of displaced American workers. Nottage wrote this play before the election—a reminder of a harsh reality that many of us ignored last year.

Although I am fortunate not to be in such dire financial straits as Tracey and Cynthia, but like them, my way of life, our democracy, is now being threatened as never before.  “Sweat” warns us that we have to embrace our differences, find common ground, and fight back against exploitation, bigotry, and greed.