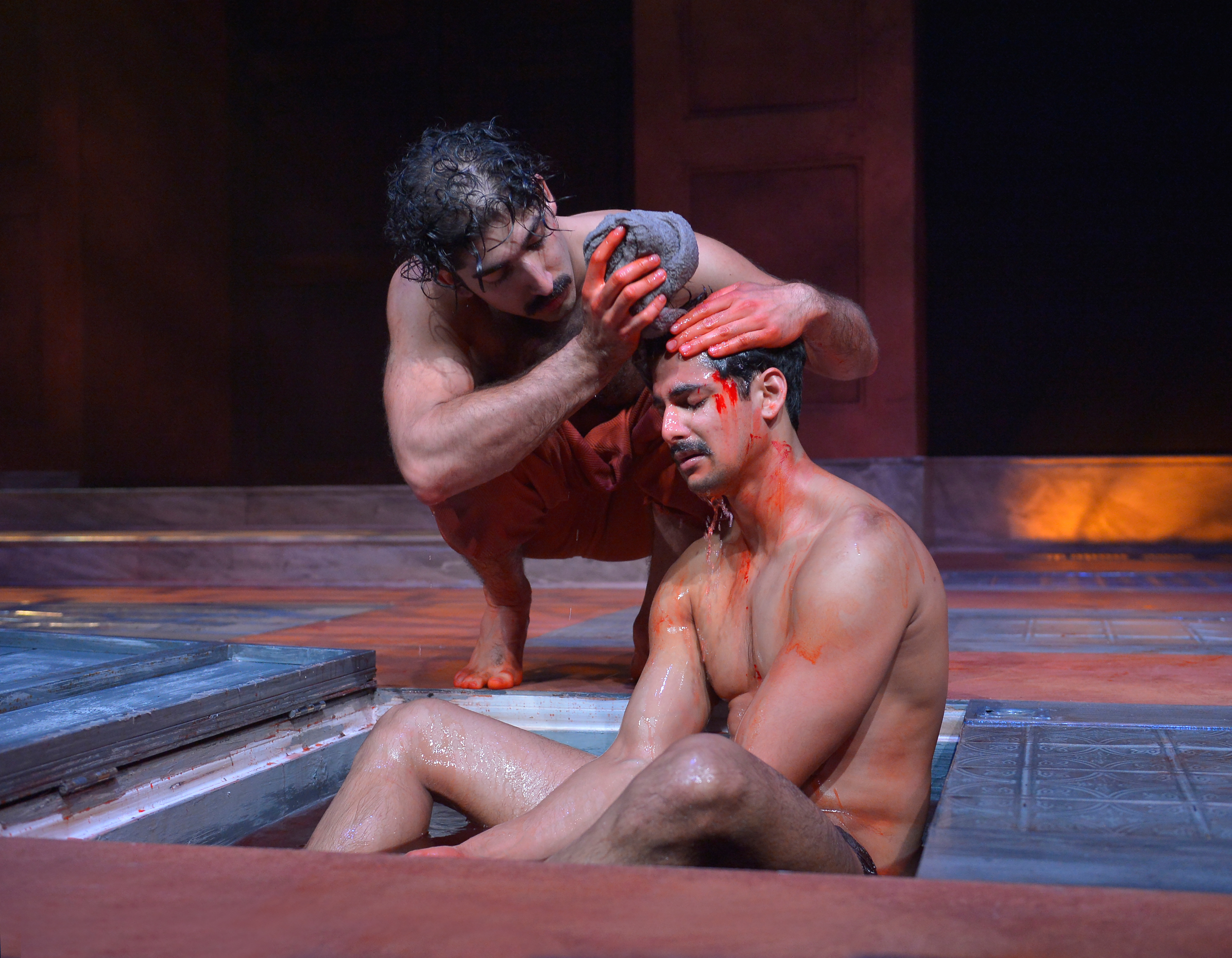 Rajiv Josef has written a mind-boggling play that flows lyrically from a powerful writer, winning the 2016 Obie Award for Best Off-Broadway new play. It’s hard to resist Josef’s ideas and images, as they wash over the stage from the stately Indian gate by Annie Smart that dominates the set. Beyond the gate, the construction of a world famous monument is about to be unveiled.

Behind the massive wooden gate, the all-powerful Shah Jaheen employed 20,000 world-class artisans to build a beautiful monument to his dead wife: it’s the Taj Mahal, an memorial to love. But what does it take to build such a magnificent temple—the Shah has thousands at his bidding, but we see only two at the bottom of the ruling class in his Empire—two guards, foot soldiers in a cruel army—in 1648, in Agra, India.

The two young guards, in stunning blue robes, stand outside the great gate, which separates them from the secretive construction of the Taj Mahal. They are not allowed to turn around and look—even on the dawn of the day of the completion of the temple, after sixteen years of building. We are startled by the beautiful dawn created by Mike Post, and by the witty banter between the the two actors. They cannot shut up—the two boyhood friends with opposing personalities. They are handsome, charming, and funny. But they react oppositely to the horrific political life around them.

The taller soldier Humayun (a striking Jason Kapoor), stands stiffly with scimitar poised. He follows the rules, because his father is a high official. He tells us how his authoritarian father imitates the Shah— denigrating his son, telling him he will never rise in the service. Hence, Humayun lacks confidence, is afraid of every sound, and stands silently, as ordered. He follows orders. He lives in fear, takes no risks, does what he’s told. Humayun suffers and submits. A perfect worker bee.

But his boyhood friend, Babur (the lively Rushi Kota), the other guard in the same turban and robe, is the yin to his yang. Babur is the opposite: he is always late, forgets his turban or his scimitar. He keeps breaking the military silence: he fidgets he imagines flying carpets and rocket ships. He listens to the birds in the jungle, and dreams of guarding the Shah’s harem. He won’t shut up.

Babur babbles like a surfer dude with a vivid imagination. He loves his conservative buddy, Humayun, but he cannot help taunting and teasing his friend with ideas and rebellion against authority. They sound like the two bums in “Waiting for Godot.” They, too, are waiting for liberation.

Once, years ago they built a platform of smooth sandalwood in the jungle and hid out together for a nigh.They were just boys, but they discovered revolt and nature.  They have loved each other since that day, opposite as they are: a fearful conservative and a dreamy radical—trapped in their slavish jobs as guards at the Taj.  What could possibly go wrong?

Something goes terribly wrong. The two friends are forced into a terrible travesty of justice; they become instruments of the Shah’s and Humayun’s father’s tyranny. The whimsical and brutal regime takes its toll on our two foot soldiers. Babur is destroyed by his participation in horror, a victim of Post Traumatic Stress, like U.S. soldiers returning from Iraq, Afhanistan, Syria, Libya. They are commanded to perform hideous tasks on pain of death. Babur exclaims: “I have killed Beauty!” And we feel his pain. They are the instruments of bloody attacks on the 20,000 talented artisans who have created all that Beauty. They are both perpetrators and victims of an apocalyptic attack on Truth and Beauty.

Babur falls apart—he takes his role in the horror much harder than his friend, who undresses him and washes his naked body of the flowing blood.

On opening night, these interesting actors still needed to connect with one another. The pace of their friendship needs to go more briskly. The intense script cries out for more speed, more intimacy, and more comaradery between these two buds. Picking up the pace of the play, the scene changes, and the bromance will help a lot.

Nevertheless, “Guards at the Taj” offers powerful, witty, and existential themes. When Babur plots an escape on a magical carpet, or Hamayun tries to match him with a laughable “portable hole,” we are in the realm of philosophy and magic. Their differences and devotion to each other cannot survive in a terrible and familiar tyranny. Humayun wants to submit to the Divine Leader, while Babur has dreams of revolution—the very dilemma of the Nazi hierarchy, of all hierarchies, ultimately?

In the present world of Trump’s tyrannical edicts and delusional ideas of history, the confrontation of addled ruler and suffering soldiers sounds all too familiar. Watch out for NPR. Watch out for your  hands.