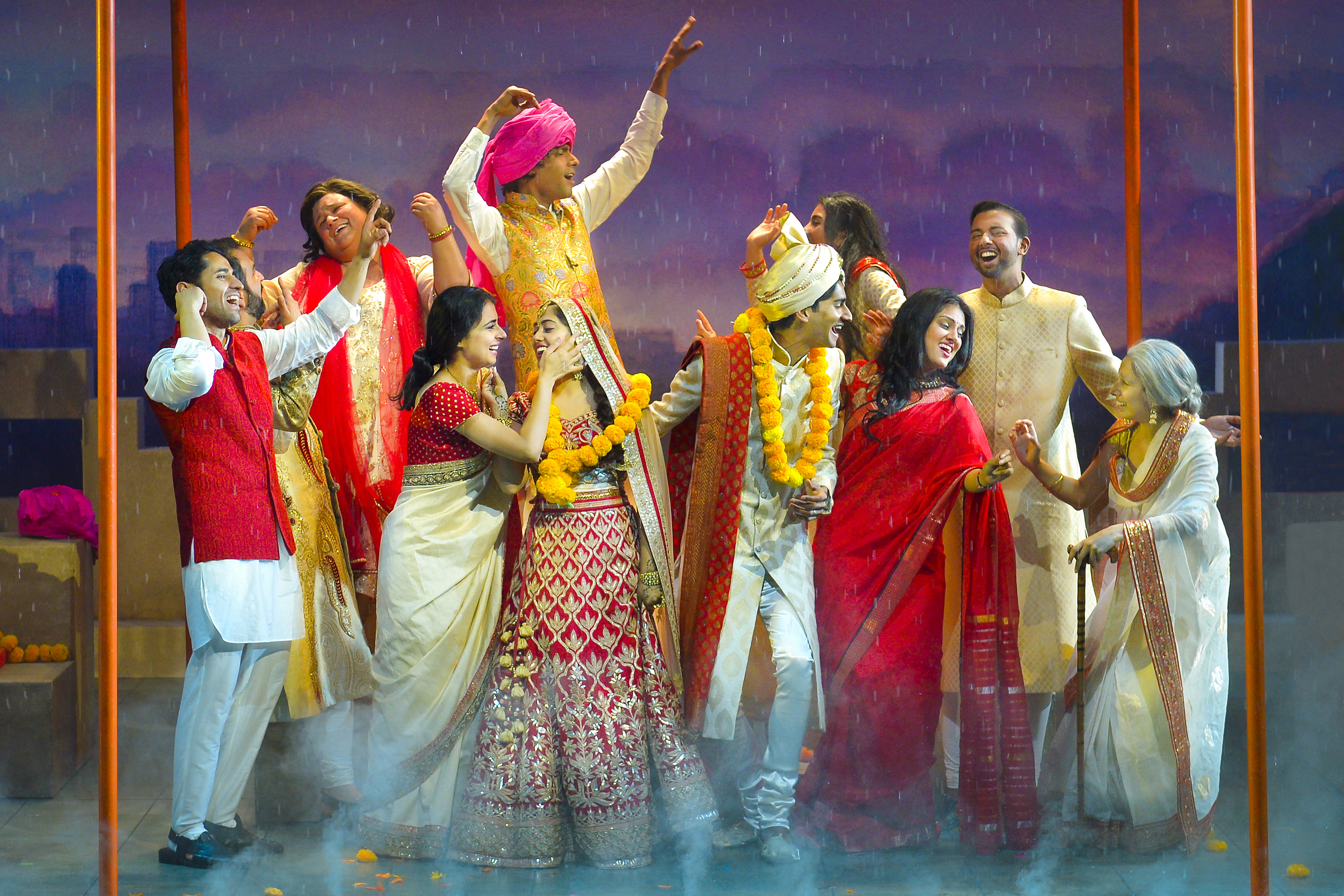 “Monsoon Wedding” depicts a well-to-do Dehli family’s frenzied preparations for the elaborate arranged marriage of their daughter to an Indian American boy from New Jersey. The boisterous wedding preparations are besieged by crises, but each is overcome by the unrestrained happiness of Bollywood song and dance, based on Director Mira Nair’s 2001 movie of the same name.

The vivacious cast sings and dances in a constant swirl of activity and mirth. We are dazzled by the beautiful costumes and settings,  with the bold use of oranges, reds, blues in flowing silks and saris—and the lavish strings and showers of bright orange marigolds. Thanks to Designer Mikiko Suzuki Macadams, the lavish Indian wedding décor—coupled with Donald Holder’s vibrant lighting—surprises and mesmerizes us, in every spectacular scene.

One such clash is the arranged marriage between the rebellious Aditi Verma (enchanting Kuhoo Verma) and the tall and striking American Hemant Rai (outstanding baritone Michael Maliakel).

The bride’s cousin, Ria Verma (engaging, dynamic Sharvari Deshpande), dresses in muted tones and lives with the family. She is a social worker who spends her time with the common people, unlike her cousin’s flashier life. Deshpande brings humanity and warmth, hiding a deep secret, adding a thread of conflict and drama to this joyous musical.

The romance of the wedding planner PK Dubey (the irrepressible Namit Das) with the Verma’s family maid, Alice (witty, romantic Anisha Nagarajan) provides a touching, sweet sub-plot. When Alice appears as the Goddess of Light on top of a brilliant circular stair, she restores the electricity for a frantic Dubey—a magical moment.

After the comical Dubey discovers that he–and his mother–are tangled in conflicts between Hindi, Muslim, and Christian religions, we see him riding a faux-horse, chasing Alice, who is riding on a train. In the marvelous horse and train scene, Alice sits amidst a sea of passengers who are all dressed in bright orange saris and robes. in the backdrop lovely projections of smoke rise from the rushing train.

The passing scenery magically appears behind them in soft orange tones—a masterpiece of video design by Peter Nigrini. The lower class passengers surrounding Alice contrast vividly with the wealthy wedding world she is leaving.  The train passengers sing exuberantly about her budding love with Dubey, making their love universal—and touching us all.

“Monsoon Wedding,” like Nair’s 2001 movie, channels Bollywood with its colorful dancing, beautiful choral singing, stories of thwarted love, and joyous dancing in the rain. We are drawn into the story of the Verma family as they build the lavish wedding decor, meet the American in-laws, and reveal their secrets, desires, and dreams. We recognize the tensions and squabbles that pull a family apart and the glue and desires that draw them together.  Tender scenes move us to feel compassion for a family struggling with modern conflicts between Indians and Americans.

Composer Vishal Bhardwaj supplies us with a wonderful array of duets, solos and choruses, infusing traditional Indian melodies with pop sensibilities.  Susan Birkenhead’s lyrics evoke moods from the bawdy teasing of the bride with “Aunties are Coming” to tender duets, like Hemant and Aditi’s “Could You Have Loved Me?” We hope for a happy ending and we are rewarded.

Amidst all the frivolity and happiness, Director Nair raises crucial issues. She pits ancient traditions against modern values, a woman’s rights against her family’s pride. She subtly exposes the imbalance of wealth and poverty in India—where magnificent bridal gold and silk jar with plain robes and rags. While “Monsoon Wedding” has an overall comic and celebratory vibe, it leaves us with questions about social class.  “Monsoon Wedding” thrills with the irrepressible Indian exaltation of life. Nair’s musical “Monsoon Wedding” delivers spectacularly.

“Monsoon Wedding” is directed by Mira Nair,  based on the book by Sabrina Dhawan, at  Berkeley Repertory Theatre, through Sunday, July 2, 2017. Info: berkeleyrep.org