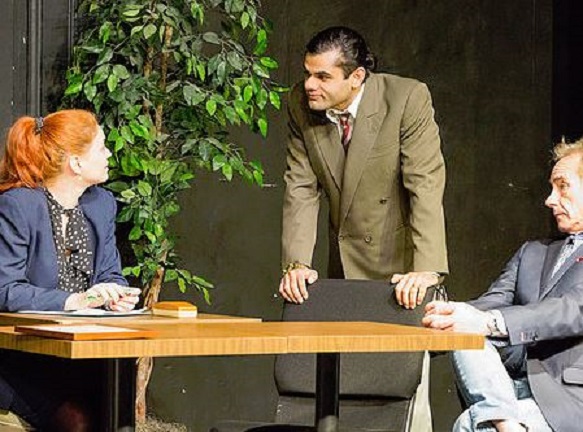 For thirty years I worked for unions—representing members on both sides of sexual harassment charges. For me, Firescape Theatre’s “Brilliant Lies” achieves the impossible by taking us past the bullshit and into the realites of these showdowns. David Williamson shows how facts matter little, while the “lies” reveal far more than they mask. It’s how a person feels about the facts that matters. It’s what motivates the lies that matters. In a patriarchy, where power often underlies sexual encounters, you find a curving road to the truth.

Twenty years ago a sexual harassment suit was big news, horrifying many men. As one baffled businessman grouses in “Brilliant Lies”: “Sexual harassment, land rights, affirmative action, and multiculturalism. Our moral agenda is being dictated by Gay Armenians and Lesbian Turks!”

(And I thought my father had cuckoo politics.)

“Brilliant Lies” uses a 1997 sexual harassment case to take on the most fascinating sides of life: sex, power, and a dysfunctional family. Colorful characters struggle to spot the truth, while wrestling with their own demons. What seems at first a matter of conflicting accounts grows into an probing exploration of American life.

Clerical worker Suzy (a very hot Lauren Bryn), fired and furious, files a harassment charge against her insufferable boss Gary (the offensively cocksure Zanfer Ali). Marion, a government investigator (the patient, wry Diana Roman), must sort it all out. Marion’s job has made her a skeptic—with a sense of humor. When she’s asked if she is shocked that a young woman might take “Ecstasy” and have causal sex, Marion replies: “Yes, as a married woman, sex and ecstasy do seem a startling combination.”

Marion evaluates Suzy’s and Gary’s clashing stories. We doubt both. Will we ever know what happened?

As Suzy, Bryn gives a stand-out performance.  Provocative in dress and attitude, Suzy defies co-workers, family, and convention. She handles conflict by making a quick exit. She’s a high maintenance pleasure-seeker, as a worker or family member. And her family looms large: Suzy demands support from her family in her lawsuit; and her siblings need Suzy to deal with a demanding and declining Dad.

The Dad, Brian (jaunty Andrew Harris), is Suzy, Katy and Paul’s, father, and I hope to God, you do not have such a father. A heedless, jovial man with a mercurial temperament, Brian is broke and ill. He needs help from his kids. And his kids need to be saved from his parenting. A dangerous trade-off is at work here.

Sensible older sister Katy (down-to-earth Melanie S. Hahn), is gay, tough, and ready to help. I really like Katy. Hahn plays her as the older sister all we all wish for.

Suzy’s boss and nemesis, Gary, needs to intimidate in every meeting. Gary’s manager, Vince (the upright Dermot Durnin), an old-school businessman, faces the thankless task of riding herd on a bully. Both businessmen, boiling at the harassment charges, see the whole affair as sheer blackmail. They believe that the accused male will always appear guilty, suffering suspicion and gossip, no matter the verdict.

When Marion is accused of bias, she replies, “I’m on the side of the truth.” She surprises us by finding the truth behind Suzy and Gary: a story startlingly different—and more appalling—than either original account. Then, Suzy’s family surprises us by confronting their secrets. Truth turns out to be messy, in law, in families, and in individual morality.

In Act Two, the man sitting next to me brushed his arm against my breast, and I almost decked him before realizing it was an accident. Poor guy, he was about to suffer the consequences of all those perverts who troubled me in subways and movie theaters decades ago. David Williamson would understand.