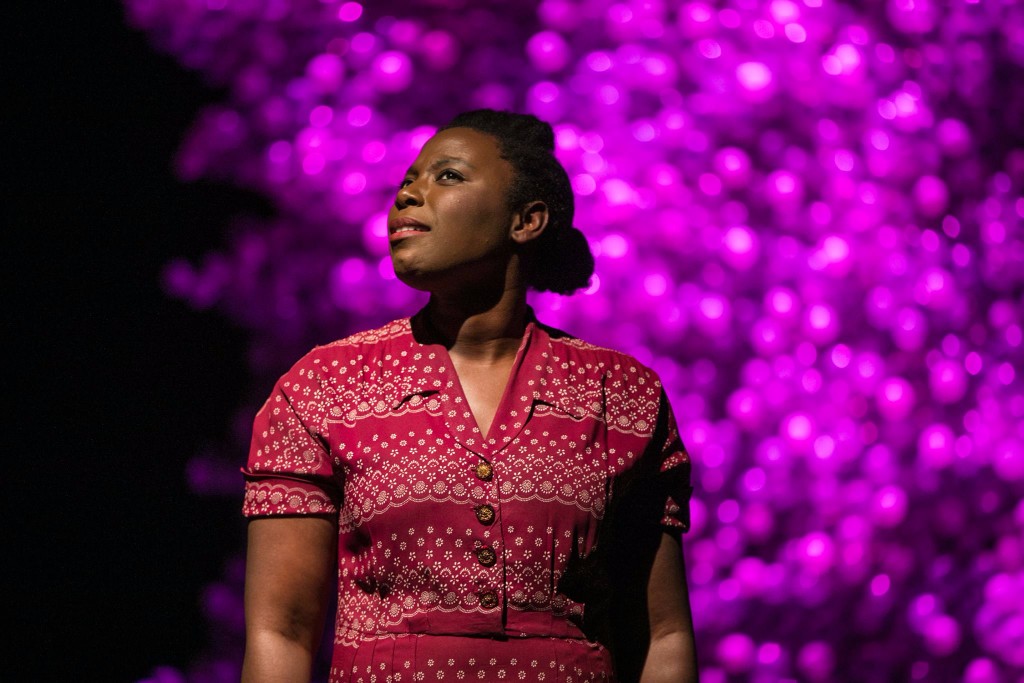 TheatreFIRST has a World Premiere at Live Oak Theatre that you will talk about for weeks. “Hela: The PoeticScientific DreamFate of Henrietta Lacks” by Lauren Gunderson and Geetha Reddy breaks free from gravity and takes off into our future. Based on the life of an African American woman whose cancer cells gave rise to the “immortal” strain of cells that revolutionized scientific research, “HeLa” takes us on an adventure in science, with love and compassion.

Playwrights Gunderson and Reddy let us fill in the emotions that arise, as Henrietta dies and her cells become a scientific wonder, helping Jonas Salk find the cure for polio. We are there for the revelation—at the hands of strangers—when a young doctor exposes the source of those “immortal” HeLa cells.

The word HeLa was used to disguise the name of Henrietta Lacks, when she died in 1951, at the age of 31, and her tumor cells were harvested. They were deposited at Johns Hopkins Medical School in Baltimore, Maryland. Although her cell strain has become essential to modern medicine, her daughter Deborah and family members only found out about the cells many years later, in 1975. Henrietta Lacks was never consulted about the harvesting of her cells, nor was her husband.

The play, an emotional docu-drama, keeps us searching for answers—as bits and pieces of Henrietta’s life take shape before our eyes. On the stage in Berkeley, Jeunee Simon plays a confident, wise, and self-aware Henrietta, who loves her husband, played warmly and winningly by Khary Moye. In “HeLa,” six versatile actors play a carousel of roles, moving intriguingly back and forth in time. The fast-moving scenes rivet our attention, as though we, ourselves, are researching multitudes of cells. “Hela” offers a moving kaleidoscopic journey to the heart of a woman and her family.

At the back of the stage, mysteriously illuminated, there hangs a abstract sculpture of what may be Petri dishes or maybe a multitude of cells. These plastic bubbles reflect colored light, changing variously during the show, creating  a rainbow of moods and feelings. The singular, beautiful sculpture changes colors, as Lacks’ life and her daughter Deborah’s life stream by.

Henrietta’s daughter, Deborah, who barely knew her mother, is played by the mesmerizing Desiree Rogers, with sharp edges and touching sensitivity. Rogers grabs our attention and holds it with the changeable, injured personality of Deborah Lacks. Deborah stands in startling contrast to the spirit and the ghost of her mother. Henrietta’s warmth and wit, alongside of Deborah’s pain and struggles, form the beating heart of the family and the social justice drama. Once again, we see how Black families in the U.S. have served us all, at great cost to themselves.

Director Evren Odcikin and Dramaturge Lisa Marie Rollins fill the stage with a whirlwind of fast-paced scenes. We feel the love between Henrietta and her husband, played soulfully by Moye. The beautiful movement and emotions offer a first-hand experience of Henrietta’s treatment at the hands of a doctor, played by Richard Pallaziol, in a touching and heartfelt hospital scene.

A young doctor, played by Sarah Mitchell, reveals to Deborah the source of those “immortal” HeLa cells. Akemi Okamura rounds out the graceful ensemble, embodying people who touch Henrietta’s and Deborah’s trajectory.

The confrontation between the young woman doctor and Deborah, a doubting and hurt daughter, is heart-stopping. And the resolution between the long dead mother with her daughter, after long silence, brings the drama to a beautiful and touching conclusion. You want to be there for every moment of the Gunderson’s and Reddy’s profound “PoeticScientific DreamFate of Henrietta Lacks”—a story that was suppressed for years for vast profit and greed—that is now being told, with great artistry, at TheatreFIRST.