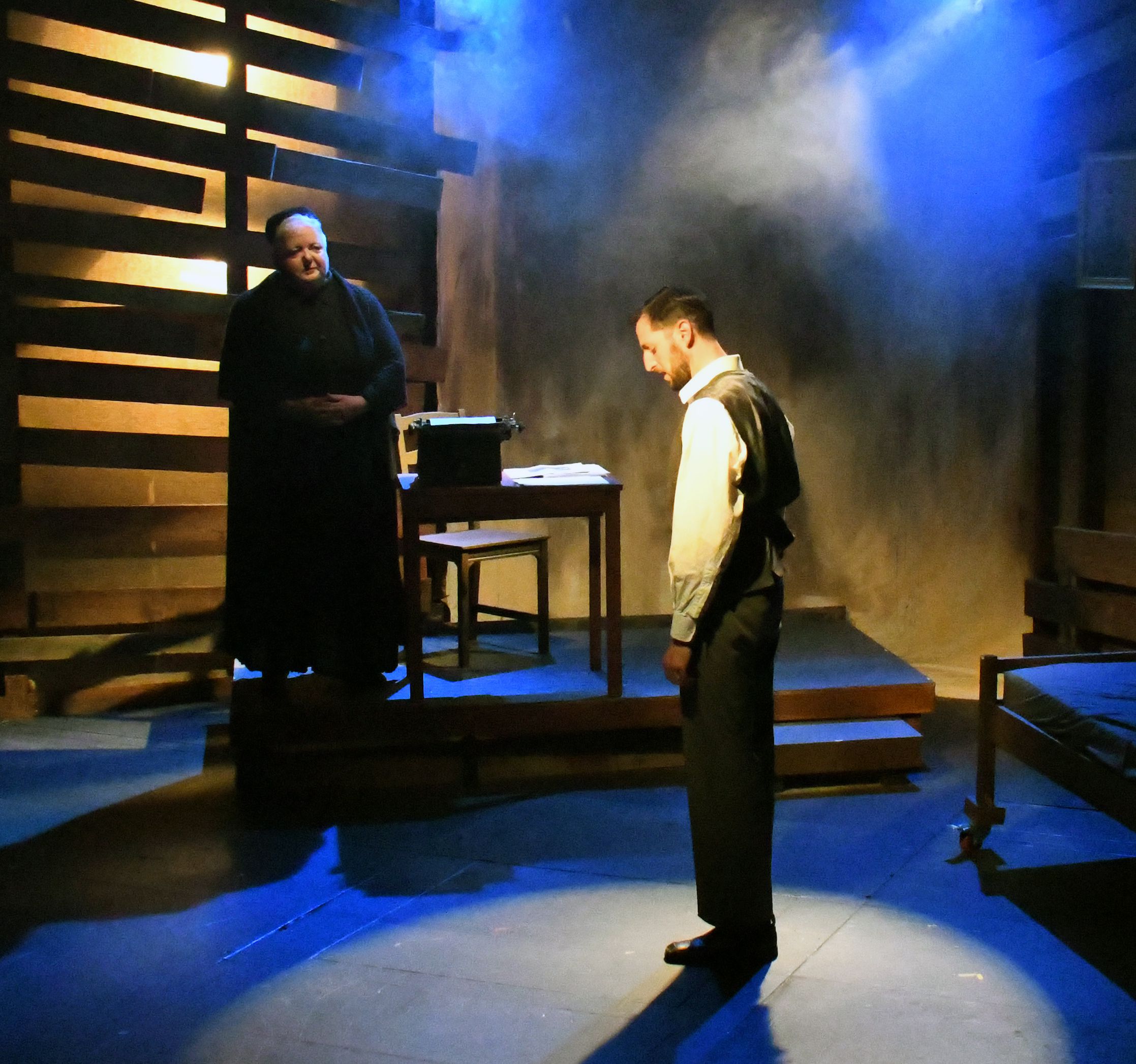 2017 marks a resurgence of Russian collusion, Neo-Nazis, and American nationalism. What marks the dividing line between shady Russians, and white male oligarchs, like D.T., who now represents the much trumpeted “Freest” country in the world? It’s getting hard to tell.

In true Vonnegut style, Katz’s play defies the chronological timeline of Howard W. Campbell, Jr.’s life. In the frame-story, Campbell, an American traitor, writes his memoirs from an Israeli prison cell. From his pit of melancholy, he transports us to his sojourn with the Nazi Party, to his intimate moments with his wife Helga, and to his post war isolation.

Bilodeau transforms the small, quaint space into a boundless, flexible stage. Protaganist Campbell narrates his memoir at a small table, backed by wood and brick walls. From behind a screen, ensemble members comment on the action.

With a touch of a button, Kurzunski changes the mood, and the time. One moment he uses bright yellow light to interrogate Campbell. The next moment, he shows us a dark stage, illuminated only by a painting of Adolf Hitler.

Lead actor Chris Morrell plays our protagonist Howard W. Campbell Jr.—an American living in 30s Nazi Germany. Campbell has a talent for writing in German, and becomes a successful Nazi propagandist. Consistent and confident, Morrell brings a multitude of emotions to his character. Morrell describes his prison guards in Israel with a chilling objectivity.  Later, he gives us a convincing portrayal of the dejected traitor, slouching in a Manhattan attic.

Each supporting actor plays a number of characters, switching costumes in an instant, bringing a new accent, aura, and affect to each new person. David Boyll shows his diverse range: first, he portrays the Nazi Captain Bernard B. O’Hare—dressed in military uniform, moving quickly and decisively. Then, he plays a drunken WWII veteran who is volatile and unpredictable, with a thick Brooklyn accent.

AJ Davenport puts her talents on display when she switches with ease from Campbell’s fairy godmother, and American CIA informant, to a pensive and wary mother.

As “Mother Night” moves from the 1930s to the 60s, Katz portrays a reality native to each decade. Campbell’s uncomfortable post war sadness evolves into the pensive and reflective melancholy that radiates from his jail cell.

In “Mother Night,” Brian Katz asks us to look at reality of history and its parallels in the present. Kurt Vonnegut’s prophetic moral warnings ring as true as they did during the Cold War: “We are what we pretend to be, so we must be careful what we pretend to be.” We are treading in deep waters in our perilous age of “fake news.”

Custom Made’s drama exposes the art of fakery, propaganda, and “alternate facts.” Custom Made’s unique and enchanting version of Vonnegut lets us see how our News Feed can be held hostage. “Mother Night” can liberate us to see facts, truth, and ideology in a new light. You will be profoundly pleased and surprised to enjoy the secrets of “Mother Night.”