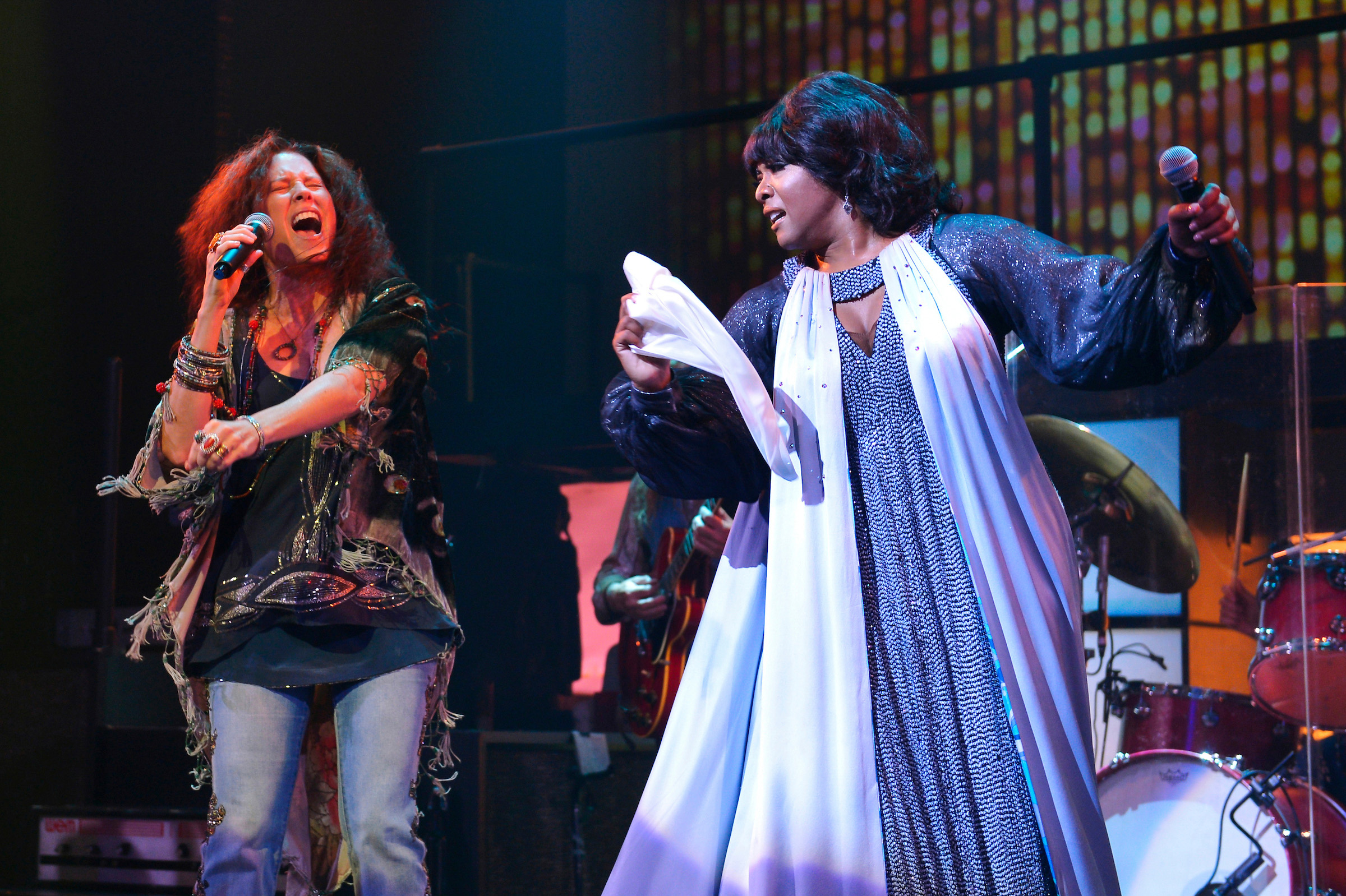 “A Night with Janis Joplin” is billed as a musical journey celebrating the soulful singer and her greatest musical influences. It is much more. It’s an invitation to meet Janis long before she became known for that unmistakable voice, and to follow her as she evolves into a 60s legend. The show transports us to the Blues before Joplin, bringing to life Etta James, The Chantels, Bessie Smith, Nina Simone, Odetta, and Aretha Franklin. And as Janis, played by the captivating Kacee Clanton, swigs whiskey between songs, we see dark shadows encroach on this larger-than-life singer.

Clanton’s portrayal of Joplin works an uncanny magic. She looks the part, with flowing, frizzy brown hair that she flips nonchalantly, flared jeans, a colorful, bell-sleeve blouse, long necklaces, and a gold vest that looks just like one Joplin wore on “The Dick Cavett Show.”

Then there’s the voice. It’s absolute Joplin in all her throaty, bluesy, yearning, no-holds-barred glory. She has the voice of a lioness—confident alpha, a purr one minute, a husky roar the next. Add uninhibited body language, hectic energy, spot-on slang, and a passion for all things music, and we fall in love with Clanton’s Joplin, and deeper in love with Janis.

All four of the women representing Joplin’s early influences have a type of supernatural power too, thanks to excellent costuming and casting. Ashley Tamar Davis is haunting as Nina Simone. Later, in a spirited duet with Joplin, she gets the entire reluctant audience on its feet right.

Sylvia MacCalla delights as both Odetta and Bessie Smith. Tawny Dolley twists and shakes her hips as Etta James, showing off her moves as well as her voice. But the most riveting co-star performance comes from Sharon Catherine Brown, playing an “everyday woman,” feeling the Blues. Brown momentarily hijacks the show with a number that starts with a simple musing about where the time goes, and what love is, and ends with an epic display of vocal power, range, and emotion.

“I just want to feel as much as I can,” Janis says. Each reminisce is punctuated by pulls from a bottle of booze Janis throws back, unapologetically. Sometimes the plunge in mood is palpable. Where is our lioness? Who is this lonely, uncertain Janis? Watching her suffer, we feel uneasy, because we know how her story ends. But this Janis can’t imagine not singing, not feeling as much as she can for as long as she can. And she puts us right there with her.

“Stay with me baby,” she croons in the final number, a bittersweet anthem from a star taken at the height of her career.

“A Night with Janis Joplin,” written and directed by Randy Johnson, debuted on Broadway in 2013. The show packs in a whopping 25 songs, many of them full length, and many of them pumped to such epic proportions that some trimming could help. The level of intensity that is sustained is frankly exhausting after the first hour and a half, let alone two hours plus intermission.

Those with sensitive ears might want to bring light earplugs. After all, it’s more of a concert than a play. An inventive period piece, a tribute concert, and a rare psychological analysis all rolled into one, “A Night with Janis Joplin” is a must-see for Joplin fans and Blues lovers.